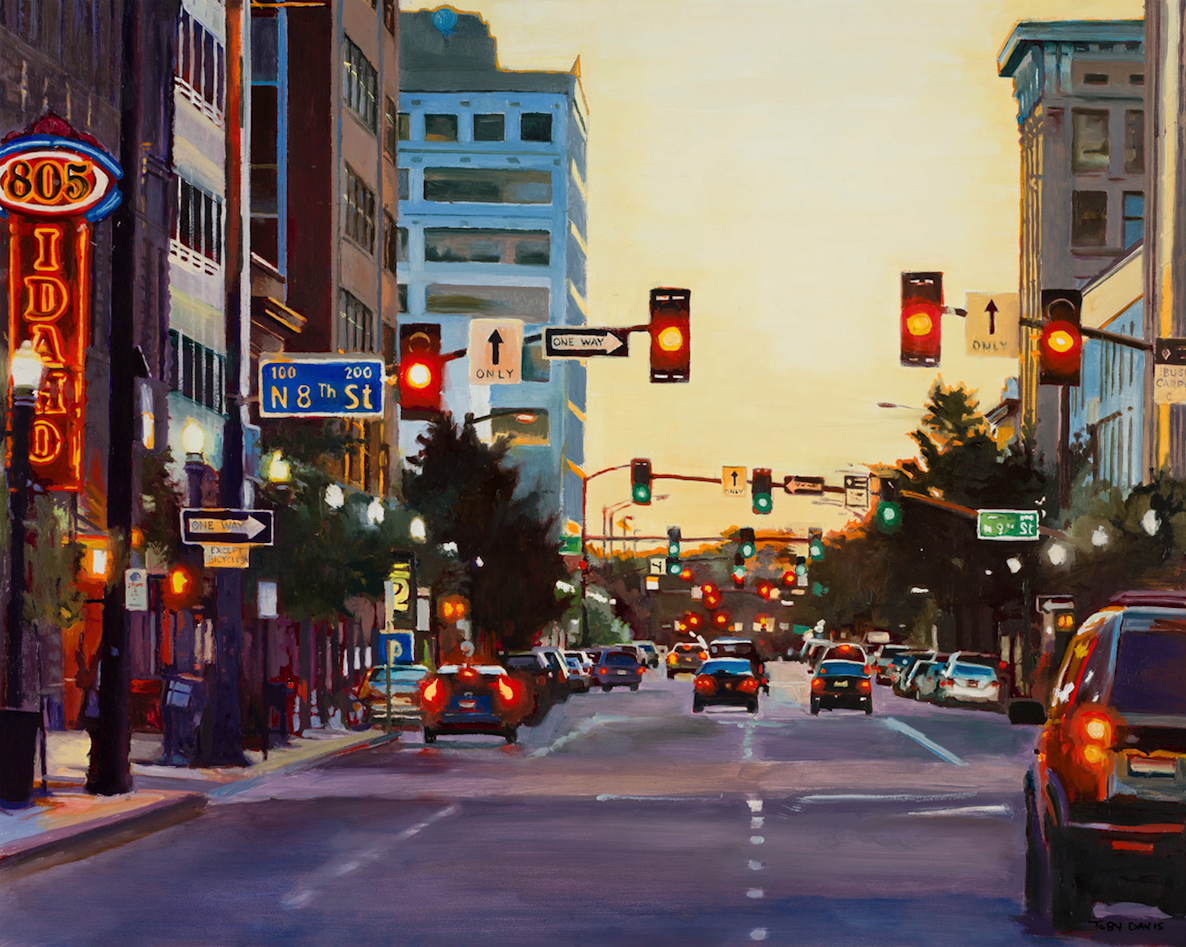 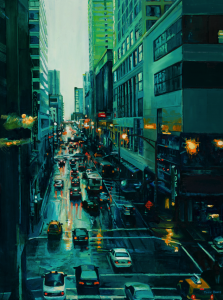 and the 10 Barrel Brewing Co.–to name a few– are all featured in Davis’ sweeping urban portrayals. Capturing the essence of a city is integral to the Eagle-based painter’s work.  He said, “So much of our lives are tied up in the memories of place. I want to preserve those memories forever.”
To do this, Davis first immerses himself in a location. “It starts with walking the streets of a city, taking photographs of scenes I find interesting,” he explained. “A lot of times it’s local, but I try to travel at least once a year.” He has painted scenes from Chicago, Portland, New York, Los Angeles, San Francisco and more. Last year, the artist spent a week studying the streets of Paris. “My iPhone app said that I had walked over 19 miles in one day, 48,000 steps, 44 floors climbed (Paris isn’t flat).” By the end of the trip, he had tossed his worn-out sneakers and snapped 2,800 photos.

Davis clarified, “It sounds fun, but I take it seriously. I would describe it more as ‘interesting work.’”After the locale has been photographed, Davis “searches for the best photos, edits them down, and creates an original painting.” The results are rich cityscapes that capture the mood and life of the place.

Davis was born and raised in the Treasure Valley, and his family holds long ties to the Eagle community. “I’ve heard many stories about going to Orville Jackson’s back in the day, and I think my grandfather, who is in his 90s now, still gets his hair cut at the Eagle Barber Shop. I can’t imagine how many haircuts he’s gotten there. More than a few.”

Davis moved to Eagle four years ago, and his deep connection to the place manifests in his artwork. The town is featured prominently in a series of paintings that pay homage to last winter’s record-setting snowfall.

In 2008, Davis earned a fine arts degree in illustration from Boise State University. He found the instruction formative and says he has “a lot of gratitude for the direction my professors gave me. I couldn’t have done this without them.”

Nothing pleases the painter more than finding the right audience for his work. “I used to get very attached to my work and hated to see it go, but now the opposite is true. It’s difficult when a painting hasn’t found the person that needs it. I have a great sense of relief and accomplishment when my work finds a good home.”

Painting is a way for Davis to capture other people’s sentimental experiences. He wants to “give people something they can look at and remember how great that place was, or how great it will be to visit again.” Davis said, “A painting on a wall can become a window to a place you cherish.” This isn’t just something Davis believes, it’s something he proves in each painting.

Previous articleRedlan’s Gentelman’s Grooming: A Cut Above the Rest
Next articleTalking Points (Sept/Oct)