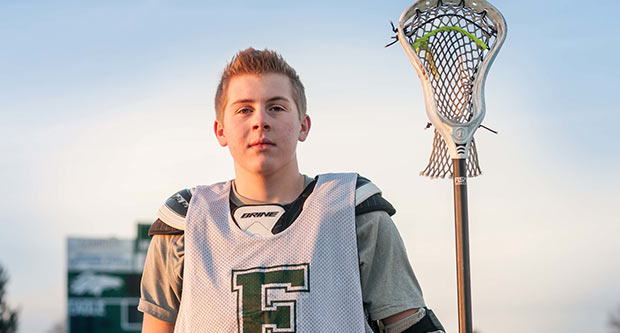 “No matter how well I played that day, I can always do better.  Whether it is running, endurance or footwork, I can always practice harder, play harder to reach those goals!”

Eagle High junior Connor Armstrong, 17, first became interested in lacrosse five years ago, when his mom suggested he try it after he missed football tryouts when they moved to Tampa, Florida.

For those unfamiliar with the game, Connor describes it like this: “Lacrosse is a lot like hockey and soccer.  We call it the fastest sport on two feet.  Lacrosse is full contact where all players carry a stick with a mesh pocket to throw and carry the ball.  We play on a field or turf with two goals on each end that are 6 feet wide and 6 feet tall.  Winner simply outscores the other team.  I love how physical it can be.”

“I play LSM (long stick middle) and Close D. Both are defense positions and my job is to protect my goal keeper and make sure the other team doesn’t score,” he continues.

To see this young man and his team in action, check out the Eagle High School team.  If you want to see intense lacrosse action with teams from five different states, Boise is hosting the Boise Invitational March 19-22, where 16 teams—including Eagle—will compete.

Lacrosse will keep Connor traveling quite a bit this summer.  In early July, Connor will participate in BLUE CHIP 225’s recruiting showcase. Later in July, he will play in the Maryland Lacrosse Showcase in Baltimore for around 80 coaches.  In August, Connor will be playing for Team USA U19 Men’s Lacrosse in the United Kingdom.

“I am an Idaho Lacrosse Ambassador and that’s part of my job—I talk to younger kids and their parents and tell them how great lacrosse is and that they should give it a shot.”

“I am very honored to be a part of this and play with other players from around the United States. We will be traveling through Scotland and England to play four or five games against their junior National Teams and a couple local clubs.  We get to meet with the coaches and it gives me international visibility with some great coaches from all over the world.  I can’t wait to interact with the teams from Scotland and England—it will be the experience of a lifetime.  Being honored with a spot on the roster of Team USA also means a large expense for me to get there. I have a page on GoFundMe.com/connorarmstrong to help me reach my goal to get to the United Kingdom—please check it out!”

“In addition to Team USA, I was notified that I made the True Lacrosse Idaho All Star team as well.  We will be traveling to compete in several tournaments this summer in Denver, Chicago, and in Oregon.”

You can also see Connor playing lacrosse for Boise United Elite, his travel team—check them out at boiseunited.com.

Connor likes living in Eagle with his parents, Will and Amber, and two dachshunds Sookie and Sally.  His older brother Tayllor Amstrong, 19, is a sailor in the United States Navy currently stationed in Pensacola, FL.

“I am very proud of my brother and miss having him around, but now we can both say we represent our country proudly,” Connor says.

Connor has lived in Seattle, Dallas, Jacksonville, Kuna, and Tampa.  Connor is happy to be back in Eagle because he loves his friends here.  “I like the environment and the people are so nice here.  I like the small town feel, especially after living in Florida,” Connor continues.

Connor’s favorite classes at Eagle High are history and computer integrated manufacturing. When asked why, he speaks in high esteem of his teachers. “They make the classes fun and interesting so I actually want to be there,” he says.

Connor’s favorite lacrosse player is Paul Rabil, “because he is such a showman.”  When asked who inspires him, Connor answers, “I know it seems corny but my parents inspire me.  We have moved all over the country, we’ve had a lot of adversity and challenges as a family, but they always keep it real.  They would move heaven and earth for my brother and me.  I am lucky—my parents rock!”

Connor has some tips for aspiring lacrosse players: “Footwork (start jumping rope daily), speed (run sprints),  work on your endurance by running daily, learn the game, watch it on YouTube or  ESPN, read about it, and most importantly, if you decide to pick up a stick and play this awesome sport, remember to have fun with it!”

“I am an Idaho Lacrosse Ambassador and that’s part of my job—I talk to younger kids and their parents and tell them how great lacrosse is and that they should give it a shot.”

Previous articleTips for Happy Teeth
Next articleRenew You