We are Pes-Wies! “Payroll. The Easy Way.” 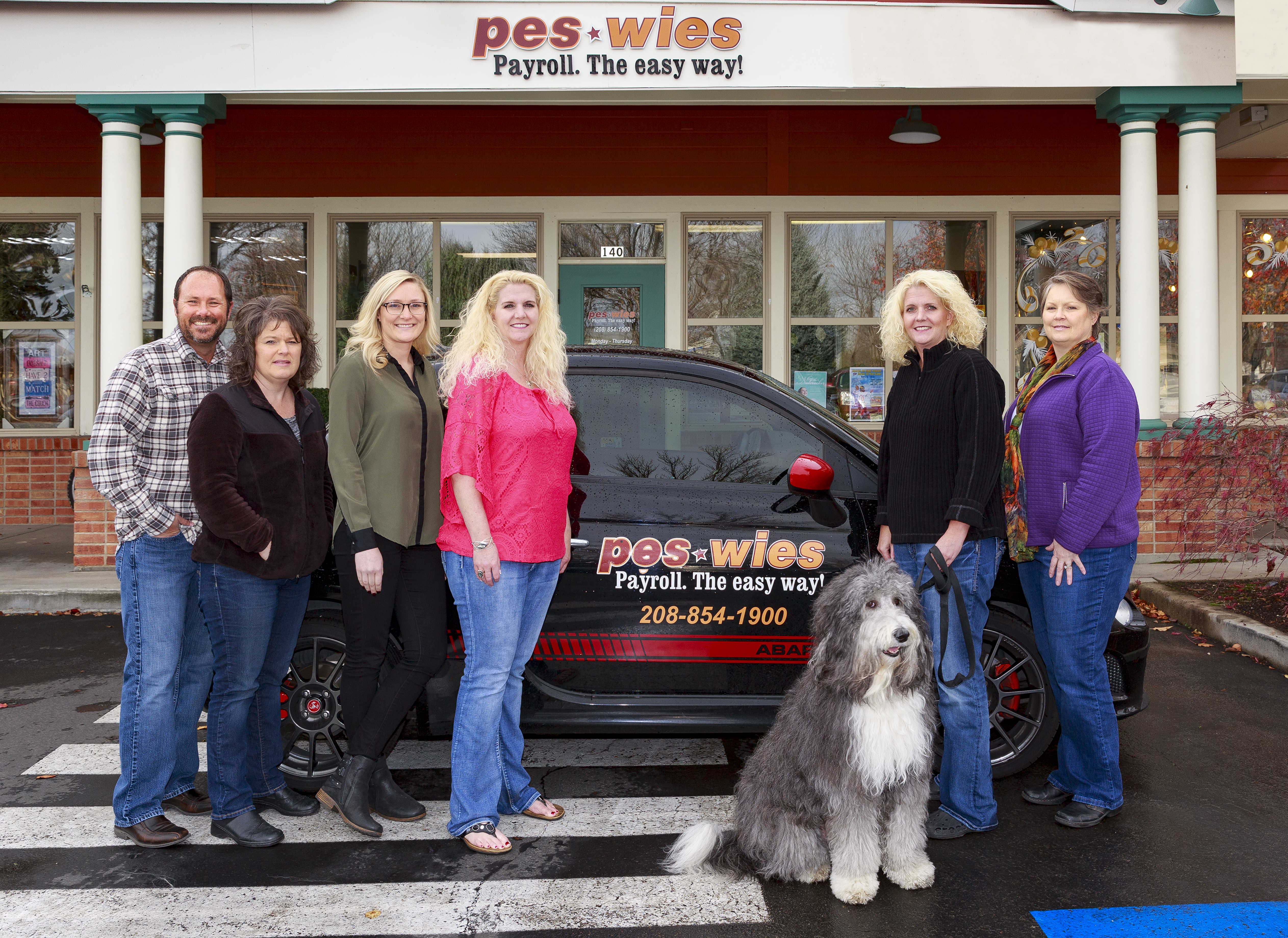 As you step into the office, Star Wars movie characters of eye-popping proportions spectacularly greet you, daring you to believe that the payroll and tax administration business can be fun! The doorway presence of Darth Vader, a Stormtrooper, and the towering Jar Jar Binks sure hasn’t slowed progress at Pes-Wies (styled pes-wies), which has doubled its clientele since moving to Eagle five-plus years ago.

“It lightens the mood,” said Darcy Proctor, who co-owns the business with twin sister Marcy Brown. “It can get stressful here on heavy paydays, so having the casual atmosphere really lightens the load.”

Their business is run with the same enthusiasm that they pursue their nearly lifelong love of the movie franchise. Marcy and Darcy met Mark Hamill, who played major character Luke Skywalker, and watched Star Wars creator George Lucas up close after they camped in line prior to a big event. They even visited private Skywalker Ranch in northern California. The sisters have even traveled to Las Vegas to watch the new Rogue One: A Star Wars Story.

Marcy and Darcy, born in 1975, two years before the first Star Wars film came out, have memorabilia for their homes and cars. In their office on South Rivershore Lane, they have six movie-release posters and various three-dimensional figures. Blow-up versions of the Darth Vader and R2-D2 characters are added for Halloween, followed by a Star Wars-themed Christmas tree.

“The office is kind of an extension of us personally, so it makes us happy,” Marcy said. “Also, it breaks the ice and makes people feel comfortable.”

She and Darcy, who both studied at Idaho State University, formed what’s now pes-wies – a name that combines Western Idaho Employee Services with broader initial incarnation Professional Employee Services – in 2001 after working in retail. The business aspires to save time and costs for clients ranging from Mom-and-Pop stores and local service providers to corporations.  Originally, the business operated on Fairview Avenue briefly before moving to Lakeharbor Lane, both in Boise, and then to Eagle.

An up-and-down workflow tied to client payroll cycles and tax reporting deadlines characterizes the business. A light, fun atmosphere keeps the owners and their four employees on track whether they are in the midst of hectic days with many tasks due immediately or preparing for the next high-volume day, the sisters said.

Recently, the business has added offerings such as online tools for employees.  With Eagle’s growth and accessibility as a community, referrals have been strong, and pes-wies marketing efforts have been well received.  As a result, pes-wies has grown its staff following several years of significant growth.  Many new clients are experiencing their own growth as well, creating in an increase in their administrative requirements, which pes-wies excels at.

As for the entrepreneurial twins and their private Star Wars experience, their Skywalker Ranch visit materialized in the late 2000s. The Skywalker Sound finance and operations director, whose brother had noticed the sisters’ Star Wars collectibles shortly after buying the office building where they were based, led them on a personal tour of the ranch.

“We got to see them mixing sound for one of the Pirates of the Caribbean films, and we got to see the conference room where George Lucas does a lot of interviews,” Darcy said. Marcy said she held an Academy Award the studio earned for another film’s sound work.

It was at a Star Wars celebration in Indianapolis where they had front-row seats to see Lucas speak, and where Hamill struck up a conversation with them after noticing they were twins.