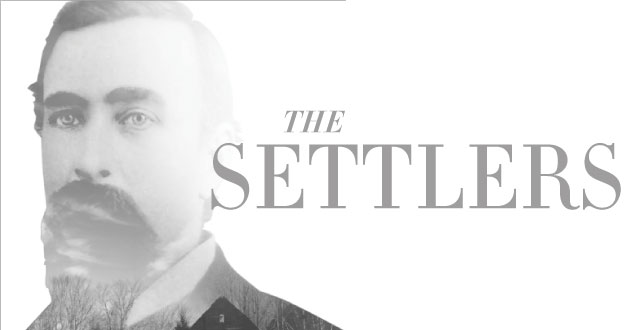 It was a hard life!  Almost anyone living in our comfortable modern world would certainly believe so.  It was frontier life.  For many of them, it was a great adventure.  They all came from somewhere else, eager to make their mark on this exciting western landscape.  That landscape was already populated with a completely different culture, the Native American.  There were the predictable tensions and clashes. Still, their story was one of seizing opportunities and sharing the growth and fortune with their community.

One of the earliest to settle in Eagle was Truman Coe Catlin.  Truman arrived December 21, 1839, the son of Thomas Merrill Catlin, a prominent resident of
Farmingdale, Illinois who himself had pushed west from Connecticut. Truman would become one of Idaho’s largest ranchers in the true tradition of the old west.

The family’s affluence would allow Truman the opportunity to attend Knox College in Galesberg, Ilinois.   Whatever providence had provided Truman in Illinois, it was not strong enough to secure his interest.  He departed in 1862, traveling by boat and by horseback to seek his fortune on the American frontier.   The 43-year old Truman eventually joined an Army Troop headed for Fort Benton, near Walla Walla.  They had many adventures along the 3,200-mile trek; hard winters, stolen horses and several killed of their party.  Truman finally arrived in the Boise Basin a year later.

He worked as a miner for $6 a day, a princely sum to many of that time.  He accumulated some capital and could see growing crops to feed the hungry miners promised a more stable future.  He homesteaded 160 acres the government was offering on Illinois Island.  He built a 10 x 12-foot log cabin on the island for his family of three

Ever the entrepreneur, Truman hauled a dugout from Silver City to ford the Boise River that became the Silver City ferry.  He contracted with the Army to provide 100,000 shingles to build Fort Boise.  In 1873, Truman met and married Miss Mary Smith of Yreka, California. 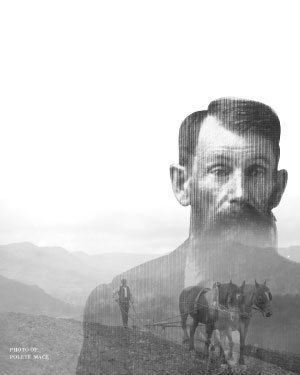 In 1876, with three partners, he led the first cattle drive eastward from the west, driving 1,000 head to Cheyenne, Wyoming.  Over the next 45 years, he would drive herds as large as 3,000 head to Cheyenne and on to Nebraska.  The Country became involved in WWI and by 1917, all his cowboys were in the Army.  He sold his 3,500 head and went into dairy cows.

Truman and his close neighbor, Polete Mace, had many adventures delivering food to the valley from the newly named Eagle Island.  Most notably crossing the Boise River at flood stage, enduring brutal winters in minimal shelter and building the first canal to serve the area.

Another close neighbor and occasional business partner was Thomas Hugh Aikens.  Many consider Tom the “Father of Eagle” as he owned 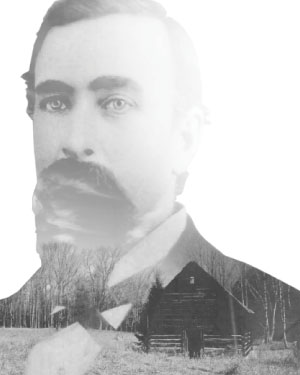 most of the land upon which the village was established in 1904.  This son of Scottish immigrants was born in Nova Scotia in 1845, where he became a surveyor by trade.  We can only assume that the availability of free land was what led Tom to venture west.  He claimed acreage on Eagle (then Illinois) Island and obtained his first Water Rights in 1877.

One Mary Conway, 20 years his junior, caught Tom’s eye a few years later and they were wed in 1883.  He moved his new bride to his homestead on the island.  Their only neighbors were the Catlin’s and the Mace’s.

Twenty years of hard work and shrewd investing made Tom, Mary and their three surviving children quite wealthy.  In 1904, he moved his family to a bungalow in Eagle and built a frame building to serve as the high school.  Later, he would build the 14-room Old Eagle Hotel.  His many business ventures allowed him to acquire more than 600 acres around Eagle.  He planted highly profitable orchards of walnuts, butternuts, hickory nuts and apples, not to mention hardwoods and poplar trees for the building industry.

After almost 20 years of struggle together, the couple divorced.  When affairs were settled, Tom left for a new home he would build in Long Beach. California. 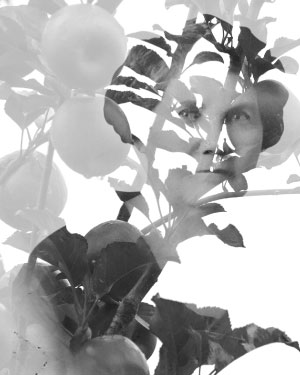 Mary would follow him some years later and the couple eventually were remarried.  Tom’s habit was to spend his summers in Boise, where he died at age 79.

Tom’s neighbor and friend, Truman Catlin had left family back in Kansas.  So when his father was killed in an Indian uprising, Frank Short and his brother travelled west to live with his maternal uncle Truman.  Truman’s homestead on Eagle Island had grown substantially and he had diversified into raising cattle for market as well as Jersey and Holstein dairy cows.

In 1887, Frank returned to Leavenworth, Kansas for two years, but on his return, married Mary Catlin’s sister. He became manager of a farm that Truman owned west of Eagle.  Over time, he made enough to buy 320 acres of the farm.  On 55 of those acres, Frank planted a plum orchard.  It became quite successful and he soon added a packing plant for his prunes.  He hired local women to work the plant and his success continued to grow.  He became the prune magnate of Idaho shipping his produce far and wide.

Frank and his family built the elegant cobblestone home that still adorns the north side of West State Street in Eagle.  Frank and all his neighbors bought Quong Strawberries from their neighbor Louie.

Louie came from a small village in southern China.  Most of his fellow travelers were imported to work the mines, but Louie wisely took a different road going into agriculture.  He arrived in the area with his brothers in 1897.

Unable to own land because of the laws at the time, Louie rented a small patch of ground to raise vegetables.  With success, he rented more land all over the valley and turned each into a valuable working enterprise.  After a few years, he brought his wife over from China and with his brothers worked the land, selling his vegetables door-to-door throughout the valley.  In 1924, he wife passed away leaving him with six small daughters to raise.

Mable, who would become the future Mrs. Quong, arrived in San Francisco from Hong Kong about 1930.  She had been sold by her father into slavery, but was

rescued by the local Presbyterian Church from the white slave trade.  Louie became aware of her circumstances through the church and traveled to San Francisco to meet her.  He and Mable married in 1931.  They returned to the farm where they raised another three sons and a daughter.

By 1936, the property ownership ban had been lifted and they purchased land in Eagle.  Although she had no background in farming, Mable was industrious.  They diversified into dairy cattle, chickens and finally in 1937, strawberries.  The venture took off and they hired local teens from around the valley to pick during the season.  Although risky because of potential low temperatures in the growing season, they were enormously successful.  Quong’s Strawberries became famous throughout the area.   The family would continue their business until 1989.

One cannot study the early settlers of Eagle without noting that, by and large, they were not only industrious, but a handsome lot.  While they endured numerous hardships, they also enjoyed great adventures together and began building that great sense of community we enjoy today in Eagle.