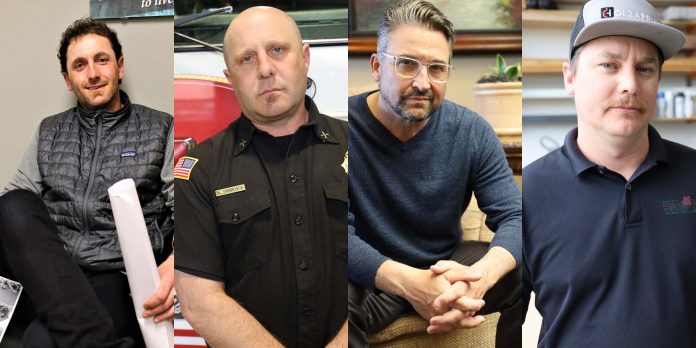 THE EAGLE COMMUNITY OVERFLOWS WITH AMAZING PEOPLE FROM ALL CULTURES AND WALKS OF LIFE. HERE ARE THE STORIES OF FOUR OF THOSE INDIVIDUALS, TOLD IN THEIR OWN WORDS.

How was your childhood different than most people?

I grew up in the town of Capljina in Herzegovenia, which is located in the old Yugoslavia, or the new Bosnia. It is in the foothills and the population is in the range of 28,000. It is a beautiful place that I never thought I’d leave. My father was a long-haul truck driver and my mom stayed at home with my little sister and me.

Capljina was less than a two-hour drive from Dubrovnik, which is a spectacular port city on the Adriatic where I learned to swim. Life was good.

But in 1992, our stable life disappeared. I watch the footage of the Ukraine and I share the pain of knowing how life can change overnight. My father was sent to a concentration camp – Camp Dretelj, which was near Capljina. For three years, in this warehouse, in rough and inhuman conditions, about three thousand people were held. For the suffering they survived, to date three people have been sentenced to 18 years in prison. The conditions were beyond inhumane. This was not during the Middle Ages. To give you a frame of reference, Full House, Seinfeld, and Law & Order were three of the most popular TV shows of the time, and Michael Jackson’s Black or White and Whitney Houston’s I Will Always Love You were topping the charts. Seems like yesterday? It was.

That’s why the real details of the next few years are still so fresh that my mind has kindly blocked them. I know that we made a pitstop in a refugee camp in Austria, then came to Boise when we were sponsored by my cousin. We left a comfortable life to show up in Boise in 1995 with a duffel bag and a lack of the English language. My cousin lived in a trailer – I’d never seen one, and I stayed in my cousin’s car the first night.

I learned English in ESL classes – I was in 4th grade. I think I learned most of my English while playing soccer with many new friends. Despite our circumstances, we always knew that our parents loved us and that they wanted only the best for us.

I am now grateful to call Eagle home. I embrace the opportunities and the freedom that it offers, and I know that my family is safe.

What was the most life-changing experience?

The murder of my best friend and brother, Gregory Holder.

In October of 2012, my wife and I celebrated the birth of Jackson and Rachel.
We already had two boys Reagan, five, and Riley, three. I grew up with three
brothers, so having four children was comfortable for me.

My big brother Greg was only 18 months older than me, and we were
inseparable – physically and emotionally. I called him just before the delivery
of my twins and we cried together over what I was getting ready to experience.
Just two weeks later, I couldn’t reach Greg and I knew in my gut that there
was something wrong. I called everyone I could think of and finally reached a
hospital that had a “John Doe” who was on life-support. “John Doe” was Greg.
He had been severely beaten with a lead pipe and left in the road to die – over
the $100 and the cellphone he had in his pocket. A few days later, he succumbed
to his injuries.

The elation of having my twins was shattered with the worst emotional pain
I have ever known. When perpetrators of this heartless crime were apprehended,
I found no closure. I had a hole in my soul that I firmly believed would never be
filled. I was angry at the men who took my brother away from me -I was sad
that my twins would never know their Uncle Greg. I hated the men that killed
my brother – I couldn’t understand why this had happened to me.

But it wasn’t long before I had an awakening that was maybe Greg’s grace
coming in through my tears. I wanted to forgive the men. The only hope I had
of being a present and loving dad, husband, brother, son or friend was to deal with this by turning to God. I was told to pray for these men – for their happiness, for peace in their lives., for them to find God. I sobbed through the prayers during the first few days and couldn’t bring myself to say their names. Though I knew that what I was doing was right, there were times when I felt that I was betraying Greg by praying for his killers.

It wasn’t long before the clarity of why I was praying shone through.

I could now refer to the men as “Michael” and “Andrew,” which humanized them for me. I felt empathy for them and the street-lives they had experienced as children with no one to teach them right from wrong. I had been taught right from wrong and I not only wanted their salvation, but I also wanted my children to see me as a man of God, and not an angry man.

It was then that I saw that nothing had been done “to me.” My brother had
been killed. I had not. This simple concept permitted me to be completely free.
I was free from resentment, from regret – and free to be a man that could set an
example for his family and his community. In short, I allowed God to power me
though my life. God can truly perform miracles. Let Him do that.

What is your greatest career satisfaction?

As an only child, falling asleep was never really a problem.

My imagination tends to run wild and at 44, people are still amused by my dreams, to the point where my co-workers bought me a book on dream interpretation.

I wake up crying, sweating, fighting, or just plain staring at the ceiling. This is a far different narrative than it was before I became a firefighter. The public experiences an average of three traumatic experiences in a lifetime, yet emergency responders average 36 traumatic events in a year.

In 2002, I responded on a call of a young girl that had been run over by a trailer. First responders are taught to think of what the worst-case scenario will be and usually it ends up being not as bad as we thought. This particular call could not have been further from the truth.

As I arrived in the scene, I saw a car full of crying children, an adult standing by the mailbox nearly inconsolable, and a devastated father standing next to his daughter who had just been killed. I have no doubt that God created us so that our bodies release adrenaline and cortisol to manage the trauma. You sort of enter an autopilot mentality
and do the job that needs to get done.

As my adrenaline waned, a wave of emotions shot through my body. I felt sick to my stomach. One of my fellow firefighters just had a child and he was in tears. This was the first call this firefighter had ever responded to. Hugging is not something we do very often, but this was one time when words didn’t help.

In recent times, we have been encouraged to voice our traumas. Our minds are like a water balloon you can only fill it with so much water until it pops. The nationwide suicides rates in the first responders community is staggering. Over the last decade in Idaho, we have lost more first responders to suicide then in the line of duty.

Working for the citizens of Eagle is an absolute blessing. I have mixed emotions every time someone thanks me for my service as my work is my life’s passion. I could have certainly pursued a position that would have paid me substantially more, but it would not have come with the greatest benefit of all – serving the public. I know with no uncertainty where I
will go when I pass on from this life. That may be why I have taken a personal pledge to risk my life for anyone, at any time.

What was your defining moment?

That’s easy! When I decided to separate myself from the family business to start my own passion.

My Grandpa started our family business in his garage in 1985. He was mostly building decks and fences before it became a large-scale remodeling business. I don’t remember a time when I wasn’t working. I probably started at the age of eight and was on roofs with a nail gun by the time I was 10. My friends would spend their summers swimming, and riding
bikes, but my dad would get me up at 5:00am to go to a job site.

The business was small, but very successful. There were employees who came and went, but the five of us – Grandpa, Dad, my uncle, our office manager Suzyand I, were solid. It was a close-knit family team and well respected. Everyone in town knew who we were, as we had worked on everyone’s home – or so it seemed.

I wanted to start my own legacy in my own artistic way using all the same familiar materials used in the remodeling world – but in a more creative was. I became a master welder and the more I tried to bury the feeling that I was not on the right path, the more it brewed. The choice to leave the family business was the hardest I’ve ever had to make. I didn’t want to let down my family, but I had to stay true to myself. We all do.

Three years ago, I decided to finally start my metal design business. It was terrifying. My dad tried to talk me out of it and the situation was rocky, but I followed my heart. It has sometimes been a struggle, but I wouldn’t rethink my decision for the world.

“If not now, when?”. The greatest quote ever.