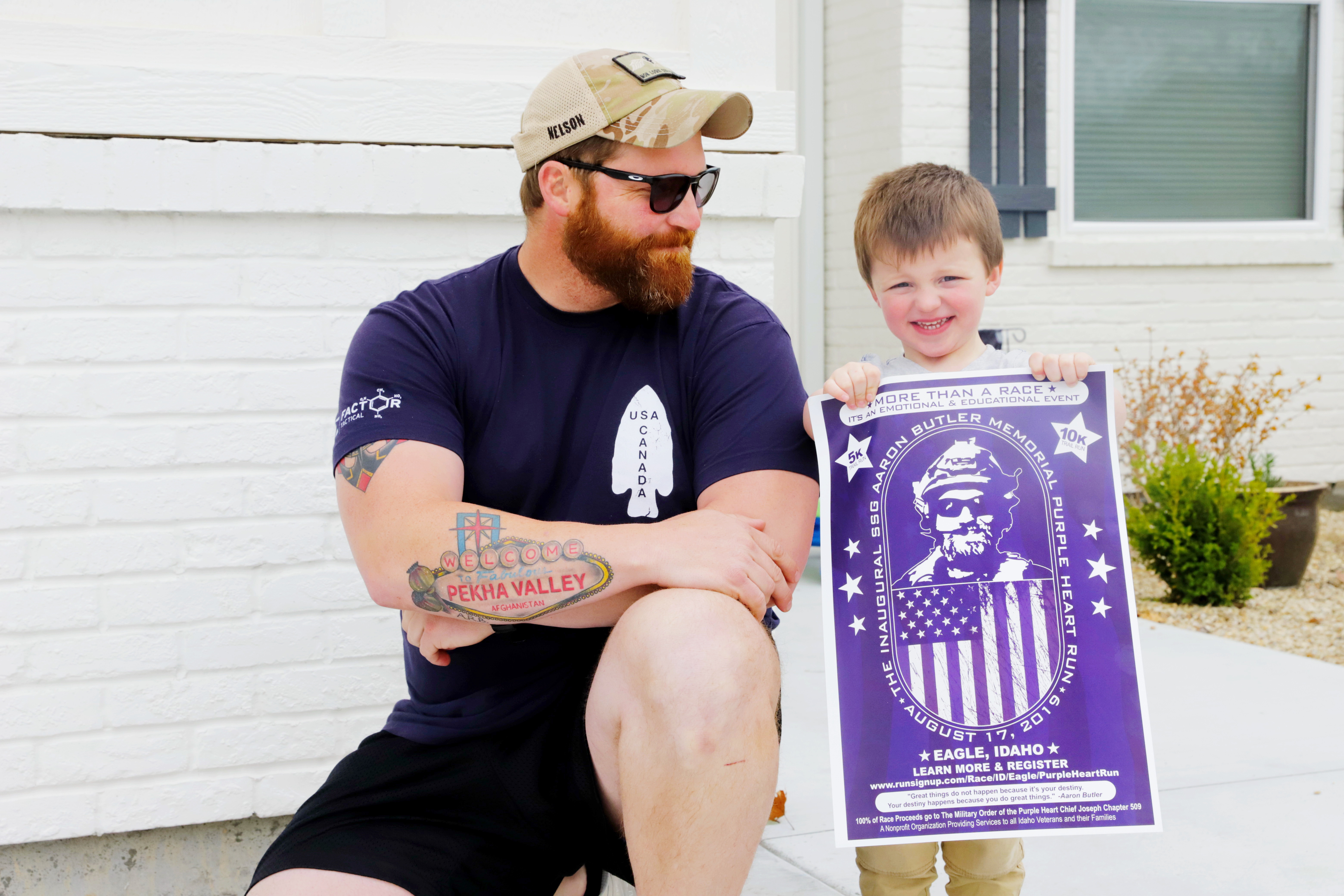 Unflappable, aggressive and fearless, Staff Sgt. Aaron Butler died two years ago this August in Nangarhar Province, Afghanistan, from wounds he suffered when an improvised explosive device exploded in a building that he and his 12-member team entered during combat operations. He will be remembered with the first annual Aaron Butler Memorial Purple Heart Run, Aug. 17, Eagle Bike Park, Eagle.

“Aaron was the youngest member of our Special Forces Team. He thrived on the intensity and chaos of war,” observes Dan Nelson, his former detachment commander who co-founded this Purple Heart Run and serves as race director. “He was a fiercely determined, chronic over achiever who could have done anything with his life, but chose to serve his country.”

From the Military Order of the Purple Heart website is this description of the decoration:

“The Purple Heart Medal is awarded to members of the armed forces of the U.S. who are wounded by an instrument of war in the hands of the enemy and posthumously to the next of kin in the name of those who are killed in action or die of wounds received in action. It is specifically a combat decoration.”

Nelson and 11 soldiers were wounded in the blast that killed Aaron. He sustained multiple traumatic injuries and has many years of surgery and medical treatments ahead. Due to his injuries, he will be medically retired as of May. Drawing attention to himself through media interviews is never something he expected to do, but now he is taking the focus as spokesperson, because Aaron can’t tell his own story.

“I was responsible for Aaron, just because he is gone doesn’t mean I am no longer responsible,” states Nelson. “I am obligated to share his remarkable story so that he is not forgotten. He and his family are among many who share a tremendous burden of sacrifice.”

A native of Monticello, Utah, Aaron was a Special Forces soldier assigned to the Utah National Guard’s B Company, 1st Battalion, 19th Special Forces Group. He was a four time state high school wrestling champion, claiming titles in 2005 through 2008. He was an admired athlete, or, as Nelson says, the epitome of a warrior. In the military, he was known as a smart soldier who was willing to respectfully question leaders. “He was highly trained and always challenged me to give him legitimate answers,” remembers Nelson. “He wasn’t a mindless brute, but he could be brutal.”

Through race day events, Nelson and Muguira, seek to bridge misunderstandings between civilians and the warriors who fight for them. “At the event, it’s not that we want to be praised or thanked by the community, but we do want people to remember the outstanding women and men who have sacrificed it all for them,” comments Nelson.

The event is planned so that it is a happy celebration with somber moments. The program will include distinguished military and law enforcement speakers, bios and photos of service men and women who have passed away, refreshments and music. Gold Star Veterans and families from the global war on terror will be this year’s spotlight. 10K participants will run along Veterans Trail, which follows the perimeter of the Idaho State Veterans Cemetery. Some of Aaron’s family will be in attendance as will his team from Bravo Company, 1st Battalion, 19th Special Forces Group of the Utah National Guard.

Race proceeds will go to the Idaho Department and Chief Joseph Chapter 509 of the Military Order of the Purple Heart, which is a support organization for Idaho veterans and their families.

Nelson and his wife, Kacey, have two sons, Patrick and Leroy, who are both named after fallen soldiers. Leroy was born at Walter Reed National Military Medical Center while Nelson was a patient there. A 2001 graduate of Boise’s Centennial High School, Nelson graduated in 2007 from the University of California, Los Angeles, where he was team captain of the football squad.

He was commissioned in the US Army in 2007, was an infantry officer and served in the 82nd Airborne Division. He transitioned to the 19th Special Forces Group in 2011. His deployments included Iraq, Afghanistan, Philippines, the Levant, which is primarily western Asia, and North Africa.

At the height of the Iraq War, he committed to the US Army. It felt like a calling. His father was a Vietnam veteran and his mother an anti-war protestor. They attempted to steer him away from military service, but when he made the decision to join, they fully supported him. He was inspired to serve by, “every service member who served before me, particularly those whom I watched join, fight and sacrifice in Iraq and Afghanistan following the events of 9/11 which I became aware of from the comfort of my young civilian life,” says Nelson.

He urges parents to bring their children to the race to meet and hear from combat veterans, to begin to more deeply understand the cost of war. To sign up for the race, visit https://runsignup.com/Race/ID/Eagle/PurpleHeartRun