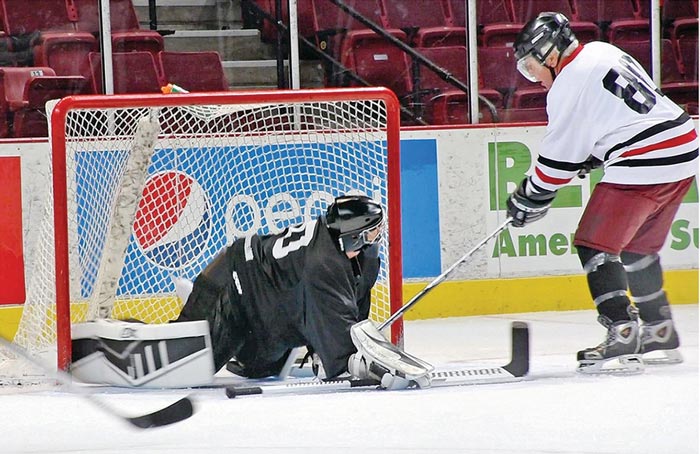 A smile crosses the rugged face of Eagle’s John MacMillan as he recalls a colorful on-ice incident that occurred during his rookie season with the 1960 Toronto Maple Leafs. Striving to crack the talent-laden Leaf roster, young “Johnny Mac” was playing on a line with veterans Bert Olmstead and Bob Pulford. The Leafs were facing the mighty Montreal Canadiens at Quebec’s legendary hockey arena“The Fabulous Forum.”

“I had skated Bert off-side and right away I’m thinking he’s going to chew me out right now,” MacMillan remembers. “I had my head down and was sort of coasting when I ran into Marcel Bonin.” Long-time hockey fans will recognize Bonin as the talented but tough Montreal forward who was noted for his tenacious off-season activity of wrestling bears.

“I had no idea, I just ran into him. He pushed me back, and he says: ‘You, the rookie,—next time.” The hard-nosed Montreal player had cut young MacMillan some slack on this occasion of accidental contact. “But I didn’t forget that!” John vividly recalls that 1960 encounter as if it were yesterday.

It’s just one of the entertaining recollections in a new documentary film covering John’s hockey journey and life in the golden “Original Six”era of the NHL. The film opens with twilight commuter traffic creating artistic waves of red tail-lights against the snow-dusted Boise foothills. Treasure Valley workers are heading home, but downtown in the spacious Century Link Arena things are just heating up.

The 5,000 seats are hauntingly vacant and a dominating silence hovers in the air, yet below the stands, things are stirring. It doesn’t matter that the arena is empty, for the players emerging from the locker rooms are no less passionate than the young pros who fly down the ice at a packed ECHL Idaho Steelheads’ game. This session of the St. Michael’s hockey club is a cherished weekly date
for the devoted.

Most are well over 40, but with some young mustangs among them, their backgrounds vary, including ex-college players, long-time “rink rats” from the various levels of hockey’s strata, some from hockey strongholds like Canada, Minnesota, and the Northeast, even a couple of ex-NHLers. They have found themselves in this high desert city united by their love of hockey—a passion that transcends age, extra pounds, and pulled muscles. Ken Wreggett, the former Pittsburgh Penguins’ goalie once said “Hockey is like a disease.” Nobody in the St. Michael’s group or the “Relics” hockey club wants to find a cure.

Among them, wearing number 80 or 90 is a classic-skating, disciplined, distinguished player patroling right wing. You always notice him. Former NHL pro “Johnny Mac,” as he is known to the Boise hockey community, is in his eighties. He defies age and even hip replcements to continue playing the game that has been the soundtrack of his life making nifty passes, setting up
teammates, still backchecking and taking regular shifts. 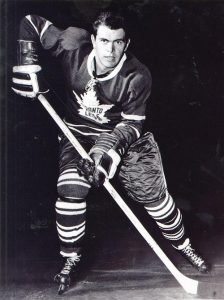 Johnny Mac has two Stanley Cup rings from his NHL years with the early1960s Toronto Maple Leafs, coached by the legendary Punch Imlach. In the 1961-62 team photo, John MacMillan
stands proudly with his Leaf teammates—10 of whom are enshrined in the Hockey Hall of Fame. That’s essentially over half the team. To crack that line-up in hockey’s highly competitive Original Sixera is no small accomplishment.

During his tenure with Detroit, MacMillan roomed with hockey icon Gordie Howe on team road trips. Decades later John is still lacing up the skates. Watching him today, it seems he’s as happy and focused on the ice in Boise as he was all those years ago skating at Toronto’s Maple Leaf Gardens.

As a youngster, John began his love affair with hockey on the cold outdoor rinks of northern Alberta. He progressed steadily, eventually captaining the Lethbridge Native Sons of the old Western Canadian Junior Hockey League—traditionally a direct feeder line into the NHL.

However, John decided to get a college degree and headed south to Denver University to play with the NCAA D.U. Pioneers. There he became an NCAA All-Star and team captain. During John’s stay the Pioneers captured 2 National NCAA college championships.

John has since been enshrined in Denver University’s Hockey Hall of Fame. He was among the initial wave of future pros, including Bill Hay, Red Berenson, and Lou Angotti that took the U.S. college route to the NHL. Johnny Mac graduated from D.U. with a degree in civil engineering.

Following a 5 year NHL tenure and stops along the way, John founded himself on the sunny beaches of Southern California skating with Willie O’Rea and the popular San Diego Gulls of the Western Hockey League, where he was again team captain. The NHL beckoned once more when the Oakland/San Francisco Seals 67/68 expansion franchise, initially coached by his old Leaf teammate Bert Olmstead, approached the Gulls with an offer to obtain him. He decided to turn it down, choosing to remain with San Diego to bookend his pro career..

Yet, it is in Idaho’s Treasure Valley that perhaps Johnny Mac has made his biggest impact—not only as a hockey player and mentor but as a beloved member of the community. Arriving in Boise in the early 1980s to launch a Computerland franchise (later renamed Intermountain Technology Group) with his brother Alister, John began coaching the city’s hockey team—the Boise Blades. Long before the days of the Steelheads and the Century Link Arena, the Blades played out of an old 500 seat facility off Ustick street while dueling neighboring teams like the Reno Broncos, Sun Valley Suns, Idaho Falls Bushwhackers, and Portland Royals.

Then in his early 50s, and sometimes as a playing coach, Johnny Mac would surprise his players by outskating them in practice while schooling them with hockey wisdom from his ample bag of tricks and lessons garnered over a pro career. The pattern continued during the 1990s and his ten-year stint as a full-time player with the traveling Boise Knights of the Intermountain Senior League, where he won a team MVP award while often competing against players decades younger.

He leads by example— his humble, yet quiet confident manner, approachability, genuine concern, and friendship won him the respect and love of the Treasure Valley hockey community. Some 30 years later, as Johnny Mac continues to play into his eighties, that respect remains and continues to grow.

Kelly McDonough, once a young player on the 1980s Blades, calls John“Our Tribal Elder,” a fitting title that implies so much more. McDonough recalls his first encounter with a new coach MacMillan: “I was in my 20s then and thought I was a hot-shot hockey player,” Kelly remembers, “we were doing drills and I was skating as hard as I could then this new guy Johnny Mac, then in his 50s, blitzes past me like I wasn’t even moving. I couldn’t keep up with him. That really impressed me, right there I thought ‘I’ll listen to this guy.”

Goaltender Tom Jones, a teammate of McDonough’s on the 1980s Blades, continues to play with Johnny Mac on the Boise hockey scene and holds MacMillan in utmost respect.

“Everybody looks up to Johnny,” Jones says, “he’s an inspiration to all the guys, everybody loves John and would bend over backward for him, I know that I would. As far as I’m concerned there’s nobody better than Johnny Mac. A class act all the way. He’s always in such a gracious state of mind. He is hockey a stalwart pillar in the hockey community.”

To those legions who have gone to the rink with Johnny Mac (now 85 years of age) over the decades and to those who skate with him today, he remains “The Tribal Elder.”

For his part, John MacMillan, whose looks and demeanor defy his age, going to the rink packs the same excitement it did as a youngster in northern Alberta. “Every time I go to play we have more laughs. Stories are told – I tell a lot of stories, but they get better, I can embellish them and nobody’s going to know the difference,” he chuckles.

“I just love to go out there and be with the group, make a decent pass, don’t make a bad pass, and don’t let anybody score on your line. I have a lot of fun with it and it keeps me young. I have my ritual that I go through every week and if I’m not going to the rink I feel out of step,” Johnny Mac says.

Over ten years ago John and his wife Jolene moved from Boise to Eagle. “When retirement was fast approaching we started looking at Eagle,” he recounts, “we were looking for a rural setting with
more space than we were in at that time. Someplace with lots of trees, a park-like setting, and quiet. We have certainly found that plus every day we enjoy nature: geese, ducks, owls, quail—you name it. Add to all that friendly people and great neighbors. Easy access to shopping —we love it here!”

On the occasion of John’s 80th birthday, Jolene threw a major party at their Eagle home to honor the milestone and 160 people showed up to celebrate the day with them. It is a testimony
to the love and esteem, Johnny Mac has in the Treasure Valley.

Watch the new documentary: “Hockey’s Johnny Mac: For the Love of Hockey” online at https://vimeo.com/499259704

Author note: Ed Guthero played hockey for the Boise Blades in the 1980s and Boise Knights throughout the 1990s. He is a graphic designer / art director, photographer, author, and filmmaker in Boise, Idaho.