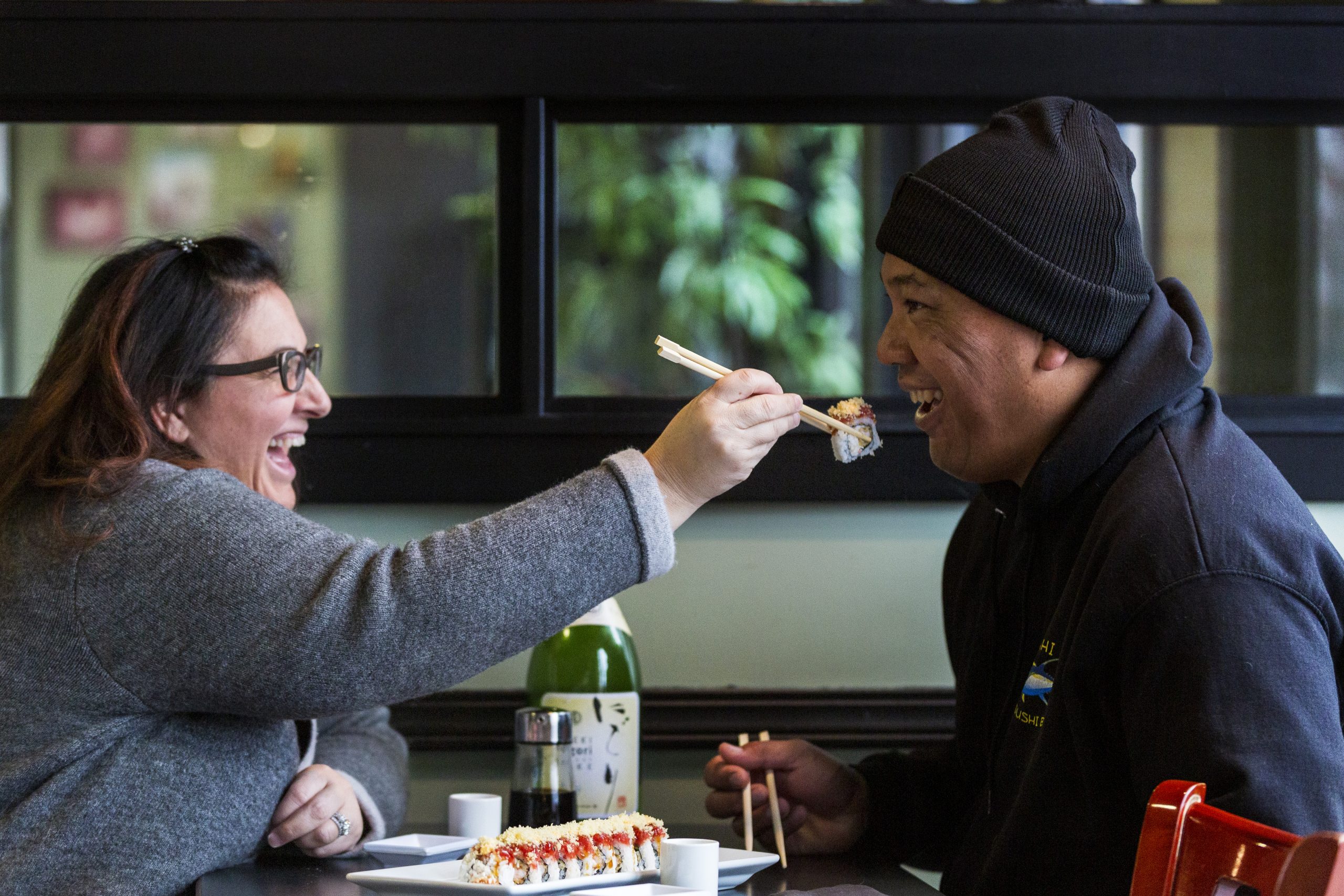 Stories of food, love and partnership

Three local couples reminisce with laughter as they reflect on life, first dates, how they met, and what they cook for each other. A stable relationship is a blessing and is to be cherished.


Do you cook for each other? CJ and Cassie do cook for each other; however, there is a clear difference between Cassie cooking to live and feeding a family quickly and efficiently, and CJ’s elaborate, decadent dinners that are elegantly plated for three enthusiastic children. Cassie decided long ago that if CJ decided to take over her cooking with extra spices or sauces and uncovered flames in the kitchen, it was well worth letting him take over…CJ can turn some simple dinner into something fantastic.

How did you meet? Cassie and CJ met in college. Cassie had just moved from Kenya, and her roommate took her to church, where CJ’s father happened to be the youth pastor. They went on one date, which Cassie describes as the “worst date ever,” and then didn’t see each other for the next seven years. In 2010 they ran into each other at Starbucks and ended up sitting over coffee for several hours, a much improved second date. Ten years later, they have three beautiful children and still make each other laugh.

In business together? Being in business together has challenges and rewards. We now have two open restaurants, Caci and Rembrandts, with more in the books and on the way. CJ thinks that being successful in business is not only about the partners that allow him to follow his dream, but it’s the daily sacrifice everyone, including the children, make at home too. Whether it’s late nights, early mornings, or long weekend shifts, he wouldn’t be able to do this work without the support of his wife and all that she does to take care of the home and family. CJ said that being a successful man in this business is directly related to having a successful relationship with his wife and his partnership with her. 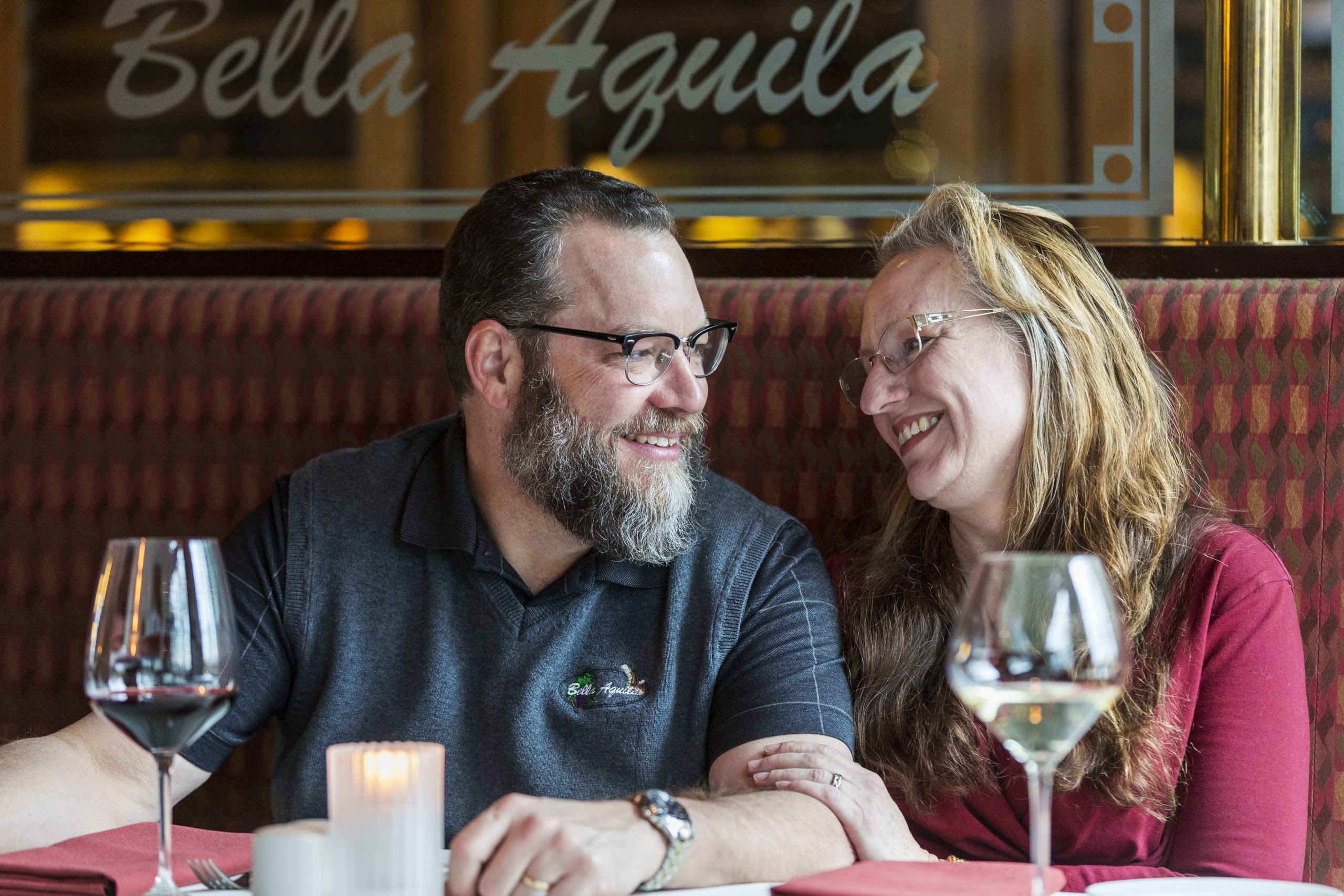 How did you meet? Chad and Amy worked for a camera store chain. Amy was offered a promotion to be the manager of the store, which she declined because she was still in college. Chad was managing a smaller store, so when Amy refused the promotion, she suggested that Chad was ready to handle the larger store. The truth is she thought he was cute and wanted to ask him out. The company had a No Dating policy, so as soon as they started dating, they reported the relationship, and Amy was transferred to a store closer to my house.

First dinner together? Amy took Chad to an Indian restaurant for their first date. She frequently took her first dates there, figuring if they could handle the spice, then they might be able to deal with her.

Do you cook for each other? Chad cooks, and Amy bakes. He prepares the meal, and she bakes the bread and also the dessert. Chad recently perfected one of her biscuit recipes, which she is flattered by, however, she like, “Hey, that’s my job!”

Do you cook for each other? Randy and Tawnie have cooking competitions when they are bored! Randy cooks Hawaiian and Asian foods, and Tawnie cooks more Italian style foods and baked goods.

How do you celebrate each other?  These two are “true foodies” at heart, and when they go out to have a good time, they usually go out exploring new eateries or head to one of the favorites on their go-to list! They tend to get adventurous when they travel — eating off the main path and finding the “hole in the wall” restaurants. They are the best kind.

How’d you meet? Tawnie was late for work and cut Randy off to get the last parking spot. She was running late for work, and she remembers him staring at her, like “Ummm…hello.” She motioned to her watch and mouthed, “Sorry, I’m late for work.” Little did she know, he worked at the same restaurant. When Tawnie went to apologize, he asked her out for a drink — and now five kids, four dogs and seven chickens later — it was meant to be.

First dinner together? Randy swept Tawnie off her feet with tacos and enchiladas from a drive-thru Mexican Restaurant, Roberto’s in San Diego, on 4th Avenue. Tawnie says the food is “the bomb.”