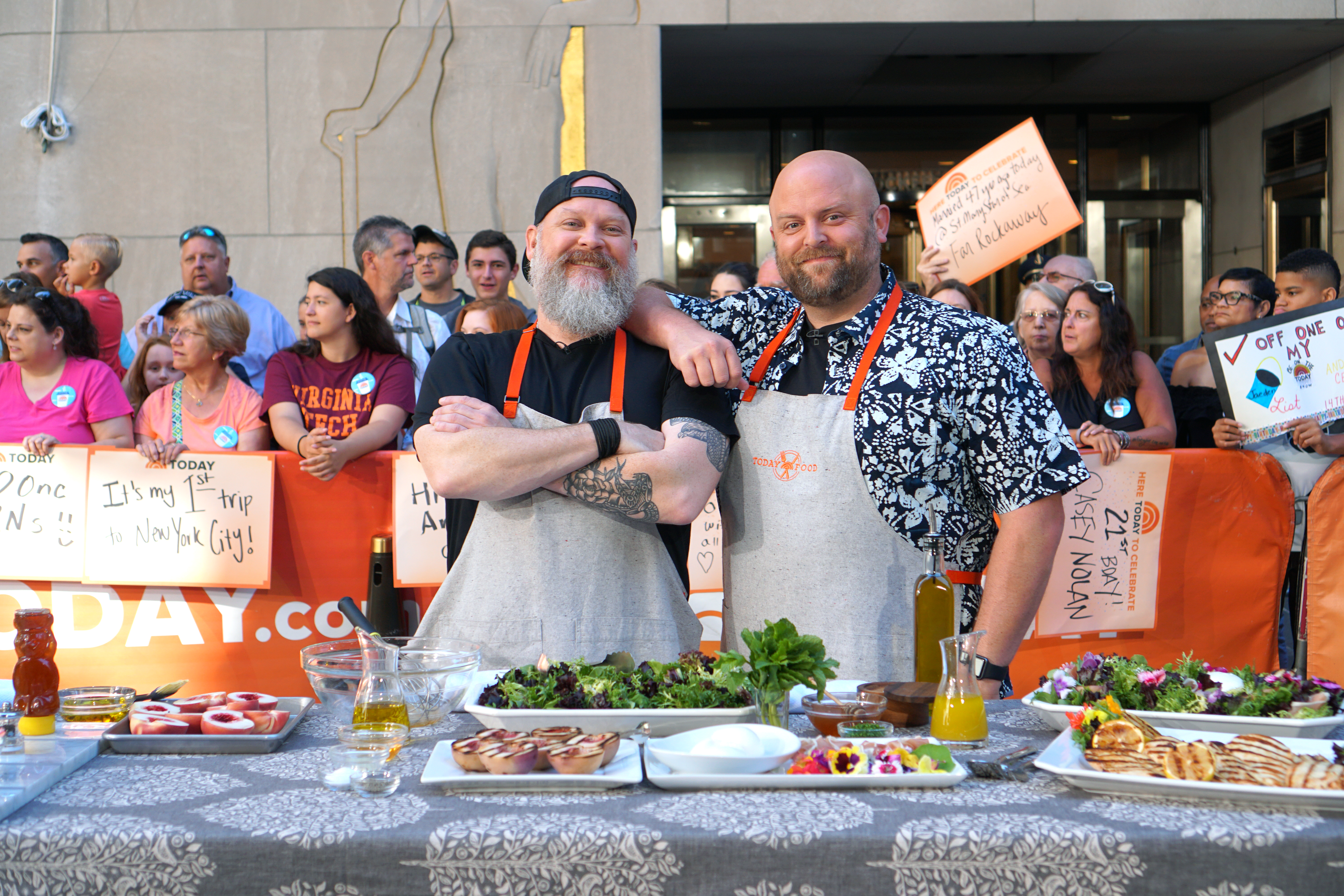 Not many people can rightfully claim to have eight, active grills on their patio, let alone television cameras and lights in a garage production studio, but not many people are as eclectic as Eagle resident Mark Anderson. The sarcastic half of the Food Network Grill Dads duo, the multi-talented Mark is just being himself.

How did Mark land on the Food Network, a lifestyle TV network? And, while we are wondering, how did east coaster Mark land in Idaho? The story is that he and his best friend of 20 years, Ryan Fey, who Mark says is the uninhibited, wacky half of the Grill Dads, worked together in the advertising industry before becoming the Grill Dads. They were passionate about cooking for dinner parties, baby showers and barbeques with friends sometimes hosting as many 60 people. They did this without formal chef training. From there they turned their talent for promoting their clients onto their own concept, and launched themselves as backyard grill warriors who banter while demonstrating all the wonderful foods one can create with a grill. They did this while busy in their careers and parenting their children.

After months of creative planning, they created a trailer and posted it on a crowd funding site.

“It was one of the most vulnerable moments of my life,” remembers Mark. “You put yourself out there. It would be embarrassing if the idea flopped.”

Their idea did not flop. Money and enthusiastic encouragement started pouring in. At the same time, they submitted their trailer to a producer of the Food Network’s Guy’s Big Project, a competition, reality TV series hosted by Guy Fieri, American restaurateur and an Emmy Award winning television personality. They were selected as one of two winners, rewarded with a full 10 episode season of their own show The Grill Dads. Their second season on Food Network was called Comfort Food Tour. They were again able to take their love of cooking and food on the road, meeting outstanding chefs and eating delectable food as they went. The Grill Dads have also appeared nationally on NBC’s Today Show. Marketers talk about reach and frequency. The Grill Dads may have reached as many as 25 million people on the Today Show alone in addition to 24 episodes of TV in the last 14 months.

“I am a Food Network fan boy,” declares Mark. “Friday nights with the Food Network, that is how I learned to cook. The bantering with Fey while grilling is just who I am.”

Mark is from an upstate New York Italian family who cooked and frequented neighborhood family Italian restaurants, but he never dreamed that he would cook on TV.

He says he obsesses on a food type, reworking and cooking until he masters it. When it tastes better than a restaurant’s food, he knows he nailed it. For example he focused on biscuits for six months, before finally declaring his newly created recipe and technique the difference between good and great.

His advice to other wannabe TV personalities and travelogue hosts: “Just go for it. Don’t doubt yourself.”

Mark insists you can cook anything on a grill before revealing he cooks his entire Thanksgiving dinner on the grill. Or, in his case, it’s grills. He is also a whiz with a smoker. His wife, Sarah, notes that their backyard looks like a barbeque grill store.

“Our focus is celebrating food and being dads,” declares Mark who is 43 and, with Sarah, has a four-year-old son. “We are the new dads. No more ‘60s Don Draper of Mad Men dads. Nowadays dads contribute at home. We cook, go to soccer games and enjoy our families.”

Sarah has a quip that matches the fun of the Grill Dads: “Mark and Fey have been doing this show for twenty years, finally some cameras showed up.”

But to focus only on Grill Dads leaves out the other interesting things about Mark. After college he was a tour manager. He was an audio engineer for Maroon 5, a multi-hit, pop rock band lead by vocalist Adam Levine. He came with the band to Boise when they played at what later became The Knitting Factory. While here on tour, Mark hiked to Table Rock and floated the Boise River, never dreaming he would someday move to southwest Idaho. Mark also tour managed Jennifer Hudson and Courtney Love.

After a life on the road in the music industry, he became an advertising executive. Over the next year he moved between Atlanta, Los Angeles, where he started working and cooking with longtime friend Ryan Fey, and Portland, Oregon. When he and Sarah decided to put down roots rather than continue to state hop, they picked Idaho. He teases that he was glad that Portland was his most recent residence so he can claim to be an Oregon transplant without mentioning the gig in California, thereby not irritating California-weary Idahoans.

He and Sarah purchased an existing Meridian business, UltraClean, a water damage restoration company for residential and commercial properties. It is a tangible, hands on business that helps people at a traumatic time. They offer water, wind, fire and mold damage repairs. He runs the day-to-day business while Sarah focuses on the marketing as part of the freelance creative work she does from home.

Boise’s Ronald McDonald House charity invited Mark to serve on their board recently. He jumped at the chance to volunteer his time for this worldwide charity that helps families stay together when an out-of-town, seriously ill child is hospitalized.

He and Sarah were inspired to move to Southwest Idaho just for such opportunities. Mark points out, “Southwest Idaho is big enough to have all the comfortable city amenities, but small enough to allow people to build a real community through volunteer work.”

Mark will find out by summer if The Grill Dads will be offered another gig on the Food Network. In the meantime, he keeps grilling and building his fan base on social media.