From Their Roost in Eagle, Five Entrepreneurs Create an Idaho Brand

It all seems simple enough. Grind up some corn or other grain, add hot water, steep a while, let the resulting mash ferment for a bit, and distill the nectar. Got it! Then comes your first sip, and whoa, that’s bitter! Let’s start over. Assuming you didn’t blow yourself up in the process (or get arrested for bootlegging!), the back-up plan is to simply go to an Idaho State Liquor Store where you can select from dozens of brands of whiskey from all parts of the world.

Whiskey is hot right now, following a trajectory not unlike the wine boom that started in the 1970s. The swelling interest in premium whiskey has created a surge in the establishment of small producers called micro or craft distillers. At last count, there are 45 states hosting these pioneers, and Idaho is becoming a prominent entry on that list. Enter 8 Feathers, an Idaho brand that hit the shelves this year while making retail history. 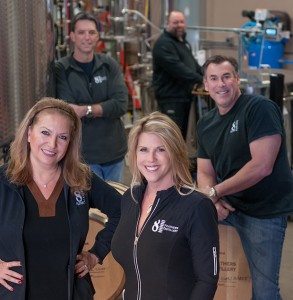 The United States has a long and often entertaining relationship with alcohol, having witnessed various temperance movements and outright prohibition during its history. To this day many states continue to hold a pretty tight grip on the regulation of alcohol’s distribution and sale, and Idaho has been one of the more deliberate in terms of letting out the rope. Only in recent years have Idahoans been able to buy distilled spirits on Sundays, and sales of packaged liquor remains a function of government-run stores. So when the founders of 8 Feathers developed a business model that included a tasting room at the location of the distillery, eyebrows were raised and heads shook in doubt. It’s an interesting and inspiring tale.

But first a little background. Having met each other by way of working together at a Texas telecommunications company, Greg and Marjie Lowe, Larry and Sandee Price, and Rick McKinney caught the whiskey bug and recognized right away that the five of them forged a complimentary menu of skills that together could form a strong partnership if they wanted to make and market their own distilled spirits.

Having moved to Eagle for work-related reasons, the quintet found employment in Idaho to be a mixed bag. Greg is a technologist; Rick an engineer, and Larry is a sales and marketing executive, all with a local telecommunications company, so their employment was secure. Marjie had been an event planner catering to the needs of several Fortune 100 companies during her career, while Sandee had been an expert in shopper marketing, a brand developer, and designer. Neither Marjie nor Sandee immediately found satisfying jobs, and they decided it was time to transition to something else. As these entrepreneurs hammered out the details of their distillery plans, it was quickly obvious that the two women would form the strongest two spokes in the wheel that would become 8 Feathers.

Their business plan is a model of well thought out and comprehensive preparation. From the outset, they’ve developed a long range direction. While establishing a location, assembling the right equipment and developing a product list are fairly short term milestones, the name 8 Feathers hints at the more extended outlook the group has employed. “Picking the word ‘feathers’ was easy,” explains Sandee. “We moved to Eagle and wanted to have a reference to the bird that our city honors. Also, we felt that eventually we wanted to go international with the product. The number eight is highly valued in Chinese culture and is associated with wealth and prosperity. We envision our bottle on the shelf of a bar in China as being an obvious ‘go to’ for the patrons there.”

Greg has spent significant time traveling in China and brings an understanding of commerce there and a perspective on the tastes and habits of this enormous potential market. Such is the reverence for the numeral 8 that in 2003 Chinese air carrier Sichuan Airlines paid $280,000 for a telephone number with all digits being eights.

The previously mentioned tasting room is another element that makes their planning stand out. Whether it was chutzpah or naiveté on the part of newly-transplanted Idahoans, the idea of a tasting room for distilled spirits was bold. Some initial consultation with a prominent law firm was encouraging, and they committed to working with the attorney to draft legislation and present it to the 2014 Idaho Legislature.

The fact that Sandee and Marjie are the two full-time staff for the company meant that they would spearhead the lobbying effort. That worked well, as it was felt that having women pitch the bill would soften the otherwise steely perceptions associated with liquor. “We spent every day for three months telling our story to just about every Senator and House member in the legislature,” says Marjie. “We found two legislators that were willing to work with us to sponsor the bill and get it up for consideration.”

The obstacles included determining how large the sample size could be, how many samples could be offered and the limits of where that could take place. “In the end we were amazed at how anticlimactic the vote was. We attended every session and when it came time for the vote, a vast majority of members agreed and it passed without fanfare. It really came down to being a matter of fairness for most of the legislators. If the wineries could sample their products, why shouldn’t a distillery be able to as well?”

On July 1, 2014 the law went into effect and 8 Feathers was ready. They offer tours at their production site where they give patrons a glimpse into the process of making whiskey and what distinguishes 8 Feathers from others.

Fundamental to making whiskey is iron-free water, and Boise delivers on that requirement by way of their artesian wells. The grains come from Idaho farms, and the fermentation and distillation occur right here. “It was our goal to make this an Idaho product”, declares Larry. “We’re proud of being able to say that it’s local from grain to glass.”

The tour concludes in the tasting room where visitors can sample the current offerings, Idaho Moonshine and Idaho Corn Whiskey. Bourbon, a product that can only be made in the United States, is in the barrel at this point and will be available when the aging process is complete. All the products carry the signature flavors and qualities that are coaxed from the raw ingredients by Rick and Greg. Greg, in fact, brings a heritage for Bourbon, having grown up in Kentucky. “It’s in my veins, I guess.” muses Greg.

The tasting room itself is comfortable and nicely appointed and ready for more than serving whiskey samples. Having coordinated events for such wealthy luminaries as Warren Buffett, Marjie has the experience to put together first rate events. “We are permitted for groups up to 15 people the way the room is configured currently,” she explains. “For small corporate or private gatherings, we would make the perfect venue for those wanting something different from the usual ballroom style event”.

So far 8 Feathers has found its way into many of Idaho’s restaurants and bars. And of course you’ll find it on the shelves of the larger Idaho State Liquor Stores where it shares space with the dozens of time-honored brands from large distillers with names conjuring up images of old barrels, deceased relatives, revered statesmen, heavenly hosts, and humble turkeys. Fitting, indeed, is the idea that eagle feathers now join that list.

Visit 8 Feathers at their location at 272 N. Maple Grove in Boise. Call for hours and other information at 208-968-9988. Their website gives profiles of the partners, describes the products, offers recipes and tells about classes in whiskey making available on site: www.8feathers.com