“One of the masterminds of a water agreement that holds Idaho together in the face of great change guides the reader through the conflicts, the politics and the players of Swan Falls. No one played a greater role, as attorney general, water attorney and finally as Supreme Court Justice to ensure Idaho kept control of its destiny. He tells the story in a compelling narrative students, attorneys and historians will enjoy.”
Rocky Barker, Idaho Statesman energy/environmental reporter Author of Scorched Earth: How the Fires of Yellowstone Changed America

“A Little Dam Problem reads much like the old wild west stories about fights between land barons who tried to corral all of the available water and keep it out of the hands of homesteaders. Jim Jones documents the highly contentious Swan Falls water rights fight between Idaho Power Company and the State of Idaho over control of the Snake River. The culmination of this struggle set the stage for the future allocation and management of Idaho’s life blood—Snake River water.”
Bruce Newcomb, former Speaker of the Idaho House of Representatives. 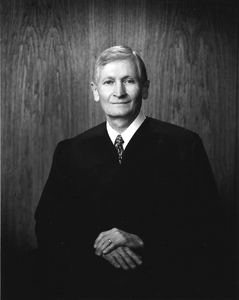 Justice Jim Jones is an Idaho native, who grew up on his family’s farm in Eden. He attended his first year of college at Idaho State University in Pocatello (1960-61), transferring to the University of Oregon in Eugene, where he received a Bachelor of Arts Degree in Political Science in 1964. He attended Northwestern University School of Law in Chicago, receiving a Juris Doctor Degree in 1967.

Justice Jones served as an artillery officer in the U.S. Army, including a 13-month tour in Vietnam. He was honorably discharged as a captain in August, 1969. In addition to a number of combat decorations, Justice Jones received an Army Commendation Medal for his civic action work with an orphanage run by the Cao Dai Church in Tay Ninh Province, Vietnam.

Justice Jones served as legislative assistant to former U.S. Senator Len B. Jordan for three years, commencing in 1970. He started a law practice in Jerome in 1973 and maintained it until he was elected as Idaho Attorney General in 1982. Justice Jones served two elected terms as Attorney General. Following the completion of his second term, he established a private law practice in Boise, which he maintained until being elected to the Idaho Supreme Court in 2004. He was re-elected in 2010. Justice Jones has served as a member of the board of Magic Valley Rehabilitation Services in Twin Falls (1975-1978), the advisory committee for KBSU Radio (1995-2000), the Idaho Vietnam Veterans Leadership Program (1983-1986), chairman of the Special Committee on Governmental Ethics, Lobbying and Political Campaign Financing (1987), chairman of the Attorney Generals Advisory Committee on Gasoline Pricing (1999), General Counsel of the Better Business Bureau Inc., Serving Southwest Idaho and Eastern Oregon (1995-2004), and Army Reserve Ambassador for Idaho (2002-2003). He received the Torch of Liberty Award from the Anti-Defamation League of Bnai Brith in 1987 and the Idaho Water Statesman of 1990 Award from the Idaho Water Users Association. During his tenure as Idaho Attorney General, he argued three cases before the United States Supreme Court.

Justice Jones is married to Boise author, Kelly Jones. They have three children, Kathy, Jon, and Kristi, as well as seven grandchildren.