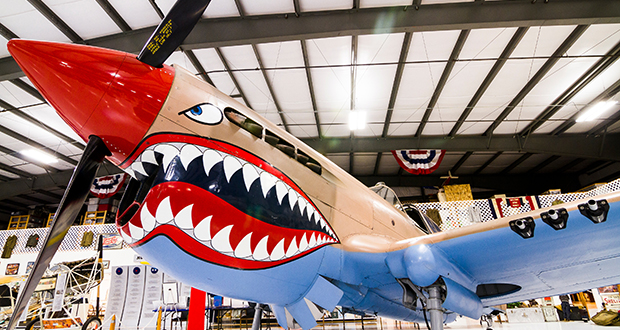 Full of vintage airplanes, equipment, and soldiers’ stories, the museum keeps growing and creating connections in the Veterans’ community. An exciting year ahead: the museum will honor the 50th Anniversary of the Vietnam War, and its veterans, hosting 6 free symposiums from March through August 2015. 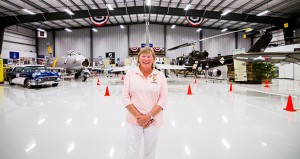 The ejection seat riveted us as children. Based on Wile E. Coyote and the Road Runner’s hilarious escapades, it seemed an exciting option to us, and we peppered our father—who was an Air Force pilot in the Korean War—with questions. When I recently visited the Warhawk Air Museum in Nampa, I remembered our old fascination. Sitting on the floor in the Korean War section is an ejection seat. You can crouch down and examine its precisely engineered structure, and read detailed information about the seat’s evolution. Only one pilot in four survived its use in the Korean War, I learned.

That’s one of the museum’s strengths, among many; it’s a tactile place. I caught myself leaning against a Huey Helicopter, and lightly gripping the steering wheel of a restored jeep. It’s possible to brush your fingers against some of the 11 vintage airplanes like the Fokker DR-1 of WWI—the Red Baron’s plane—or the supersonic F-104 Starfighter.

It’s also a big space, large enough to have a unique experience each time you go. My first visit in early fall was guided by Sue Paul, the museum’s director. I stopped by to understand how the museum had developed over the last 25 years. Sue explained to me the layout—the first half is devoted to WWII while the second to the Cold War era, linked by the ominous Berlin Wall. On my second visit, I meandered through the museum alone, easily spending an hour absorbed in the fascinating displays.

Twenty-five years ago, Sue and John Paul began the museum in Caldwell to display the beautiful and rare WWII Curtiss P-40s that John restored. Then, Sue told me, the donations began: a box of uniforms, a stack of military radios from an attic, a collection of photos—each contribution needing a place for display and preservation. As their vision for the museum expanded, the Caldwell location ultimately ran out of room. Ten years ago, the Paul’s moved the museum to its current spot at the Nampa airport, upgrading to a new, 40,000 square foot showroom.

The museum, a 501(c)(3) nonprofit, plays an essential role in the community by educating visitors about the conflicts that have helped define modern history. Sue says, “The role of the museum is to preserve the American experience in periods of time that changed our lives forever.” The museum captures the atmosphere of WWII, Korea, and Vietnam. As we spoke, singers from the 1940s crooned, occasionally interrupted by the recorded drone of a WWII airplane, while a separate sound system in the Cold War wing played music of the 50’s and 60’s. Sue told me the museum has worked hard to expand its Cold War displays to better cover the Korean and Vietnam Wars, and eventually hopes to add the Middle Eastern conflicts.

Not only does the Warhawk Air Museum educate visitors about our national history, it also holds many precious local donations. Uniforms, photos, medals, gear, all from veterans in the Treasure Valley, are each meticulously displayed. In easy reach for any visitor are the written narratives of local veterans describing their battle experiences. Many schools now make annual field trips to the museum, and the wealth of information makes it a wonderful place to leisurely research.

One of the museum’s most significant outreach projects is the Veterans History Project, a national program funded by the Library of Congress. Veterans from 20th and 21st century wars or conflicts are invited to relate their experiences on film; their stories are then stored in the US Library of Congress. The museum has a soundproof room where the recording takes place. Sue told me she does a lot of the interviews, and that it’s her favorite thing to do at the museum. Thus far, the museum has recorded 900 veterans’ experiences.

Increasingly, the museum has become a hub of connection. Beginning in 2002, the museum hosts on the first Tuesday of each month a coffee hour for veterans, the “Kilroy Coffee Klatch,” where over one hundred veterans from various conflicts mingle and enjoy each other’s company.

My father passed away this last summer. Though he had visited the Warhawk Air Museum, and he was not aware of the Veterans History Project opportunity, I think he would have loved it. The museum’s warm and inviting reception of veterans would have loosened his tightly held memories to benefit us all. All veterans should take advantage of the museum’s Veterans History Project, and the camaraderie they can gain in meeting their fellow brothers and sisters in arms. The rest of us will benefit from its richly historical, colorful, and personal displays.

For more information about upcoming events and the 2015 Vietnam War symposia, visit www.warhawkairmuseum.org.