The Persistence of Nellie 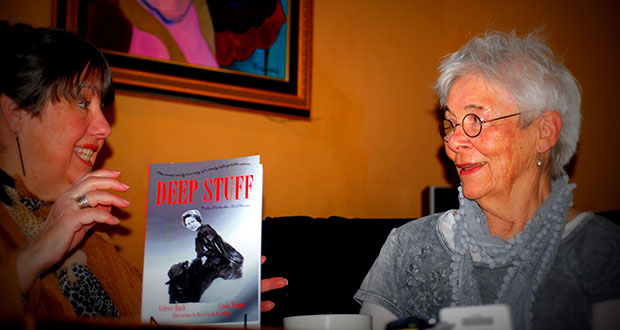 Seven years ago, the Dry Creek Historical Society hosted a gathering for residents and former residents of Dry Creek Valley. This picturesque little valley lies below Stack Rock between Bogus Basin Road and Highway 55. Since the 1800’s, this valley has been a thriving community where folks took advantage of the Homestead Act, panned for gold and silver, and raised livestock.

The response to the gathering held by the historical society was overwhelming. Instead of the ten or twenty people expected, the room was filled to the point of overflow with the voices of over sixty people joyfully reminiscing with former neighbors. One names that came up again and again in conversation was Nellie MacPherson. One or two attendees shyly reported that she ran around nude, and others commented on the plethora of children Nellie and her husband, Angus, always had in tow.

Two Dry Creek Historical Society members, Celeste Rush and Linda Winer, were fascinated by the idea of finding out more about Nellie. Celeste, a longtime resident of the Dry Creek Valley, had heard many Nellie stories told by her neighbors and friends.

A few months after the gathering, Celeste was at the Earl Ourada ranch for one of their yearly celebrations when she met Dave McArthur, now a Californian, who coincidentally happened to be one of the children raised by Nellie and Angus. Dave was enthusiastic about answering questions about Nellie and addressing the rumors and stories.

Over the course of five years and over 700 emails from Dave and others, Linda and Celeste discovered more about Nellie and her life story than they ever dreamed. Their original plan was to write a profile of a colorful former local resident, but as letters surfaced and more family members contributed information, the women were forced to admit that they had enough material for a book.

Dave lived with the MacPherson’s for thirteen years, and during that time Nellie had repeatedly told him her stories and shown him pictures of her early life as the nanny for a Senator and his children. Her experiences in Washington D.C., New York, and Europe in the 1920’s were as captivating as fairy tales to Dave. Nellie saved letters from good friends of hers, Tallulah Bankhead, the American actress, and Swedish feminist writer, Ester Blenda Nordstrom.

Dave and his wife Nelda came to Idaho several times, and took authors Celeste and Linda to the site of the old Toll Gate Station beneath Stack Rock, where Dave grew up. Dave brought a small suitcase of Nellie’s which held, among other things, letters from Ester Blenda and a few of Nellie’s favorite books.

Earl Ourada’s mother, Gladys, was one of the few people that Nellie kept in touch with after she left the area in 1960. Earl was generous in loaning the letters to the coauthors for research into Nellie’s later life.

The resulting book, Deep Stuff, was written from Nellie’s perspective and not from those who knew her. Nellie would never have said the things about herself that were observed by others, so her attitude was recreated as best as possible. Her enormous self-confidence not only allowed her to endure the wildness of the 1920’s, but also to survive a life of near destitution in the Boise foothills.

Deep Stuff is the result of Nellie McArthur McPherson’s powerful personality combined with the persistence of two authors with the goal of bringing mere sensational comments into a full-bodied story about an unforgettable, yet relatively unknown woman.

Deep Stuff was published July 2013.
Copies of the book can be purchased from the authors: lynwiner@gmail.com or crush@ctcweb.net. The book is $18.00, which includes tax. If you would like it mailed to you, the cost will be $21.
All profits for the sale of the books go to the Dry Creek Historical Society for the management of the Schick/Ostolasa Farmstead Historic Site.
The authors are looking forward to speaking to groups about the process of writing their book.