Quilting on the Grid 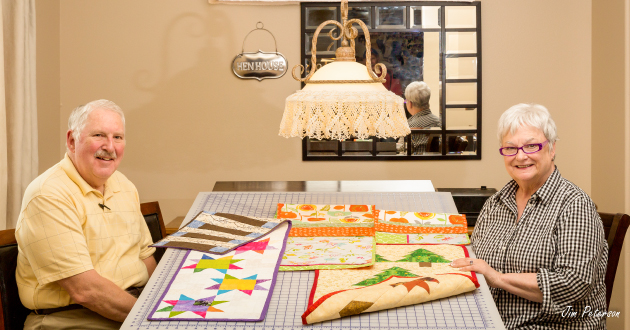 Several years ago, Mary Grover imagined a product that would make the art of quilting easier, cheaper, and accessible to so many women who longed to do it. And unlike most people who dream up a new invention, she actually created a prototype, endured the long, grueling process of getting it patented, and then had it manufactured. The result is a growing business her and her husband run out of their Meridian home called Quilting on the Grid.

Mary had always wanted to quilt and throughout her life kept saying “someday”. When she retired and thought the time had finally come, she found she had no patience for all the intricacies involved. She also worried about the expense of purchasing a longarm machine or paying someone to do that part for her.

“It was then that she put her creative mind to work,” said Mary’s husband, Warren. “Either that or my bulldog spirit,” replied Mary with a laugh. “Maybe both.”

Mary’s creation is called Mary’s Sew Genius™ Batting/Foundation, which is batting pre-sewn with a one-inch grid. The grid allows you to sew your fabric blocks together and quilt them at the same time.

Mary is quick to demonstrate the technique to anyone interested, in her cozy sewing room. She uses a very thin line of clear glue to attach strips of fabric to the front and back sides of the batting, along the same grid line. She then sews along the grid line and just like that, both strips are attached to the batting. You continue along the length of the batting until your quilt is done, completing both sides at once. Not only does this method speed things up considerably, but you can easily produce a reversible quilt, each side having its own unique pattern, design, and colors.

Quilting on the Grid offers project kits containing a pattern and the special batting needed to make it. This method isn’t meant to create big, bed-sized quilts; instead Mary designs patterns that are easy for beginners, such as small, hanging quilts, placemats, table runners, and purses.

“Many women confess that they have started, but never finished, a quilt because of lack of time,” said Mary. “Our products are smaller and designed for everyday use and give people a creative escape in a fun, fast, and fabulous way!”

In addition to offering project kits  on the Quilting on the Grid website, the Grovers travel to quilt and sewing shows across the country demonstrating the product and technique. Mary teaches at many of the shows, which has become wildly popular.

“After Mary finishes a teaching session, I’m bombarded at the booth,” said Warren. “We’ve been told this product is going to make Boise famous.”

“I’ve also been told by a rocket scientist that I’m a genius!” added Mary with a playful laugh. That’s where the name Mary’s Sew Genius™ Batting/Foundation came from.

Nationally, a few distributors, such as Nancy’s Notions, carry the quilting kits, and recently a distributor in Australia picked it up. The Grovers are also talking to a few big box stores. Mary and Warren are excited to see what the future holds for their business that began just two years ago.

“I feel like I’ve been blessed with this idea,” said Mary. “And we love sharing it with people.”