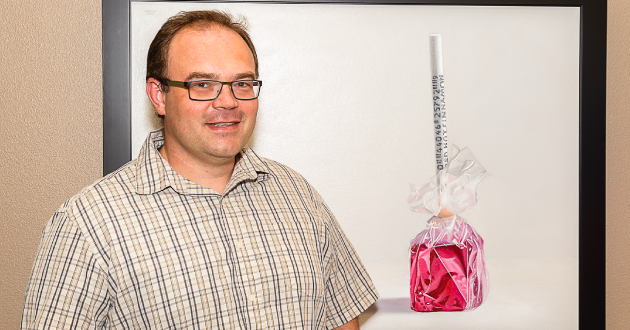 From a single lipstick container or wrapped candy to a multi-image depiction of trucks, toy soldiers, and UFO’s in action, his artwork often evokes a sense of nostalgia or sentimentality. “When people look at that piece of work, they always smile,” Padlo says.

Padlo’s 15-year journey in fine art is reaching a multi-part milestone at the Eagle Art Gallery, 50 2nd St. N., where he is among a variety of Co-Op artists displaying varied pieces each month. Ray Gun Extravaganza, depicting many colorful toy space guns seemingly on the move, is slated to be among the seven to 10 paintings displayed from November through December. With help from an online crowd-funding campaign, they will even be available as a puzzle.

“With today’s always-on, electronics-inundated lifestyle, it’s fun to create non-digital connections with such a classic pastime like the jigsaw puzzle,” he says in a release. “This project also makes my rather grand scale work accessible to a wider audience in a fun, interactive way.” 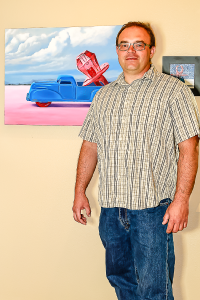 Padlo has certainly solved the puzzle of what to do with his artistic career. He attended the Academy of Art in San Francisco, worked for business graphics departments, and continued to study and practice fine art techniques. But he stopped painting at one point, lacking a subject about which he felt passionately.

One day in 2007, while working in graphic design, he looked at traditional toys around his studio and “experienced the spark,” he tells EM. Inspired, he painted an action-hero figurine, applying classic skills to a pop icon.

“What I didn’t expect to happen happened: people responded,” Padlo laughs. Friends encouraged him to paint more toys and to display his art. His first exhibit, in a downtown Boise coffee house in 2009, quickly garnered positive media coverage.

The 42-year-old’s sizable art portfolio includes depictions of toys and candy, robots, flying saucers and other unidentified flying objects, as well as still life—which in his world is much more likely to be a bright lipstick than a subtle apple. Even in shorter “daily” pieces, he sticks to classical fundamentals pertaining to things like creating illusion and color, always striving for a three-dimensional look.

As for Ray Gun Extravaganza, he spent about a year and a half thinking about how to use his toy space gun collection in a major work. He didn’t start the painting, however, until he and his family thought about a puzzle tie-in. In these toys, they saw the repetitive colors and challenge a puzzle needs.

Padlo grew up in the San Francisco area, moving to Idaho in 2005. He lives in Meridian and has a full-time job as a company’s photo manager. He aims to make his living solely as an artist someday.

“I feel like I’m at a stage where I’m proud of the quality of the work and proud of the craftsmanship. I work hard every day,” he says. He lists Edward Hopper and Rene Magritte as influences, both of whom would surely be proud of the comparison.