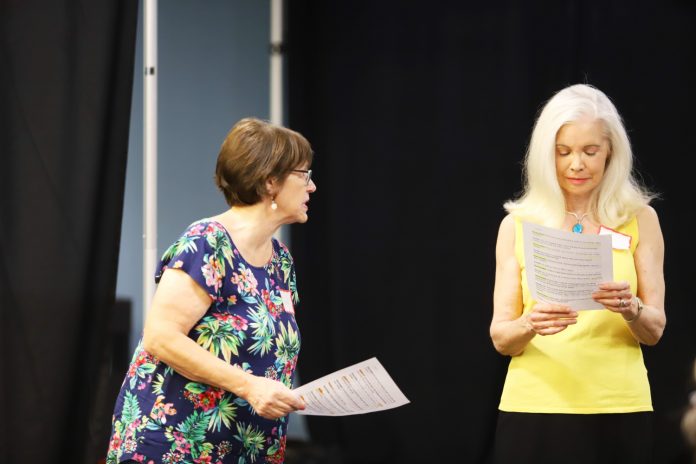 “I regard the theatre as the greatest of all art forms, the most immediate way in which a human being can share with another the sense of what it is to be a human being.”

As a life-long lover of theatre, it’s no small wonder that Deborah Hertzog became one of the co-founders—alongside Beth Bertulis and Vicki Walch, each equally passionate—of the Treasure Valley’s latest artistic endeavor: the Eagle Theatre Company (ETC). Together, through a grassroots effort, enthusiastic ETC board members are bringing the wonder of the stage to Eagle.

Eagle Theatre Company Board of Directors

“After over twenty years of living in Eagle, several members of the Board and I had watched the city grow and expand. Most of our board members have had their own experiences in community theater organizations all around the country and we had the idea that if other places could support a community theatre, then we were sure Eagle could too,” shared Deborah. “We knew the benefits that a theatre could bring to our community—whether on the stage or in the audience—and were optimistic that residents would agree.”

And right they were! After a pandemic-induced pause in early 2020, in September 2021 the five board members shared their vision for a community theatre at a Roundtable Discussion held at Eagle City Hall and received much interest and support. The group of board volunteers grew to eight and they set out to make their dreams a reality—to build a strong organization that included becoming a 501C3 nonprofit, launching a charter membership drive, and bringing live, quality theater to Eagle.

“One of our greatest successes has been finding a home at the Eagle Performing Arts Center (EPAC)! EPAC is a ballet school with one of the studios capable of being a Black Box Theatre.  I met with Director Liz Keller to discuss possibilities, attended their performance of Nutcracker that was performed in the Black Box, and soon we had found a home! Our three community gatherings have been held there and we’re very excited that our productions will be held in the EPAC Black Box Theatre.”

The group looks forward to their first production, coming to life in January 2023, featuring “An Evening of Two One-Acts.” One of the productions will also participate in the Idaho Association of Community Theatre’s state festival in February. In the meantime, stage preparations and fundraising are ETC’s primary goals.

Deborah would like to remind our readers, “There’s a place for everybody in community theatre! On-stage, backstage, or in the audience! We are excited to bring this opportunity to the Eagle community, in our own back yard!”

If you are interested in learning more about the Eagle Theatre Company or want to know how you can get involved, visit them online at eagletc.org. Keep an eye on their website for upcoming events, fundraising information, and volunteer opportunities!

Striving to Stand Out

Previous article
Striving to Stand Out
Next article
A Better Life: How Faith Brought Twin Sisters to Idaho