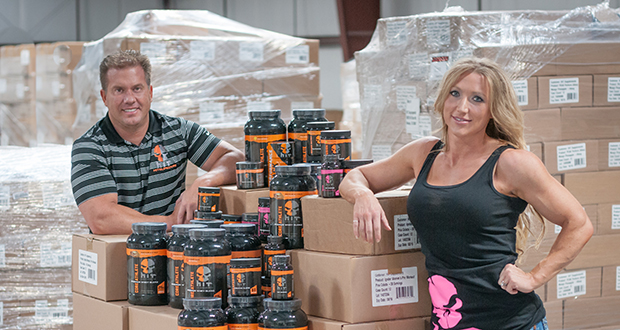 For Shawn and Rachel Fernandez, sharing a life wasn’t enough. They also shared a dream. Fueled by their passion for fitness and nutrition, the couple founded HIT Supplements in late 2012. In just two years the HIT brand, characterized by its skull logo and aggressive black and orange packaging, has grown from a Fernandez household dream into a supplement industry household name.

HIT has come a long way since the soft-launch of their first two products. It was a road marked with growing pains and difficult decisions, not the least of which was the decision for Shawn to quit his high-paying job and focus 100% on growing the HIT brand.  The safe play would have been to continue working, and grow HIT slowly. Shawn served as Vice President of Sales for a large Video Conferencing provider that he helped found and grow. Walking away from that financial security proved to be a blessing in the long run.

“It really was a ‘Burn the Ships’ type of situation for us”, remembers Shawn [citing Cortez on the shores of the Yucatan in 1519 when he ordered his men to burn the ships, eliminating their ability to retreat].

“We knew that to really succeed we had to be all in. It ended up being a huge motivating factor for us. We had no other option but to succeed.”

A good portion of their early success came with the launch of the first supplement line to target only women. HIT successfully launched its Women Only line that same year, and by doing so may have inadvertently created an entirely new market segment. Many other larger brands have since followed suit by also launching their own women’s line.

“In many ways it was the Women Only products that caught the interest of major international retailers,” shared Rachel Fernandez, Director of Product Development & Marketing.

“We were out ahead of the curve on that one, which is something we’re always shooting for in product development. Finding that next ingredient, or the next product that will help our customers achieve better results, faster. Our Women Only line is a great example of that.”

An athlete herself, Rachel played soccer at the College of Idaho, and never lost that competitive drive. She began training for figure competitions and fell in love with the sport.

In October, at the Northern Classic in Tacoma Washington, she took 1st place in her class (5’2” and under) and went on to win the Overall Figure title at the same event.

Originally offering just two products they now offer 28, with more slated for release in 2015.  Their focus is on quality, something an experienced athlete will pick up on right away just by glancing at a HIT label. For those of us who are more recreational in our workouts, it’s nice to know that there are companies like HIT who care just as much about the product they put in the container as they do about sales.

A good example of this is the HIT Core Athlete Protein. Core Athlete features 100% Grass-Fed and rBST-free Whey Protein, along with some pretty cool flavors like Waffles & Syrup, Carrot Cake, and Pumpkin Spice.  All the more reason they are ranked in the top 15% of brands on bodybuilding.com and continue to gain traction nationally and internationally with increased demand from large distributors like Europa Sports Products.

What began in the basement of the Fernandez home eventually grew into a small storage unit in Star, Idaho. They now occupy a brand new 10,000 square foot warehouse; however, if history is any indication, they may need to start looking for more space.