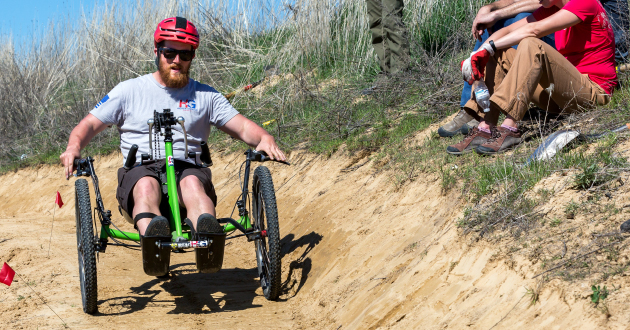 This time of year, outdoor enthusiasts of all ages flock to the impressive recreational opportunities at the Ada/Eagle Sports Complex. Located on Old Horseshoe Bend Road, just north of Floating Feather, it features a skateboard park, basketball hoops, a picnic area, a BMX course, and 29 different mountain biking trails. The latest project aims to make the bike park more accessible to all.

Volunteers gathered on April 2nd to build a 500-foot trail that is suitable for adaptive cyclists, trail users who ride hand cycles built for off-road use. With a hand bike, you pedal and steer with your hands; your stomach also helps steer, as it rests on a pad. Adaptive cycling especially appeals to those with physical limitations that make regular biking difficult or impossible. But few trails of this kind exist.

The trail came about when Eagle Park and Recreation Director Mike Aho saw an adaptive cyclist unable to get through a gate at the Ada/Eagle Bike Park. After speaking with the cyclist, he learned there are many setbacks to riding. Aho asked Steve Noyes, Trails Coordinator for the City of Eagle, to look at their trails. Noyes found a lot of trails on the Eagle side of the park could accommodate adaptive bikes, but they aren’t designated to do so.

Noyes created a network of people from various locations so they could begin sharing ideas around adaptive trail design. He was able to test these ideas with the new trail at the Ada/Eagle Bike Park. Noyes said he hopes their observations of how the trail holds up over time will guide the development of standards for these trail users nationwide.

“We are at the ground floor of this concept, and we’re really excited about it,” said Noyes. “We hope this trail brings people to Eagle to check it out.” Noyes also wants adaptive cyclists to pass feedback along to him. “I want them to tell me how the trail feels and what they think. No idea is a bad one.”

An adaptive cyclist came to Eagle from Ketchum on the day the trail was built to help volunteers test it. Noyes said he seemed pleased with the results. He and several of the volunteers were able to test out the adaptive bikes also. “I thought it was really a cool innovation,” said Noyes.

This trail fits perfectly with the prime mission of the Ada/Eagle Sports Complex—helping people to learn and love a life-long sport. “Eagle knows it’s important to our community to invest in things like hiking, running, and biking—things that provide recreation for a lifetime,” said Noyes. And the city of Eagle is always adding new things.

In October, a Skills Park was built for young and beginning bike riders. It has features like a teeter-totter and twisting ramps so people can get used to riding on obstacles. Noyes said this addition, right across from the skate park, has been a popular one.

For more information about the new adaptive trail or events happening at the Ada/Eagle Sports Complex, including the Bike Park, contact Steve Noyes at snoyes@cityofeagle.org or 208-489-8769.