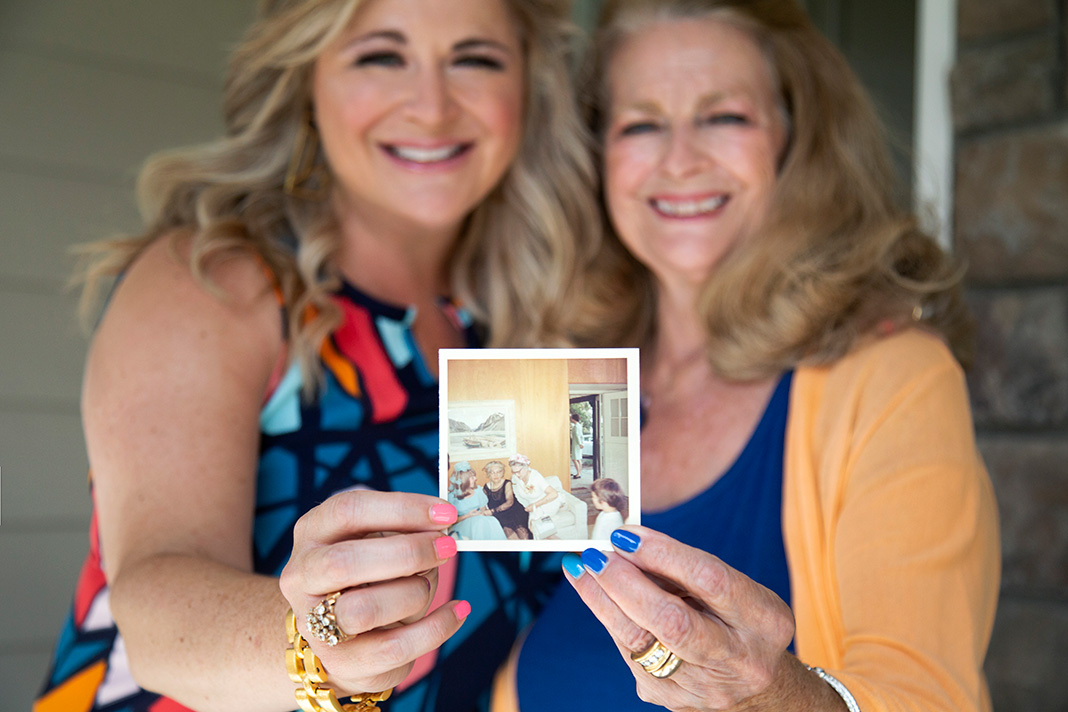 I have traveled to Boise from Northern Virginia frequently over the last 11 years, ever since my daughter Kristen Burris and her family moved here from the San Diego area.

About a month before my latest trip, I remembered that my great – aunt Nellie McArthur MacPherson had lived in Idaho with her husband Angus but I did not know where.  I searched the internet to see whether there was any mention of Nellie or Angus living in the Boise area.  The first article that popped up was a reference to Nellie in an Eagle Magazine article.  Nellie lived in the hills near Stack Rock, just a few miles from my daughter in Eagle!  That was the first coincidence linking Nellie and her great-great niece Kristen.

The second coincidence was that both Nellie and Kristen were featured in Eagle Magazine.  Nellie was the focus in a May 2014 article about her biography Deep Stuff written by local authors Celeste Rush and Linda Winer.   Kristen was featured in a June 2013 article focusing on her recognition as a “Top Doc” of Eagle, Business Woman of Eagle and Business Woman of the Year in Southern Idaho and her success as gifted and caring acupuncturist specializing in women’s fertility at Eagle Acupuncture, a clinic established by Kristen and her husband Tony.

Could there be more parallels between Nellie and Kristen who were born 82 years apart?  I don’t remember when I first heard about Nellie.  I suspect it was from stories my grandmother, Carrie MacArthur Dorius, told me when I was a child about her glamorous sister who left rural Utah to go to Washington, D.C. to care for the children of a U.S senator,  travelled to Europe as a chaperone for an uninhibited young American actress named Talullah Bankhead, and eventually moved to Idaho where she met a charming man who swept her off her feet and persuaded her to move to a homestead near Eagle.

Like Nellie, Kristen became very familiar with Washington, D.C.  She was born in our capital city. and spent her childhood and youth exploring that city and living in Northern Virginia.  One summer in high school, just like Nellie, she had a full-time job caring for the child of a member of the U.S. Congress.  Another similarity occurred in her freshman year in college when Kristen was assigned a triple room.  She and one of her roommates (who amazingly is now an environmental attorney in Boise) were very neat and organized (a necessity for sharing a triple).  The third roommate was a free and uninhibited spirit who was, well, not neat. However, she was very talented and went on to become a well-known actress – Jennifer Garner.

One of my cousins was one of the boys who spent summers with Nellie and Angus on the farm.   One summer, as his mother was driving the car up the mountain to drop him off for the summer, they rounded a bend and noticed Nellie working in the vegetable garden weeding, a pretty arduous task on the farm. What was not routine was that on this very hot summer day, Nellie was weeding in the nude.  How does this story connect with my daughter?  Nellie learned while traveling in Germany in the 1920’s that many people enjoyed nude sun-bathing, believing that the more exposure to the sun the healthier.  Being a practical woman living on an isolated farm, Nellie combined her farm work with her health routine.  Kristen is a dedicated and talented acupuncturist who has made it her life’s work improving and restoring the health of her patients through the use of Chinese medicine, acupuncture and herbs.  She often recommends that her patients expose some of their skin to sunshine for 20 minutes a day to help with vitamin D absorption, a vitamin most women in Idaho need to increase.

And how did Nellie and Kristen both end up in Idaho?  Both were looking for a better place to live and work. Nellie lived in Utah for a while after her adventures in Washington, D.C. and Europe but could not find satisfactory employment.  So, at the age of 40 she followed her father to his farm in Nampa, Idaho and eventually started working on a farm owned by her great uncle Rex Jensen near Boise. Although becoming a wife and mother was never part of her life plan, when she met Angus MacPherson a tall, handsome Scot who was a talented herdsman filled with humorous and exciting tales about life on the ranch and who loved to dance and sing, their mutual attraction lead to marriage and a move to Angus’ homestead close to Stack Rock near Eagle.  Kristen and Tony met in graduate school and married soon after graduation. But after several years of long commutes to their acupuncture clinic near San Diego, the high cost of living and running a business, gang violence, the birth of two sons and the recognition that the schools in their community did not meet their standards, and their desire to live in an area where they could enjoy easy access to soul-renewing mountains, lakes and rivers, they settled in Eagle.

There is another similarity between Nellie and Kristen – their love and dedication to their children. Nellie was in her 40’s and Angus was in his 50’s when they married so she never gave birth to any children.  But they created a caring home for many children they considered their own.  When Nellie’s sister-in-law had her 5th child and collapsed from post-partum depression, Nellie and Angus (who had only been married for 3 months) did not hesitate to take in the baby and a 2-year-old.  Their small home in the hills had no electricity and no running water, and they grew or hunted all their food.  But those children were their family for 12 years until their father could resume their care.  Each summer other nephews from Utah and California would turn up to help on the farm and explore the mountains and rivers until it was time to go back home for school.  Kristen and Tony are involved and loving parents to my grandsons Colton 11 and Jackson 13. It’s hard for me to keep up with their schedule of chores, studies, soccer practices and games, trips to McCall to hike and ski, and swimming and paddle boarding on the Boise River.  But like Nellie and Angus, Tony and Kristen are making certain their children are living full and adventurous childhoods they will never forget.

I spent some time with Nellie in the 1960’s when we both lived in California.  She attended my wedding in 1967 wearing an elegant black lace dress designed by Elsa Schiaparelli in 1923. She even wrote to the San Francisco Examiner to urge them to cover my wedding, in the “style of the London Times”!  If they had ever met, I’m sure she and Kristen would have had a lot to talk about.

Diane Dorius is a retired attorney living in Arlington, Virginia who enjoys visiting her daughters in Eagle and New Hampshire, performing in two modern dance groups, singing, and volunteering with several nonprofit organizations.