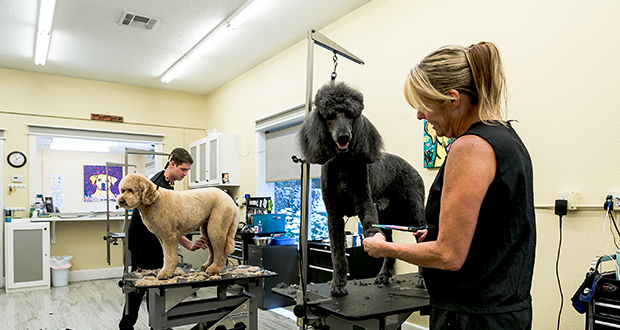 Though she was typically far more comfortable around furry creatures than speaking publicly in front of a large crowd, Carlson was determined. When asking the Eagle City Council to have those attending the meeting in support of The Spoiled Dog Salon & Resort stand, there was an audible gasp. Another community matter covered by the press was on the agenda, yet three-fourths stood.

The Mayor, a long-time Spoiled Dog client, stood, saying, “I guess that includes me.”

In 2008, Melinda, burned-out surgical tech of over twenty years, had a premature, “surprise” baby, and wanted to work from home. Having groomed her own dog, and having once been a hairdresser, she apprenticed with a Boise groomer while her husband turned their Eagle home’s older shop into the perfect facility. 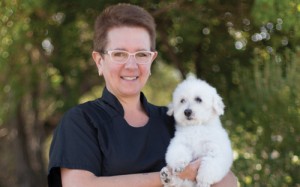 “My only plan was to do something different, and be available for my family,” says Carlson.

True to Carlson’s medical background, the shop was immaculate, and the grooming business grew rapidly. When customers asked if Carlson could recommend a place to board dogs, the emotionally-attached groomer with a nice, big yard kept pets overnight, until the yard filled with canines.

The need for quality Eagle boarding was evident, and the search for a new facility proved difficult, since Carlson’s business focused on grooming, not boarding. She wanted to stay central for the grooming side of things.

Finally finding a spot that worked was met with some resistance. A dog yard bordering an alley-way would “never” be in accordance with code, professionals told Carlson.

After putting the idea aside for twelve months, Carlson then picked it back up, this time minus representation. She called the leasing agent and wrote a letter to the owner.

“I wanted to meet and shake hands before I’d take a ‘no’,” she recalls, “I wanted them to know who I was, and what I was doing.”

When meeting face to face with the fire marshal, Carlson was told there was no problem with having a dog yard at the proposed location.

Loyal customers wrote letters to local decision-makers. On the night of the City Council meeting, Carlson’s constant, careful, and tender care of the animals paid off, with a crowd of clients supporting her cause.

“We opened with the bang,” said Carlson, “and recently opened a separate 2,800 square foot facility devoted solely to daycare for dogs, leaving the main facility for boarding and grooming.

As she watches her business top off, Carlson makes sure to give back, fostering for Boise Bully Breed Rescue and Idaho Humane Society’s IDAPI dogs that finish the programs but are not yet placed.

“We get them all groomed and pretty,” Carlson smiles, adding that one of her proudest moments came from the presentation of a simple little plaque from the Humane Society, honoring her for being a foster parent.

She says softly, “That just meant the world to me.”

Previous article
Life of a Surgeon
Next article
Listen Local