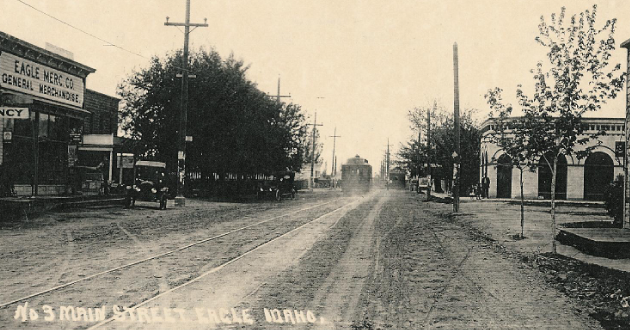 Eagle may be the only inland city in the West that began on an island. Eagle Island provided protection against Indian raiding parties as well as easy irrigation of crops. The construction of the Eagle Island Bridge and the interurban trolley were pivotal to Eagle’s economic development.

The completion of the continental railroad in the late 19th century gave a boost to the nation’s economy, as well as the local one in Boise when the Pacific Rail spur connected downtown Boise to larger national and international commercial networks in 1887.  The expansion of the Boise Interurban railway between 1891 and 1928 gave residents the ability to escape the core of the city and spread out all over the valley.

W.E. Pierce completed the B&I in 1907, which ran from Caldwell to Boise, via Middleton, Star, and Eagle. On August 7th of that year, a trolley line opened down Valley Road in Eagle and business grew.  The year before, a pharmacist, L. B. Harris, opened the Eagle Drug Store. The Eagle Drug Store was home to the bank for its first three years of operation. In 1910, the bank moved to the trolley line at the northwest corner of Valley Road and 1st Street, where Da Vinci’s stands today.

Eagle benefitted greatly from the interurban railway. Early in the trolley era, a self-sufficient agricultural township developed, with its own blacksmith, mercantile, drug store, bank, post office, volunteer fire department, and volunteer police department. The interurban railway connected consumers, markets, citizens, and producers to each other.  “The system was beneficial to Eagle because it provided an easy, convenient loading point for local farmers to get their products to market, and provided easy transportation for people going to Boise and Caldwell,” shares Barbara Perry Bauer, Historian with TAG Historical Research and Consulting.  “There were people who commuted to Boise or Caldwell for work on the system as it ran just about every hour between 6 A.M. and midnight.”

By 1915 the trolley connected Eagle to all the cities and towns in the valley via the Boise Valley Loop. Used by day tourists, commuters, and freight movers, the trolley stimulated growth of Eagle’s businesses. When the drug store moved into a new commercial block in 1916 on the trolley line of Valley Road, and expanded to include a soda fountain, it became a popular draw for trolley passengers.  Orville Jackson expanded the drug store into a general store of regional fame in the 1920’s.

In his 1914 book, History of Idaho, Hiram Taylor French wrote: “With the construction of the interurban line down the Boise valley a new era opened for all the intervening section. It was built solidly and had first-class car equipment and gave first-class service…The amount of interurban mileage was fifty-nine miles. The trolley system employed167. Estimated value, $2,000,000.”

An expert in Western U.S. history and the development of neighborhoods, Bauer wrote a book about the trolley system, Treasure Valley’s Electric Railway, and has been making presentations about the history for the last 15 years. “I have always been interested in the growth and development of Boise and the surrounding towns and was interested to learn how the electric railway system helped Boise and other towns develop during the early 20th century. In 2013, I was part of a team that renovated a historic trolley station and moved it to a spot near its original location near Broadway Avenue,” relates Bauer.  The team—consisting of artist Bryon Folwell, Bauer as historian, the City of Boise Department of Arts and History, Parks and Recreation Department, as well as the Southeast Boise Neighborhood Association—collaborated to create an interpretive exhibit about the station and related history.

Though Bauer is not an Eagle resident herself, what she likes most about Eagle is “the historic downtown area and the Eagle Museum of course!”  In 2014, Bauer received an American Association for State and Local History award for the work her firm did on the South Boise Trolley Station at Ivywild Park.  “I am also proud to have published a local history to my neighborhood in Boise called South Boise Scrapbook: A Neighborhood History in 2014.”

On August 11, 1924, the trolley provided transportation to bank robbers. After holding up the Bank of Eagle and stashing the money north of Star, Dora Douglas and Oliver Derby Jones took a streetcar home to Boise, bringing Dora’s 5 year old son Luther with them. For more on the story of Eagle’s Bonnie and Clyde, see the article by Pamela Kleibrink Thompson in the March/April 2014 issue of Eagle Magazine.

Trolley service ended in May 1928, replaced by a popular new mode of transportation–the automobile.

Bauer’s tips/advice for aspiring historians: “If in school take every opportunity to get an internship where one can get hands on experience working with archival or museum collections.  Volunteer with local historical societies or historic preservation groups and if out of college try to get a job with a federal or state agency to assure a reasonable salary.”