Have you ever found yourself pining for someone else’s lifestyle? It’s easy to become discontented when we are certain the grass is greener in our neighbor’s yard. Social media further distorts the biased lens through which we view the lives of our acquaintances. It would appear everyone else has well-behaved children, extravagant vacations, beautiful new homes, and continual achievements. To any outsider, it would appear Ernest Lombard’s grass is greener than most. The good news is, he wants everyone to enjoy the richness life has to offer and he’s written a book to serve as your guide.

Ernest J. Lombard FAIA, a distinguished architect and Idaho native, has lived a beyond extraordinary existence. If you’re unaware of the incredible impact Ernest has made in our community’s architectural landscape, look no further than the Morrison Center for Performing Arts, the iconic Wells Fargo building, or the Ada County Courthouse. When a man recently said to him, “I wish I had your life,” Ernest had the distinct realization most people unnecessarily confine themselves. It was true; he had lived a life full of adventure and distant lands. However, in contrast to what most people think, the lifestyle Ernest has built for himself is the product of nothing more than dedication and proper perspective.

Raised in Eastern Idaho, Ernest was expected to take over his family’s ranch. A college education wasn’t commonplace at the time, and financial support was in short supply. As a young boy, he took an interest in building design after exploring the pages of an Architectural Digest he found about the ranch. Fueled by his desire to explore the far-off places and structures of the magazine pages, he enrolled in architectural school in 1962 at Idaho State University. To pay for his schooling, Ernest began drafting for an engineering firm. The decision to work through college served him well as he was able to enter the workforce with five years of experience under his belt. As a result, he was quickly offered a position working for a well-known architect.

As his knowledge and skills grew, so too, did his desire to one day start his own firm. Ernest would occasionally doodle sketches of logo designs for the company he dreamed of owning. After his boss discovered the drawings, he was pulled aside to explain himself. He shared his yearning to chart his own course at some point in the future and was promptly obliged with the opportunity to do so. He remembers his boss stating with obvious irritation at his boyish whims, “well you can start today, you’re fired.” You could say the rest is history. Shortly after being let go, he and Joe Conrad established Lombard Conrad Architects in 1972. In speaking with Ernest, he would come to regard the incident as a great favor rather than a hindrance.

Ernest’s hope is to show others how to gain perspective on life’s challenges and build a memorable existence through experience. As such, he has recently published a book, titled Life-a-tecture: Build an Experience-Driven Life. His primary goal was to help people understand they are indeed the architects of their own life. There were countless times Ernest could have taken the path of least resistance or simply done what was expected of him. He chose instead, to build a life he could look back on with joy and pride, for the memories made and the positive influence his work had imparted. 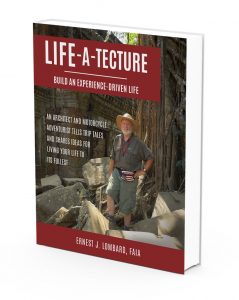 His book contains strikingly beautiful photos, captured around the world, by Ernest himself. You’ll discover as you read, Ernest has expertise beyond his architectural forte. Photographer, motorcyclist, world traveler, historian, and preservationist are all suitable titles. Each time I spoke with him to gather information for the article, we would find ourselves lost in conversation. Jana Kemp, his Project Manager, has spent years helping Ernest put words to the events that comprise his life adventures. Clearly I wasn’t the first person who wanted to pour a cup of coffee and stay for hours listening to his captivating stories. To immerse yourself in these same tales and learn more about Ernest’s impact on preserving Idaho’s history, his love for travel, and design, you can order a copy of his book on Amazon, on his website, or locally from the Aloha Bookstore in Eagle.

Books can be purchased at: