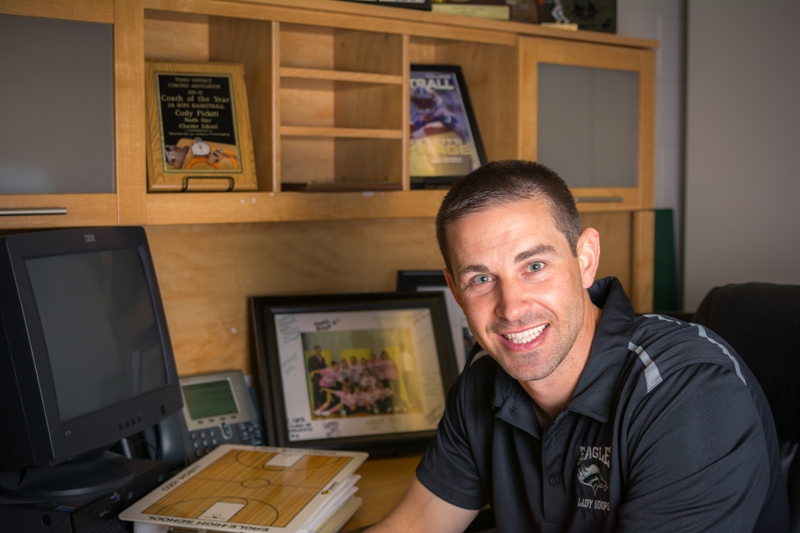 As former NFL quarterback Cody Pickett takes the reigns of the Mustang’s Lady Hoops, it seems that Eagle’s basketball fans will have something to cheer about

Changes are afoot for the Lady Hoops of Eagle High School this coming season. Coach Cody Pickett is picking up the reigns of this Mustangs team and, as fans attentions are turned to football, is plotting the course that will, hopefully, lead the team to victory at the A-1 State Championships this coming winter.

Pickett, who spends his days as a partner at the Treasure Valley’s Financial Insurance Group, is no stranger to the hoop dreams of high school athletes, or the hard work it takes to make those dreams a reality.

Pickett graduated from Caldwell High in 1999, where he lettered in football, basketball, golf and rodeo. From there, Pickett became a starting quarterback for the University of Washington’s beloved Huskies. At the end of his college career, Pickett was drafted into the NFL as a quarterback for the 49ers and, after a trade-filled NFL career, which included brief stints with the Texans, the Raiders, and NFL Europe’s Rhein Fire, eventually moved into the CFL, where he played for the Toronto Argonauts and the Montreal Alouettes before retiring from professional sports at the close of the CFL’s 2010 season.

Pickett’s experiences with the Huskies, the NFL and the CFL has made him a better sportsman and given him a unique perspective on coaching. A perspective he intends to put to work for the Mustang’s Lady Hoops, just as he did for Team 208 from 2009-2012, and Eagle’s North Star Charter’s boy’s basketball team from 2011-2013.

Throughout Pickett’s pro career he was exposed to three different college coaches and 19 head coaches in the NFL and CFL, each with a different personality and coaching style. Not surprisingly, this experience has given Pickett a lot of perspective on what kind of coach he wants to be on the courts; a perspective that, he hopes, will give him a unique edge on the coaching-side of the court.

“I want there to be a bond between me and my players. Many of my high school coaches have evolved into life-long friends, and I hope to do the same with my players.” Pickett says. “Coaching isn’t just about developing great players, it’s about developing great people, too. Ultimately, I want to be the coach each player needs me to be… I want to be the coach I’d want to play for.”

Pickett is already immersed in learning just what kind of coach is players will need. Coach Cody has been getting to know his players, along with their strengths and needs, since last spring’s training and summer camp program. The team started up again mid-August playing open gyms and is gearing up the official try-outs in October. Not surprisingly, Pickett likes what he sees and doesn’t feel that his goal of taking the State Championships is unreasonable in the least.

When asked if he’s willing to name names when it comes to “the one to watch,” Pickett doesn’t hesitate. “Sophomore Jenny Sevens is the one for sure,” he answers, “as a freshman last year, she started on the Varsity team. She has huge talent. She’s very coachable and has a big enthusiasm for the game.”

But Pickett knows that one huge talent does not a team make and is looking forward to working with all the talent on the court this season, including his talented roster of assistant coaches. Pickett will be joined on the court this season by assistant Varsity coach Kerry Angelos, assistant JV coach Tim Wooley, and assistant Freshman/Sophomore coach Kaitlyn Shannon, as well as Coach Ron Fortner, who was Pickett’s coach at Caldwell in the late 90s. Fortner, who is now retired, is volunteering for the team in an advisory capacity, and whom it is obvious Pickett holds in the highest esteem.

Pickett’s commitment to the program isn’t confined to the court, however. Pickett knows that to build a truly successful program that you have to reach out to the community for support. “To build a successful team you have to start early, and I’m not talking about early in the season, I’m talking about early in their game – I’m hoping to get to know the middle school talent now and support them too. I want these girls to aspire to be a Mustang, and to do that you have to go to their games and start cultivating those relationships now.”

However this coming season plays out, it’s clear that with Pickett at the helm of the Lady Hoops, Mustang fans will have something to cheer about all winter long.