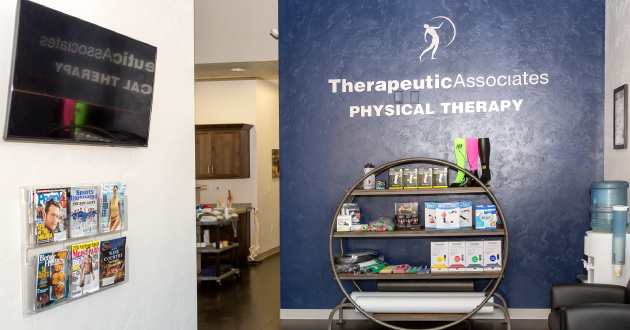 In September of 2014, Eagle native Mark Moss left a steady physical therapist job to open his own clinic. Now, after pushing through all the hurdles thrown his way, TherapeuticAssociates Physical Therapy is up and running in Eagle, and they are hitting full stride.

Business has improved in each successive quarter at the Eagle clinic—located at North Fisher Park Way and Idaho 44—which is adding programs and eyeing an eventual increase in staff.

Mark worked for about two years at the TherapeuticAssociates location in southeast Boise before leading the company’s expansion to Eagle, where he is clinic director. His role as physical therapist did not change, but his horizons did. The 31 year-old plans to spend his career in Eagle, his hometown.

“I feel more of a stewardship over our patients, and I look forward to being part of their medical team for the long term,” says Moss, who graduated from Eagle High School and Boise State University before earning a Doctor of Physical Therapy from Northern Arizona University. “I’m 100% invested.” 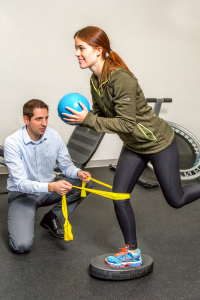 Moss and his wife, Paige, have two young children, and they live just a few miles from the Eagle clinic. He has seen the community grow and mature, and loves the environment Eagle helps foster for his family and his practice. “I’m excited to be part of it,” he says.

Moss largely designed the new clinic, with a little help from a builder and an architect. It’s adaptable to different programs and treatment approaches thanks in part to its mix of private rooms and open space. “It has been very functional, and exactly what we hoped for,” he tells me.

He hopes to hire an additional therapist in early 2016 at the Eagle clinic, which probably can house three to four therapists eventually. Now, he works in the 2,400-square-foot space alongside an office coordinator and two aides. Upcoming program additions include massage therapy and new exercise offerings.

Student athletes, outdoor recreationists, retirees, and people who own or work in local small businesses have been among clients. Families have come to the clinic—a parent receiving treatment for a work-related condition might send a child who just got a sports injury, for example. Appointments are available as early as 6:30 A.M. Monday, Wednesday, and Friday, and as late as 6:30 P.M. Tuesday and Thursday.

Patients “want to get back to doing what they love to do,” says Moss, a former basketball player who enjoys golf and various outdoor sports.

Competition is strong among physical therapy providers, but TherapeuticAssociates differs themselves from the crowd. As a company, TherapeuticAssociates strives to cooperate with all medical providers, whether they are independent or part of a large organization. TherapeuticAssociates, which fields two clinics in Boise and one each in Meridian and Nampa, also strongly emphasizes continuing education—in mid-October Moss was taking specialty instruction through the North American Institute of Orthopaedic Manual Therapy—and they strive to complete treatment promptly. Its patients are discharged on average after about seven visits, 4 and a half less than the national average, which can help patients combat rising costs. Moss also makes sure to see patients personally on each visit.

Next time you’re out on one of Eagle’s beautiful rolling golf courses and take a bad swing, be sure to visit Moss and TherapeuticAssociates to get back to doing what you love faster and cheaper, while keeping your business local.

Previous articleA River Runs By It: Banks Cafe and Store
Next articleKaren’s Kitchen