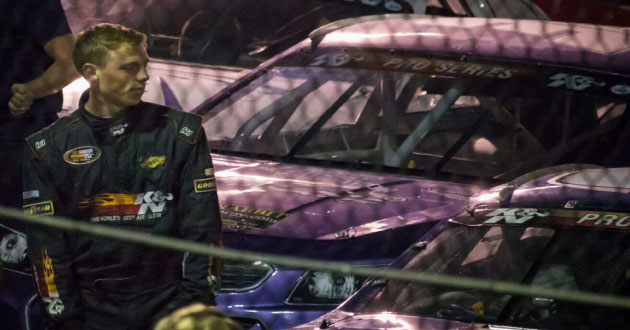 For race driver Stafford Smith, the call came about a month shy of his 18th birthday.

It was time to strap into a car with more than half again as much power as anything he raced previously. The event was the NAPA Auto Parts Wildcat 150 at Tucson Speedway May 7, the third of 14 contests (three road tracks, 11 ovals) in the televised NASCAR K&N Pro Series West.

“It was a lot of fun. I had never been on a track that big and had never been in a K&N car on race weekend before,” Smith said. “I never had that much power before … It was definitely an experience.”

Compared to some smaller cars, the 650-horsepower K&N setups at first feel powerful and fast-accelerating, but less nimble and harder to see out of, the Eagle High graduate said. A couple dozen nearby competitors add to the challenge.

Auto racing is a family affair for Smith, who said lessons he learned as a member of the Patriot Motorsports Group team in 2016 were as important as any of his race finishes as a driver. An 11th at Tucson, a 7th at Meridian and some other solid results complemented his work in the Garden City shop and on the nondriving crew at races.

“You realize how important working with a team is,” Smith said. “You can’t do it alone.”

On the Patriot team of about a dozen people, he is among the five or six who work in the shop regularly. There is plenty of work to go around, as teams typically field multiple cars in a race. Smith started nine K&N races as of early October, finishing almost all – a team accomplishment.

A freshman in Boise State University’s mechanical engineering program, he says he’s especially interested in chassis design and how the “entire car” works.

Smith said in 2017 he aims to race the entire K&N series “and help wherever I can with the team” while working toward graduation in the next four years. He is slated to get behind-the scenes experience at higher levels of NASCAR competition. “As long as I am surrounded by race cars and the atmosphere, it would be a good day in my book.”

Smith started racing go-karts at 12 in the Boise area, competing locally before traveling to larger kart tracks elsewhere and then getting into racecars.

His father, Kent Smith, has been involved throughout, most recently as crew chief and advisor with Patriot. The family moved from Canada about 12 years ago.

In the K&N series, “cracking into the top 10 is a strong advancement in his first year with the budget we have, especially since he did not come up the traditional stock-car route,” Kent Smith said. “We are building a team, and he drives for it. We’re very happy with the progress the drivers had and the team had.”

The group is working to bring a high-caliber karting track to northwest Eagle. “It’s an opportunity for a wide range of people to get involved in the sport and all its merits, and help the community at large,” he said.