Life is a Cabernet 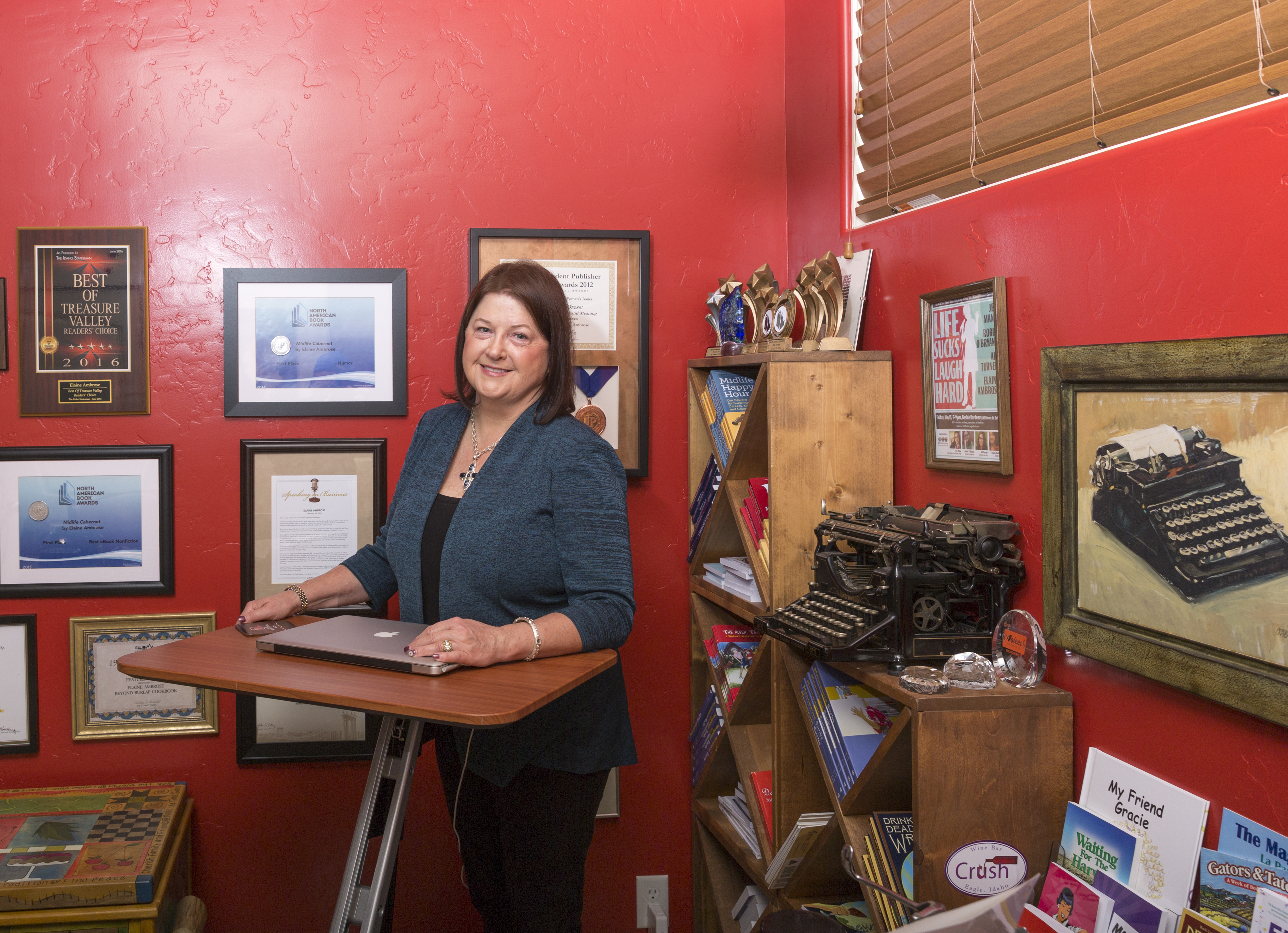 To say that 2016 was a busy year for Eagle author Elaine Ambrose is an understatement. The award-winning author of Midlife Cabernet, Menopause Sucks, and other books, spoke at four national conferences and kept up a publication schedule that would exhaust most people half her age. To date, Ambrose has published more than 150 essays in The Huffington Post in sections ranging from comedy to religion to divorce. She has come a long way from the 10-year-old girl who started writing stories on a potato farm in Wendell, Idaho. Elaine had a successful career in journalism and public relations and now has two grown children, five granddaughters, and one darling husband she calls Studley. This year, she’s focusing on completing her memoir, which explores her complicated relationship with her father.

I first met Elaine when I interviewed her for Eagle Magazine in 2007, and we’ve been friends ever since. I sat down with her in her lovely Eagle home to ask about her numerous writing projects and her plans for 2017.

EM: Probably everyone in the world has read your hilarious 2014 Huffington Post essay entitled “Don’t Fart During an MRI.” Can you tell me more about what it was like to have something go viral?

Elaine: You can never predict what will make something go viral. I had published eight essays on Huffington Post that month. It came at a time of great physical and mental pain for me. The day the MRI post went viral, I also met with hospice and medical staff to make the decision to withhold lifesaving measures for my mother. She had suffered from dementia for a few years and had slipped in and out of consciousness, refusing to eat. The last two days of October, I sat by her bed, holding her hand, and playing her favorite spiritual music from Tennessee Ernie Ford. I prayed for God to take her home. She died on November 1.

That week, the MRI post exploded internationally and was republished in six languages in Germany, Italy, Japan, Korea, Thailand, and in English in Australia. Whoopi Goldberg talked about it on “The View.” By December, if anyone typed “Don’t Fart” on a Google search bar, my name appeared–I’m so proud. The post received more than 800,000 likes on social media and was reprinted on several websites. I received emails from around the world, including some from medical personnel who thanked me because they displayed the post in their offices to soothe nervous patients. The attention was bittersweet. I was also planning my mother’s funeral while attempting to write more blog posts to keep the momentum. I had several others receive hundreds of likes, but none ever went so viral.

EM: In addition to writing for Huffington Post, you’ve also appeared on Huffington Post Live, and you write for other publications as well. Can you tell me about those?

Elaine: I appeared twice on The Huffington Post Live Show from New York. The first time was as one of 10 authors who wrote the ten most-read posts in the 10-year history of The Huffington Post. I also write for other websites: SixtyandMe, Erma Bombeck Writers’ Workshop, and Midlife Boulevard are the main ones. I’ve authored or co-authored 10 books. I have two established websites. My new one is for my latest book.

EM: Speaking of Erma Bombeck, many readers have compared your writing to hers. Do you see her as an influence?

Elaine: I love Erma Bombeck! She was my hero. She took on tough women’s issues like the Equal Rights Amendment when no one else would talk about them. One of the highlights of my career was speaking at the Erma Bombeck conference in April 2016. I gave two workshops, one on humor, and the other on how to turn your blog into a book.

EM: What would you say to a writer who is thinking about starting a blog? Is it worth the effort?

Elaine: I’d recommend it for brain health, if nothing else! Writing a blog post keeps my aging brain active. It’s similar to a writing prompt: I decide on a title and give myself two hours to write 600-800 words. So many women in mid-life are discovering writing and blogging. If you can write, and if you build up a body of work, you can get published. There are so many outlets!

To learn more about Elaine visit

You can learn more about her newest book at