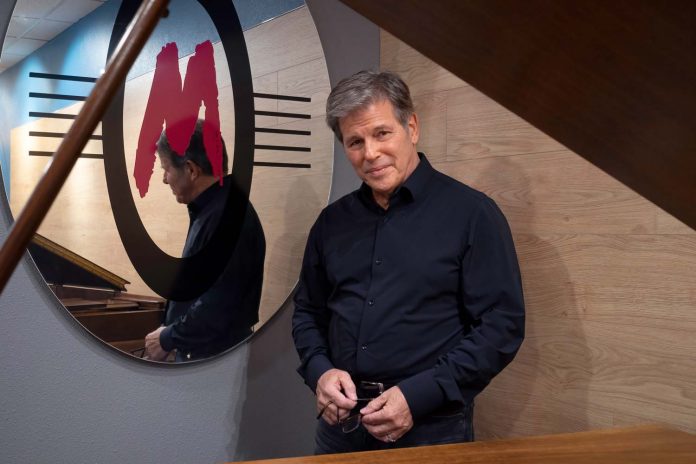 When asked how Mirror Studios got its name, owner Charlie Hewitt will tell you “What we get out of life is a direct reflection of what we put into it.” That passion started early in life when Hewitt began his music career as a singer/guitarist in Los Angeles. His early performing days led to a successful career in music recording. After relocating to Alaska in 1990, Mirror Studios branched out into audio post-production and filmmaking.

Eagle resident Charlie Hewitt moved to Idaho from Anchorage, Alaska in 2018 with the love of his life, his wife, Mary. He initially planned to work as an executive producer on passion projects and leave the production gigs behind. Or so he thought. It was not long before old friends and clients were asking him to do audio work for them. When a client asked Charlie if he would take on all post-production for a project, he quickly realized that Mirror Studios had simply been on hiatus.

In August of 2020, Mirror Studios was reincarnated. Hewitt’s sleek, state-of-the-art studio, located off Americana Boulevard in Boise, embodies what audio professionals have come to expect in the world’s largest markets. “I walked in there to discuss doing ADR (Automated Dialogue Replacement) and I felt like I was back in Burbank,” states Kelly Jean Badgley, a professional actress and VO (voice over) artist in Boise. “It was not just the studio itself – it was the professionalism and knowledge of everyone there. Mirror Studios will certainly become a home away from home.”

The environment at the studio is one of creative camaraderie. The paint was hardly dry before Mirror Studios was quickly joined by long-time collaborators Sprocketheads and Lovin’ Dog Music. This brings award-winning cinematography and original music composition to the mix. They all share a history of music performance, so the week often ends with a jam session.

Charlie Hewitt is proud to live in the Treasure Valley and gives back to the community in whatever ways he can including serving as a Professor of the Practice at Boise State University where he mentors film students in post-production sound. When asked if he feels that the film industry is growing in Idaho, Charlie is quick to say “Yes! We work with local filmmakers and creatives as well as major studios on everything from documentaries to feature films and television shows. People come to Boise to work on a film or TV project and they are blown away by all the talent here in the Treasure Valley. Students are being trained through Boise State’s film program; the Valley’s quality of life, kind people and its laid-back lifestyle compared to larger markets keep bringing people back; and industry veterans are quietly moving here. All of this energy creates more connections and opportunities for the Idaho film industry.”

Hewitt’s mantra is “Follow your heart.” During an hour and a half conversation, that expression was said a dozen times. And he lives what he says. In addition to current post-production projects, Mirror Studios is producing several documentaries about remarkable people. “We love working on projects in every genre, but for our in-house productions, we lean towards positive inspirational stories.”

Several years ago, Charlie Hewitt’s producing partner, James Walker, read an article in The Washington Post about Jeffrey Rease, a photographer who is traveling the country taking photos of WWII veterans for a project which he calls Portraits of Honor. These are not photographs of military superstars, they are photos of “everyday people who traded in overalls for uniforms, served their country, came back, put their overalls back on and went back to work. They are men and women from all parts of the country and all backgrounds. Of the sixteen million Americans who served in WWII, fewer than 230,000 are alive today. We are losing an average of 230 WWII vets per day,” says Hewitt with obvious emotion, “these heroes’ stories must not be lost.”

What caught Walker’s interest was how the veterans, as they became more comfortable with the photographer, opened up about their experiences during the war. It is typically a son, daughter or grandchild who brings the veteran to the photo session. These are often stories that had been tucked away as a distant memory and had never been shared with the family. One adult grandchild sat in awe as he heard his grandfather tell of his plane being hit over Normandy in the northwest of France. He was knocked out during the attack and regained consciousness as he was falling through the sky. He managed to open his parachute and landed, with injuries, in a French farmer’s field. The farmer hid him there, risking his own life, until the Resistance showed up three weeks later to take him to safety. This is the kind of story that inspired Charlie and James to acquire the rights to the project, and they have been developing the documentary film Portraits of Honor, www.portraitsofhonor.com

The Great Soul Crossing is another documentary project in which Hewitt is currently immersed. It follows the journey of Marine Corps veteran, ultra-runner, and author of Fearvana, Akshay Nanavati, as he prepares for his solo crossing of Antarctica on foot.

Akshay Nanavati is a former US Marine of Indian descent who served in Iraq. It was the film Black Hawk Down that snapped him out of drug addiction and motivated him to join the military. He saw people putting their lives on the line to save others. “Who does that?” he pondered, and his question was answered during his seven-month deployment. It was people like him.

Sadly, like so many other VFWs, returning to civilian life was not easy and he was often awake and sober again just long enough to tap into another bottle of Vodka. He realized one day that his current condition was neither who he was nor what he was trained for. He
had to face his fears at the deepest possible level and has since taught others to do the same through his book, Fearvana, seminars, and personal coaching.

After forming a solid support group, Nanavati began training, physically and mentally, for a one-person trek across Antarctica pulling a 400-pound sled. His commitment to the extreme training is echoed by his entire team. Nanavati’s solo trek will begin in late 2023. The journey across Antarctica is expected to take 105 days and cover approximately
1800 miles. Though he will be alone, he will be checking in via his GPS daily so that we will all be able to follow his progress. A camera crew will send him off and will cover the last few days as he reaches the other side. The footage of his training is mind-blowing and Mirror Studios’ fabulous audio mix of the howling wind and an uplifting soundtrack take the viewer into an intense thrilling vortex. Although Antarctica has been crossed solo, this will be the first unsupported trek.

And in his spare time (this is irony), Hewitt and his partners are in the development of a distribution platform for narrative and documentary films and TV shows…all focused on positive stories.

Charlie Hewitt describes himself as a sentimental guy. I describe him as an amazing human whose love of family, his community, and his work are proudly shown in every aspect of his life.