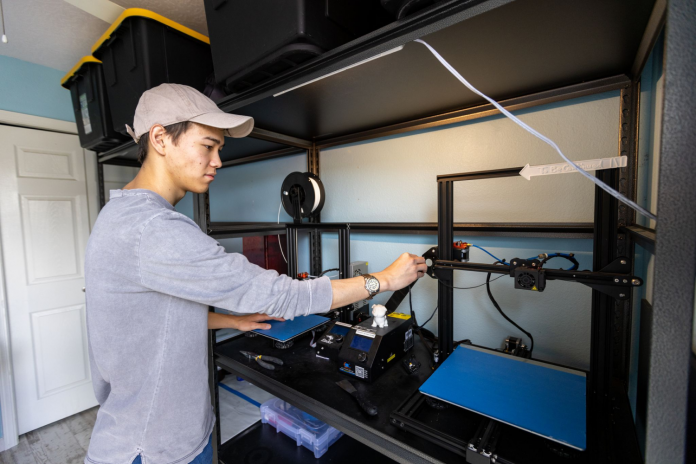 Art with function and purpose – the road to practical effects

Our future lies with the young and hungry. As we get older, we learn this. We do not always take the time to stop and think about this as we trudge on with our day-to-day lives. Their journeys are treacherous. They navigate their way through a world we have created for them and carve out a place for their future. In their own humble and timid way, they will find a means to make us see they are the keepers of our tomorrow.

When I first approached Alek Lavigne, he had no idea why I would want to interview him. He said, “I feel like I’m a relatively normal person.” That kind of humility, in a nutshell, is why I wanted to interview Alek.  As we talked about his experiences in becoming a practical effects artist, it became apparent to me that his story is anything but ordinary. Everything happened so naturally. It is easy to see why he never saw it any other way. As a door opened, he merely walked through it. When an opportunity presented itself suddenly, there was no time to debate the pros and cons. Sometimes, you just have to live in the moment and life will make itself.

Alek revealed to me when he was in middle school that he struggled socially and academically. His focus seemed to always drift to movies and art. He was always creating, and his mother took notice. “She knew I was different, not in a bad way,” he laughed, “but my mother understood better than I did.” She chose to pull him out of traditional school and enrolled him in an art school. He remembered having to interview to get into Arts West. He brought in his creations and showed off his skills. Not only was he accepted, but he was also placed into a high school, advanced art class.

Alek Lavigne thrived at Arts West. He was in an environment made up of like-minded children. “Everyone there was very supportive. All my friends were artists in one way or another, so it was like we were feeding off of each other.” As a child, his life seemed very normal to him. Being able to only experience life through his own eyes, he had no other basis for comparison.

When Alek was 15 years old, he knew he wanted to work in the effects industry. He always had a love of movies, and one, in particular, was Jurassic Park. He was in awe of the effects of the dinosaurs. To see dinosaurs stand next to people would be almost unimaginable without the magic of movies. He wanted to learn more about how the movie had done this. Eventually, he stumbled onto a behind-the-scenes video of how the dinosaurs were built. “That was my first exposure to that line of work. I thought, ‘That’s a job somebody has and I could do that.’” He became inspired to build more props and costumes.

In high school, Alek had a passing thought, but it was only that. “Maybe I was a little weird,” he said. “No one else was making movies and miniatures.” During his later years in high school at Hall Academy, he learned real-world applications for his art. He recalled, “Crit Killen came to my school with the Beetlejuice costume encased in a glass box.” He remembered thinking, “It was really awesome.” Crit Killen was doing exactly what Alek Lavigne wanted to do with his life. Crit has created everything from concept art on Blade Runner to creature effects on Gremlins. His work has been influencing imaginations on the big screen for decades. This experience only further enforced the drive Alek had to achieve his dreams.

He knew the work he was doing in creating practical effects was an achievable career goal. He held fast to his aspirations saying, “It has always been a dream of mine to work for Legacy Effects or Jim Henson’s Creature Shop.” This was his whole world, but then a shadow of doubt crept in. Around Alek’s junior year of high school, he seriously thought about his future. He started thinking about what most kids think about. “I worried about my next steps.” He wondered, “Where am I going to go to college? Am I going to go to college?” He remembered something his dad said to him, “You went to this school for a reason. You’ve invested time into this venture and it’s for a purpose.” He revealed to me, “My parents have always been extremely supportive. They’ve always had faith in me to do what I love and they have always backed me in what I choose to do.” Alek’s parents relieved his anxieties which allowed him to continue his journey.

At the age of 17, Alek was asked by his cousin to model some work for him at a convention in Utah. His cousin, Walter Welsh, worked with practical effects, in make-up and prosthetics. He was also a runner-up on season 10 of the show Face Off. Purely by coincidence, one of his teachers was part of a panel at the same convention. This chance meeting eventually led to Alek being introduced to Caleb Chung, an inventor and toy creator. His office just happened to be in the same building as Hall Academy. Caleb Chung is one of the creators of Furby and the inventor of Pleo. After a meeting with Caleb at It’s Alive Lab (IAL), Alek began interning there. Caleb Chung would become his mentor and the workshop would be another nudge in the direction of Alek’s destiny.

“My time at IAL was a little intimidating at first. Everybody else was an adult and a professional in their field. I was only 17 when I started there, but they all made me feel welcome.” He told me, “I gained a lot of confidence working there with my mentors, Caleb Chung and Patrick Garrity.”

Alek is now 20 years old. He is actively applying for work in practical effects but never stops building his creations. He said, “I always have a side project going.” He is always expanding his resume with more creations. He recently interviewed with Jim Henson’s Creature Shop and is waiting patiently for a response. He laughed, “I’m willing to drive down there and personally hand them my resume if that is what I need to do.”

As our conversation came to an end, I asked Alek Lavigne two more questions. The first was if he had a favorite project or creation. He said, “I have a special place in my heart for all my projects. It’s a milestone for where I was at the time. When I finish it, I have a sense of pride.” My last question was about reflection. Being able to look back, I asked whether he felt he had missed out on anything in his childhood. He admits he had thought of it. He had never gone to a Homecoming game or a high school party, but he told me, “Maybe I would have had a good time, but what I got in exchange, I cherish much more deeply.” He went on to tell me all the things for which he is grateful. “If I’d gone to a traditional school, I certainly wouldn’t have ended up at IAL. If I hadn’t taken the path I did, I wouldn’t have met the artist who gave me the opportunities I had. I’ve put so much work in, and others have put so much time into me, I’d be letting them down if I did anything else.”

Alek Lavigne is thankful for every encounter he had and the path his parents opened up for him. Their support led him to where his happiness lies. He feels he owes a great deal to those who have supported him and helped him get to where he is now. He thought of his father, “My dad would never say it, but I feel he set aside his dreams for the betterment of his kids. I feel like I owe him by doing this. He always said, ‘If you have a dream, you have to try. If you don’t, you’re going to regret it the rest of your life.’”

Previous article
Vineyards in the Foothills
Next article
The Buich Family