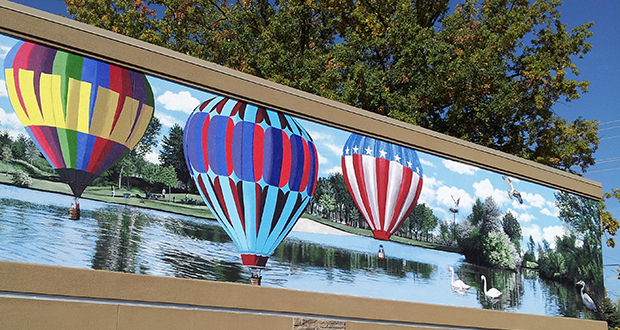 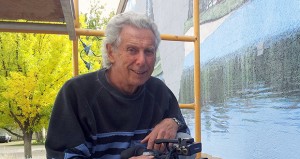 Eagle resident Michael D. Margulies, ASC, worked for over 35 years as a cinematographer for feature films, television movies, and commercials. He has 77 credits as a cinematographer and has worked with actors such as George Kennedy, also an Eagle resident, Mary Tyler Moore, William Holden, Jimmy Stewart, Peter Fonda, and Marion Ross. Last summer, Michael employed his cinematography skills, but also wrote, directed, and produced his first film, a documentary called Evolution of a Mural. This project began when Michael met Brenda Kaye, the muralist, as she was completing the mural at Eagle’s Smoky Mountain Pizza in 2012.  Michael says he had been wanting to make his own film for quite some time, and everything seemed to come together to make Evolution of a Mural, which is about the creation of a mural, but more broadly about the creation of art.

In summer 2013, Michael was driving down State Street and saw a notice from the Eagle Arts Commission that Brenda Kaye was going to paint the side of the liquor store.

“A photographer and cameraman is never without a camera,” explains Michael, “so I got a few shots of the liquor store before any work was started. The film covers the entire project from beginning to the end.” Filming took four months, from July to October 2013.

The 15 ½ minute film documents the work of local artist Brenda Kaye who created an 86 foot mural depicting a scene inspired by Eagle Island State Park and the Spirit of Boise Balloon Festival.

“I wanted to capture the painting of the balloons but didn’t want to spend a lot of screening time on it,” Michael explains. “It was my first experience with time lapse photography. I marked the spot on the ground where my camera needed to be and set it up in the same place every day for weeks.”

The hardest aspect of making the film for Michael was, as he says, “The waiting. I’m used to shooting all the time on a feature film but on this film I had to wait until Brenda painted another area I wanted to film.” He also points out that films are typically shot out of continuity, but Evolution of a Mural was shot in continuity.

Michael grins, “And there are no second takes when filming an artist at work.”

Artist Brenda Kaye explains, “Michael spent numerous hours filming and documenting while I painted. He added another layer of public benefit by sharing this process through his lens.  Sharing art makes the world a better place.”

Michael concludes, “It was challenging but lots of fun. It was very different to see a film through from start to finish–usually as a cinematographer I just shoot it and I’m done. This time I was involved from the beginning all the way to the finished edit, and it came out great.”

Over $6300 was raised with a Kickstarter campaign to complete the film, and over 20 hours of footage was shot. Michael enthuses, “It was a great challenge and I loved every minute of it.”

Michael wants all students to see Evolution of a Mural, and is making connections with school principals and art teachers. He is also entering film festivals including the Eugene Film Festival,  Louisville Kentucky Film Festival, and the Sundance Film Festival.

Michael advises aspiring filmmakers, “Take my class at BSU. I’m an adjunct professor in the communication department and teach Advanced Cinematography.” He tells aspiring cinematographers to work their way up through the ranks.

Besides the recent mural project, which he found both challenging and fun, Michael is proudest of his work on Hidden in Silence, for which he was nominated for an ASC Award. Shot in the Czech Republic, “Hidden in Silence is a true story that takes place during WWII. It’s about a 17 year old Catholic girl who hid twelve Jewish refugees in an attic for two and half years from the Nazis until the Russians came and liberated them.”

Michael’s interest in film started when he took an elective in anthropology at California State University Northridge from Dr. Carpenter, who “was using film as a communication medium. I made three student films he liked a lot and suggested I go to UCLA. I started a Masters Program at UCLA but dropped out when I got a job.”

Michael has lived in Eagle, Idaho, since 2000 and is a member of the Idaho Media Professionals (http://www.idahomediapro.com). He is also a member of The American Society of Cinematographers (ASC), The Academy of Motion Pictures Arts and Sciences, and gets to vote for the cinematography category at the Academy Awards. He was awarded the American Society of Cinematographer’s Pioneer Award, and now Michael is a pioneer in another aspect of his career. Michael’s directorial debut, Evolution of a Mural, is a captivating glimpse at the creative process of one of Eagle’s most creative people.

If you would like a copy of Evolution of a Mural for your school or personal library, contact Michael at mdmargulies@yahoo.com.

Previous article
Christmas in the Village
Next article
Supplemental Income