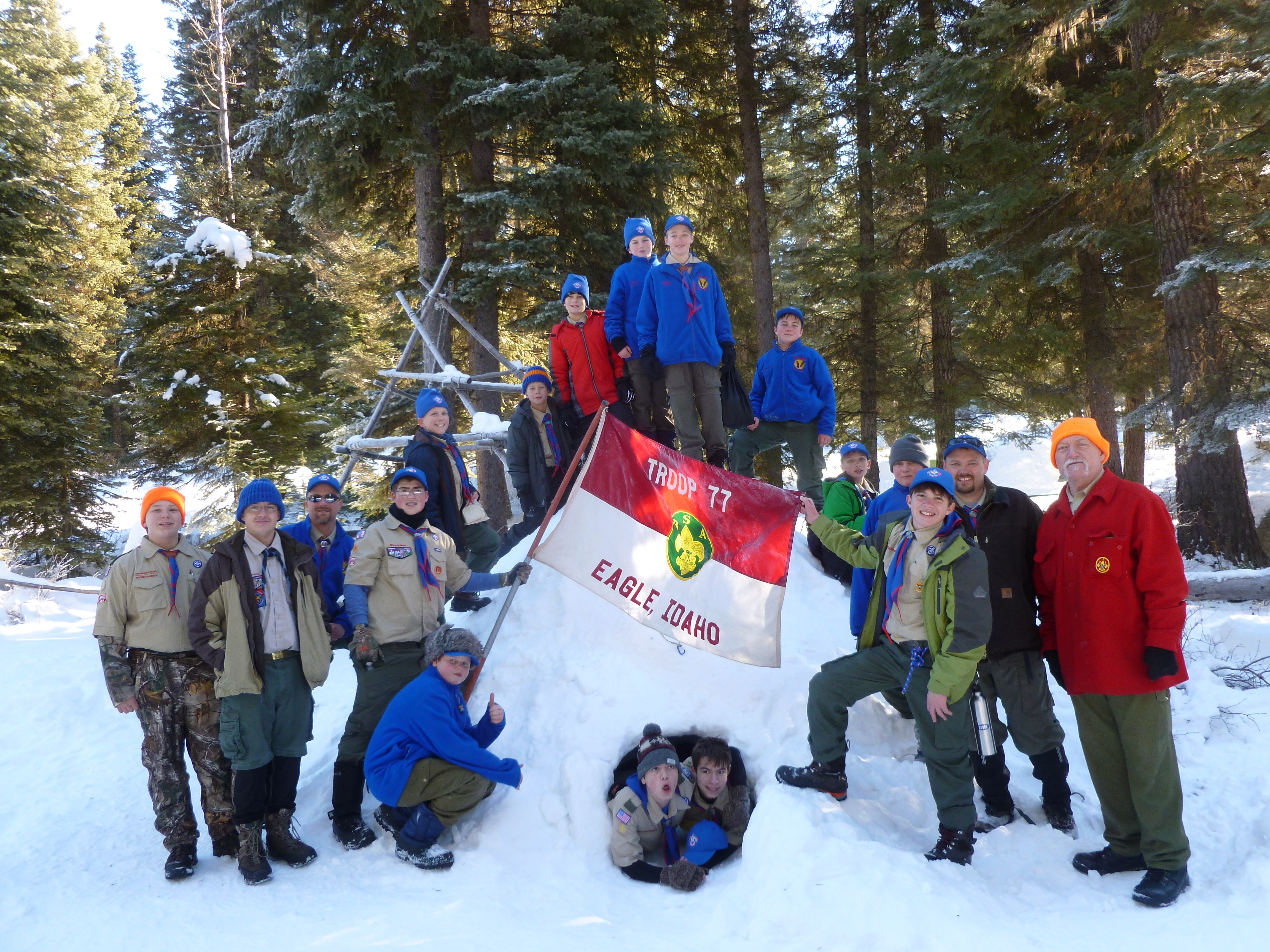 It’s all about survival for these young men, and they conquered it.


Most kids love to frolic in the snow – but how many can rescue you from an avalanche, set your broken leg, light a fire in the snow to keep you warm, treat your frostbite, and find the way back to civilization?

That kind of real-world training goes on every year at the Ore-Ida Council Boy Scouts’ Winter Survival Camp – along with a healthy dose of sledding, campfire cooking, and other winter fun. And the top-scoring Troop in this year’s competition was Troop 77 from Eagle, Idaho.

“One of my favorite parts about winter survival is being there with my friends,” said Troop 77 Senior Patrol Leader Chad Colgrove. “We want to make it fun so our younger Scouts will come back every year and tell their friends about it. When we heard that first place and second place were so close, we really got excited. It was a lot of fun to see our Scouts’ passion for victory in action.”

This year the Winter Survival Camp was held January 17-20 at Camp Morrison, a BSA camp in McCall, Idaho. Scouts and leaders from all over the Council arrived Friday evening and spent the first night bunking in the Lodge. Starting bright and early Saturday, Scouts worked in pairs to construct shelters from the snow in which they slept the next two nights. Shovels, snow saws, and tarps – along with tent pegs and lots of paracord – went into building snow caves and snow trenches. In some years, there isn’t enough snow to really build shelters – but this year the snow varied from one to four feet in depth, which proved more than adequate.

In keeping with the Scout motto of “Be Prepared,” Scouts learned firsthand the importance of dressing in layers to fend off the cold and sleeping warm and dry with the aid of a liner bag and bivy sack. Even though overnight low temperatures dipped down into the low teens, they all slept just fine in their improvised snow shelters. And that’s the kind of experience that may prove useful someday. It’s said that one in three Eagle Scouts will save another person’s life.

Sunday morning marked the beginning of the competition, which pitted 10 patrols from six different Troops in the Council against each other. Scouts worked together as a patrol to earn points based on their skills in realistic scenarios.

In the Winter Rescue Scenario, Scouts used their map and compass skills to locate victims. Upon finding them, Scouts performed first aid on live volunteers whose mock injuries included broken legs, collar bones, and hypothermia. The Scouts built fires in the snow for warmth and to signal for life flight, along with signal mirrors.

In the Avalanche Rescue Scenario Scouts learned how to find victims buried in snow using radio transponders. Once the victims (in this case, boxes with transponders inside) were located and dug out, Scouts learned to administer cold weather first aid and transport victims to safety.

Because a big part of a successful rescue is staying mentally focused, a member of the Civil Air Patrol was on hand to provide training in the psychology of survival and additional signaling and survival techniques.

Troop 77 is a community Boy Scout Troop chartered by Eagle United Methodist Church. The Troop welcomes all boys and parents interested in Scouting to attend meetings on Tuesdays at 7:30 p.m. at the church. Troop 77’s website is located at www.troop77eagle.com, and features a calendar of upcoming events. For more information on Scouting or if you have an idea for a community service project, please contact Scoutmaster Kevin Platts at 938-5152 or via email at troop077scoutmaster@gmail.com.