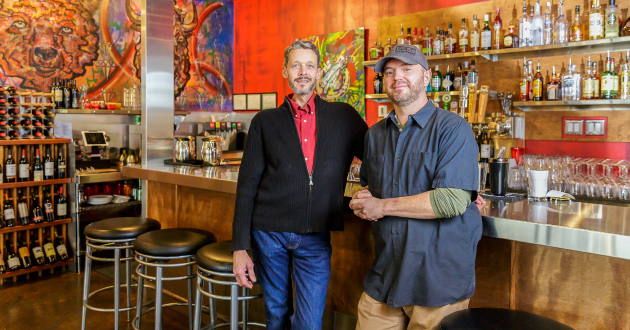 A new culinary landmark in Eagle

Except for the shine inside, Eagle’s newish Grit American Cuisine looks long-established. 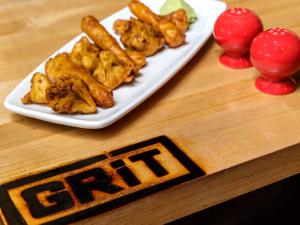 Meat-cutting entrepreneur Dave Faulk and Marineturned- chef Paul Faucher says Grit (styled GRIT with two-segment “I”) started strongly because the menu had broad appeal and the crew got in sync early – several employees worked together at Boise’s 10 Barrel Brewing, where Faucher was executive chef. Grit opened November 12th, and in its first week already had evening customers waiting briefly to be seated.

A familiar but twisty menu, an ear for customers’ comments, and an eye for ingredients combining freshness and affordability seem early hallmarks at Grit, which Faulk owns and Faucher operates in the Albertsons-anchored plaza near downtown.

“It’s a great collaboration of our talents,” says Faulk, who owns Porterhouse Market in Eagle. “I am a meat guy who can source great meats and Paul is a great chef who can present it to the table.” Grit emphasizes locally sourced food in a casual atmosphere at a reasonable price.

Working with familiar meals is a fun change for Faucher, whose experience is in fine dining primarily. “We are just doing food that chefs like to eat, in a fun working environment without any constraints,” he says.

Grit produces many of its own ingredients, such as smoked bacon, ham, and pastrami. The restaurant customizes and fine-tunes its meat orders from nearby Porterhouse.

Grit seats 55, employs 22, and has a full bar. As of late November, the 1,500-square-foot restaurant was opening at 11 A.M. every day and closing 9 P.M. Monday through Thursday. Friday’s and Saturday’s they stay open an extra hour until ten, but Sundays they close around two or three. Early on, the staff was working on a brunch menu. 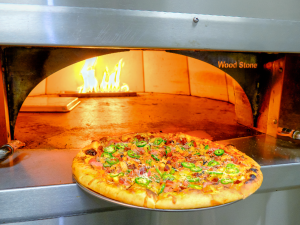 Cultivating a “unique, fun atmosphere” is one of the staff’s goals, Faulk says. He said visual artist Lukas Evergreen likely will be assigned projects in addition to the wall-sized mural he has already created inside Grit.

Faulk, 50, grew up in Eagle and attended Boise State University. He has had a career as a butcher and independent business owner since 1990.

Faucher, 40, grew up in Fairbanks, Alaska, and has lived in Eagle about ten years. He served in the U.S. Marine Corps and attended the Culinary Institute of America. His 16 years as a chef includes stops in New Orleans, New York City, and San Francisco. For 2016, Faulk and Faucher target succeeding with Grit and looking into new Eagle food concepts that could include separate, standalone locations, they say. Keep an eye out, and be sure to stop in and try Eagle’s latest excellent cuisine.