To the father-son team of former law enforcement officers running Eagle Triple Tap, everything has to be done the right way. No detail is left unattended, from the beautifully crafted relaxed atmosphere to the ever-growing line-up of 30 different craft beers. The bar is off to a strong start after opening December 18th on East State Street near Edgewood Lane.

Patrick Weber, 50, and son Brandon Weber, 26, left jobs at the Payette County Sheriff’s Office last summer. Pat retired from the sheriff’s department, while Brandon wrapped up a nearly nine-year stint there to start building out the 1,435-square-foot bar’s interior.

Triple Tap adds to Eagle’s hospitality offerings while letting its owners do more relaxing than they’re used to. On a Friday afternoon in late January, as Pat welcomes people and Brandon juggles the multiple tasks a bar’s general manager must, patrons seem to notice their hosts’ at-ease presence.

“As a police officer, you’re always looking over your shoulder,” he said. “Here, I get to just relax and enjoy the customers.”

Brandon, who worked as a jailer, said when people see him in his new role, “they know they are going to have a great beer and a good time.” 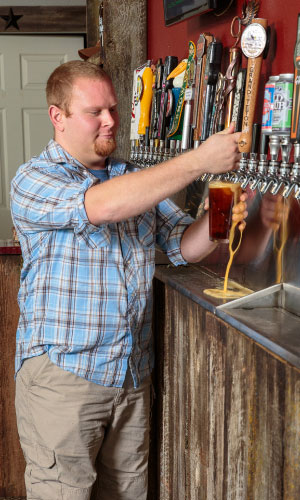 Triple Tap offers 30 handles and has room to go up to 40. The handles, featuring various physical and artistic features, identify the beer they dispense and its originating brewery. Beers from Boise, the north Idaho panhandle, and others in the region have been featured. They are rotated seasonally, with the most popular brews being retained. The bar maintains a balance between popular India Pale Ales and other beer styles.

“Our goal was to bring local and regional craft beers to beer connoisseurs, as well as introducing newcomers to craft beers,” he said. All of this is contained in a relaxed atmosphere that’s “kind of like an adult coffee shop.”

A limited selection of wine will expand in the next six months with the addition of a kegged-wine system with the potential to expand if demand warrants. Also planned are a small menu of foods, patio dining adjacent to a gas fire pit, as well as more hosted events and music nights.

Pat owns Eagle Triple Tap LLC and works there part-time, where he enjoys working together with his wife, Angie Jenkins. Earlier, after a member Angie’s family was injured, a benefit was held at a similar-feeling establishment that left a positive impression on Pat.

“I loved it. It was beautiful—not your typical bar scene,” Pat said. He went to work in January 2015 on plans for what would become Triple Tap. “I am very appreciative of the community welcoming us. This has just been great.”

Brandon, who has an ownership interest, said Triple Tap has attracted some off-duty emergency services personnel and their families as well as various local residents and passersby.

“We wanted to go into business together and do something we both enjoy,” he said, referring to his dad. So far, customers seem to be enjoying Triple Tap as much as its owners have enjoyed crafting it. Be sure to stop in and appreciate Eagle’s best “adult coffee shop.”