The Colors of Heroes 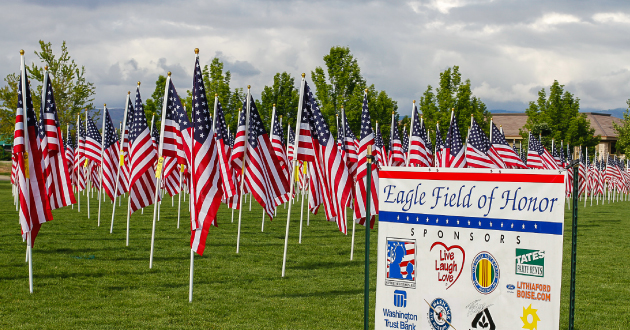 Eagle’s Merrill Park will be transformed on May 20th to a Field of Honor when volunteers gather to fill it with 600 U.S. flags in perfect rows. It’s appropriate that it happen in Merrill Park as Eagle’s former mayor, Nancy Merrill, began the Field with her Mayor’s Youth Council in 2006.

“Nancy had seen a Field of Honor in Washington DC and wanted to host one,” recalls Heather Paredes, current project co-chair with her sister Kathy Coburn-Limbaugh. The sisters now run the event with the help of family and friends and the cooperation of the City of Eagle. “This is our 10th year being involved and our 9th year running it,” shares Paredes.

Paredes invites everyone to help set up on Friday May 20th at 4:00pm at Merrill Park or help take-down on May 31st at 6:00pm. Sponsors and cash donations are also welcome. “Cash donations allow us to sponsor flags for individuals who don’t have anyone to sponsor a flag for them,” states Paredes. It costs only $30 to sponsor a flag. “The purpose of the Eagle Field of Honor is for anyone to be able to honor their loved ones no matter when or where they served. At the end of the event they keep the flag. We have shipped flags overseas to our currently serving men and women who have carried their flag in their packs while deployed. We have shipped them all across the United States to military families and veterans. We mail them with a letter explaining the Field and why they are receiving the flag.”

“The Eagle Field of Honor is a tribute to all of our nation’s military, past and present,” explains Paredes. “The Field represents all who have served, including all veterans, POW, MIA, all those who have served throughout history and throughout the country as well as our currently serving military personnel.”

“The flags will be displayed from May 21st through May 31st, 24 hours a day,” says Paredes. “We have lights on the flags at night. It is the most peaceful time to visit the Field. We have volunteers who watch over the flags throughout the night.” The opening ceremony, with a keynote by Brigadier General Walter Donovan, USMC (Ret.) begins at 4 pm on May 21. Bagpipers, buglers, and weather permitting, a flyover from the Warhawk Air Museum will be part of the ceremony recognizing the attending servicemen and women. A BBQ dinner will follow the opening ceremony and is free for all veterans and currently serving military personnel. A $5.00 donation is requested for any non-military attendees. Visit www.eaglefieldofhonor.org for flag sponsorship forms and BBQ ticket information.

Ribbons are tied to each flag pole and placed in alphabetical order by last name. “All branches of military, all wars and campaigns, and all eras are intertwined throughout the 600 flags,” notes Paredes. “As you walk down a row of flags, reading the names on the ribbons, they may be in an order such as: a pilot who served in the Army Air Corps during WWII next to the flag of someone who served in the Marines during Vietnam, who is next to a woman who served in the Army National Guard who served two tours in Iraq, next to a Navy Corpsman currently serving. To me, it is a sign of unity among all of our nation’s heroes.”

“We wanted to continue the Eagle Field of Honor because of the people we met during that first year’s event,” says Paredes. “I’ve never seen such appreciation and awe. It’s a sad truth, but for many of our veterans this is the first positive recognition they have received from the civilian population regarding their service. This is especially true for our Vietnam veterans. We have had the distinct honor of meeting some of the most amazing people and have been blessed with stories that range from deeply sad and heartbreaking to joyful, patriotic, and even quite funny. The Eagle Field of Honor is a place where they can reflect on those experiences and has become a place of healing for many.”

“I did not serve in the military, but I cherish my freedom and the fact that my children are able to dream and follow their dreams,” affirms Paredes. “This is possible due to the sacrifices of others. Because of people like my father, my uncle, and so many others who did serve, our lives are what we want to make of them. Being given that choice and that freedom is a huge responsibility that I take very seriously. The Eagle Field of Honor is our way of saying Thank You.”