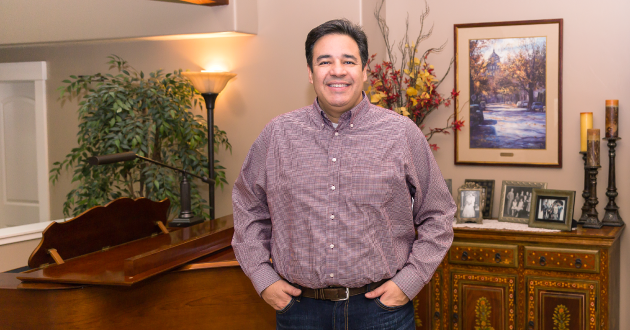 Eagle resident and an American politician

In his third term as Representative for the First District in Capitol Hill, Congressman Raúl Labrador is a busy man. He recently co-wrote and co-sponsored a bipartisan bill intended to increase judges’ discretion and reduce mandatory minimum sentences for nonviolent offenders. Criminal issues have been part of the Congressman’s agenda since 2010, so his efforts come as no surprise.

The morning we met, Labrador’s office was teeming with members of his constituency. At 49 and with a family of five children ranging from 13 to 23, the Eagle resident is almost a decade younger than the average member of the House.

During his last campaign for re-election, his opponent insinuated that he was not an American because he was born in Puerto Rico. His Hispanic name and upbringing could lead to confusion, but Puerto Rico is a territory of the United States and people born there are natural-born U.S. citizens. Nobody from Puerto Rico has ever run for the presidency but in 2013, during a hearing of a sub-panel of the House Appropriations Committee, Supreme Court Justices Anthony Kennedy and Stephen Breyer seemed to indicate that a U.S. citizen born in Puerto Rico could be eligible.

Labrador credits his late mother, Ana Pastor, for being his early inspiration. “She was a wonderful, brilliant woman and the best mother any child could have,” he says. The family lived near a beach resort where Mrs. Pastor, a single parent, worked in the hotel industry. Labrador keeps fond memories of his early years in Puerto Rico. “My best recollections are being close to the water,” he says. “I would walk to the beach almost every day and just watch the waves. As a child that was beautiful.”

Labrador’s mother was very involved in the political life of the island. “There were always political meetings at my house, usually revolving around issues of possible statehood,” says Labrador, “and that is how I became interested in politics.” An admirer of JFK, Mrs. Pastor taught her son that his first responsibility was to go to school, study, work hard and make something of himself. But, that once he became successful, his moral obligation was to serve others and participate in making their lives better. “She thought the Kennedys exemplified that,” recalls Labrador. “Ironically, she was a Democrat who was anti-statehood and I became a Republican who is pro-statehood.”

Realizing that he needed to learn discipline, Mrs. Pastor placed her young son in a military school for four years. When Labrador was 13, the family moved to Las Vegas. Setting a good example, Mrs. Pastor continued working full-time while going to school to earn a degree in education. At about that time Labrador joined the Church of Jesus Christ of Latter-day Saints, taking part in their Mentor Program.

“I found two mentors in Las Vegas,” says Labrador. “The first one was my Scout Master, who was not a wealthy man but gave a lot of his time to people (in need) like me. The second one was my bishop who became my personal friend and, frankly, a man who changed my life. He had a scholarship for young disadvantaged students and that is how I was able to go to college.”

Labrador’s first job was delivering newspapers. While doing his undergraduate work at Brigham Young University, in Utah, he worked as a shoe salesman and did all kinds of minimum-wage jobs. “One of my favorites was flipping burgers at Tommy’s Burger, in Provo, Utah,” he says with a smile, “they were homemade, we made them fresh daily from scratch.” After marrying Idahoan Rebecca Johnson, the couple moved to her home state, where Labrador worked in landscaping, making $6 an hour. “The best thing about doing the landscaping job is that enabled me to really concentrate on law school.” In 1995, Labrador earned his law degree from the University of Washington and established a successful law practice with offices in Nampa and Boise.

When asked if it was hard to do what people in his district demanded versus what he personally believed was right, he said that he has always been transparent. “I tell my constituency what I’m going to do. Even when they disagree with me they know that I follow my conscience, the dictates of my heart, and I do what I said I would do. Some politicians make a lot of promises but when they get to Washington they get enamored with the magic of the place and allow themselves to be influenced by interest groups.” Reflecting on his future in politics, he added: “There are a lot of opportunities out there but I’m going to take things one step at the time. My next job is to do my job well and to the best of my abilities.”

As a founding member of the House Freedom Caucus, recently Labrador was at the center of efforts to oust Speaker John Boehner and shake up the House’s leadership. The Freedom Caucus is a group formed to advance a conservative agenda of limited, constitutional government in Congress. According to Labrador the Caucus aims at giving a voice to people who feel that Washington does not represent them. “With a small group that is able to work on issues that are of importance to our constituents, we can make a difference for people back home and keep Congress honest.”

Regarding education, noting that our go-on rate is so low here and that Idaho is near the bottom in students who complete a four-year college degree, Labrador wants our educational system to encourage those who want to go on to college to attend, helping them graduate, but also give more opportunities to those students who want to go to a trade school. “The American dream is not about making money, but being the best at what you want to do with your life. When our young people are fulfilling their dream, they are living that American dream.”

Pondering the economy, Labrador is bullish on Idaho. “This is a great place to raise a family,” he says, “but we need to go out and promote our state. A lot of people are not familiar with Idaho; they don’t realize what a wonderful place to live this is.” He blames the fact that Idaho is not attracting industries that could provide better paying jobs on our high tax rates. “We need to flatten our tax rate, and that would make us more attractive for high tech industries and other companies to come to Idaho. We could become a hub for the high tech community and really grow the economy.”

Poll numbers for the last election suggest that most people in his district believe that Raúl Labrador is a dutiful politician, but above all he is a family man. In the past, he has been criticized for missing votes in Congress in order to be there for his children’s milestones, but he makes no excuses for that. “My wife and children come first,” says Labrador. “They are my inspiration.”

Previous article
Through the Painted Window
Next article
Rising Strong