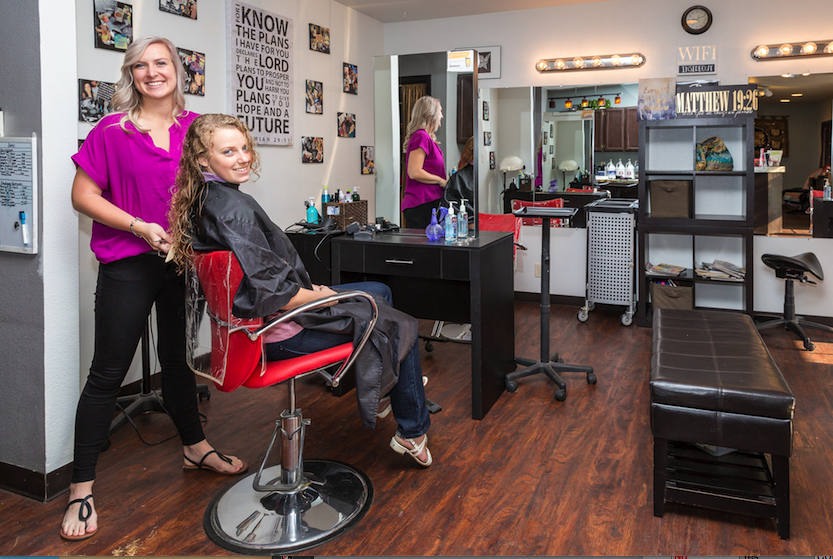 Growing revenue and a broadening clientele aren’t all that Dawn Maglish, founder of the nonprofit INsideOUT Salon, appreciates as the salon approaches its six-year anniversary in November. Its ability to raise awareness and advocacy for juvenile victims of human trafficking pleases her even more.

The salon on East State Street is part of an Eagle-based nonprofit organization advocating for juveniles who are at risk or victims of human trafficking. The salon’s net proceeds go towards work the organization does with youth, largely in conjunction with public and community entities, Maglish said. After working internationally for three years, INsideOUT shifted its focus to southwest Idaho.

“We want people to know it’s not just an international, overseas problem. It’s happening right here,” she said. “We literally have worked with a child from every town in the Treasure Valley.” The it-happens-elsewhere mentality is understandable to Maglish, who came up with the idea for the nonprofit salon after seeing an overseas-centered news report that left the college basketball player-turned-cosmetologist and mom wanting to learn more about the implications and reach of human trafficking.

“I wanted to do something with a purpose,” she said. “I didn’t just want to work for money. I wanted to make a difference in the world.” Human trafficking is “everywhere, in every community,” Maglish explained, noting the mission-related workload has more than doubled since the organization’s inception.

Growth of the salon’s revenue and client base, and the number of youths found in need, has been very strong, but recently limited to an extent by capacity. Board members are considering adding a second salon, but a timetable and location are still to be determinted.

INsideOUT derived its name from Maglish’s experience that “When people talk about feeling good, or beauty, it’s from the inside out.” The salon has benefited from Eagle’s quaint, welcoming atmosphere, its supportive, socio-economically diverse people, its strong, sizable senior community, and solid support from area churches.“ It’s definitely community-supported…I think a lot of people are drawn to the uniqueness of what we do, and that they are helping a cause,” she elaborated.

Instead of paying set prices, INsideOUT Salon clients make suggested donations – set below area median prices – for particular services. Salon staff members are employees, not volunteers, and they hold Idaho licenses. They’re hired based largely on how they fit with the organization. Some have long tenures.

The salon employs four hair stylists, including Maglish, and a nail technician. Maglish is paid through her work as a stylist at the salon, but her work for the broader organization is pro bono. Her husband Mike, who brings experience as a pastor and Christian college administrator, is on the organization’s CEO.

The INsideOUT nonprofit helps trafficking victims and potential victims get the help they need, such as counseling, longer-term housing and guidance to pursue job and educational opportunities.

Early on, when the youths may not be particularly talkative, INsideOUT Salon often plays a critical role.

“A salon is a great place to talk about issues, people’s lives, things that are affecting them,” Maglish said. “It’s healing.”