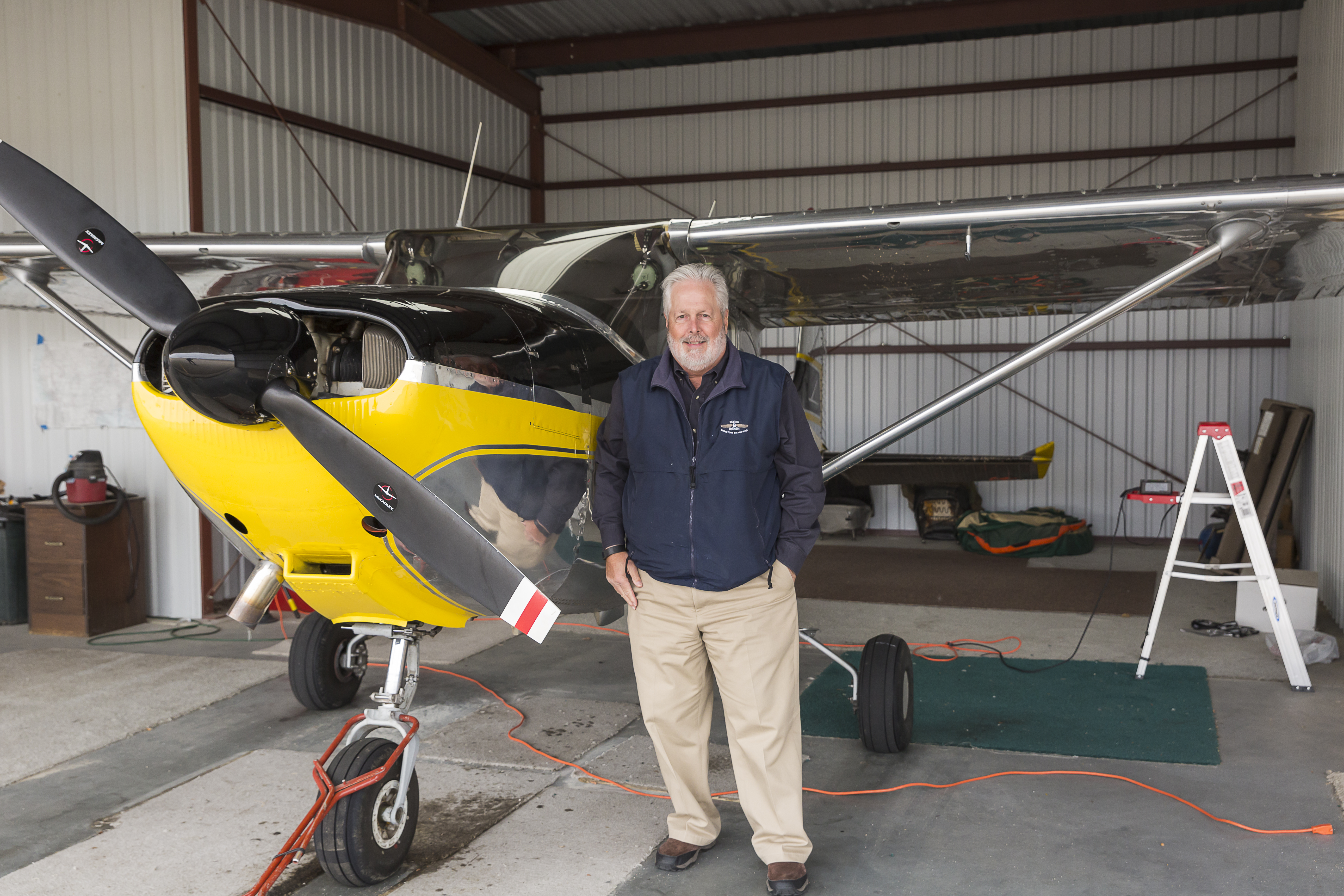 Author Richard Holm, Jr. recalls the origins of the Floating Feather Airport and its owner’s peculiar aviation style in his book Bound for the Backcountry: A History of Idaho’s Remote Airstrips.   Willis M. “Bill” Woods, born December 12, 1901, became an Idaho aviation legend by teaching aspiring military and private pilots, hauling people and cargo into the backcountry, and learning from his mistakes.  It was his frequent poor landings, however, during which he described he “floated down the runway like a feather” during a 1969 newspaper interview that inspired the naming of the airport.

He was eccentric, usually flying with two wire-haired terriers and eventually embracing the “Old Man of the Mountains” title, Holm said in an interview.

Woods had accidents in the backcountry – estimates range from 17 to 23, according to Holm – once making a log raft to transport an entire airplane down the Middle Fork Salmon River to Indian Creek Airstrip for repairs and another time wrecking at Root Ranch in the Salmon River Mountains. The latter incident prompted him to write “The Do’s and Don’ts of Mountain Flying” for inclusion with Idaho aeronautics maps.

“Most pilots tend to be reserved about their accidents and incidents, but Bill Woods wanted other pilots to learn from his mistakes and his experiences,” Holm said.

rthur Hart, in Life in Eagle, Idaho, wrote that Woods trained pilots under the Civilian Pilot Training program, “a federal effort to have enough fliers ready should America be dragged into the European War, then in its second year.”

The dirt runway airport saw property damaged and lives lost in 1944, when a bomber crashed while attempting an emergency landing, Holm wrote.

In Eagle, Woods was farther from backcountry action that was seen at hubs like McCall, Grangeville and Missoula but was closer to many people who wanted to take his-affordable flying lessons. He also was close to his Garden City vending and jukebox enterprise.

His Staggerwing Beech biplane was faster than most backcountry pilots’ planes – boosting his financial prospects as well as his accident risk, as it wasn’t designed for short takeoffs and landings, Holm said.

Idaho Aviation Hall of Fame President Joe Corlett said Woods, inducted in 2000, was one of the “old stick-and-rudder guys” who relied on “airmanship” instead of technology. “They were very adept at making the airplane do what they wanted it to do.”

“The Floating Feather Airport had an interesting history and was associated with the City of Eagle for years,” longtime resident Weldon Fisher noted in handwritten recollections filed at Eagle Historical Museum. A factor in an ultimate decline in traffic was greater demand for improved runways as aircraft were replaced, he wrote.

Woods liquidated much of his inventory around 1972, Holm wrote, two years prior to his death on March 23, 1974.

Link to “If I Could Write” (author: Bill Woods) pcnohow.us/mt/helens