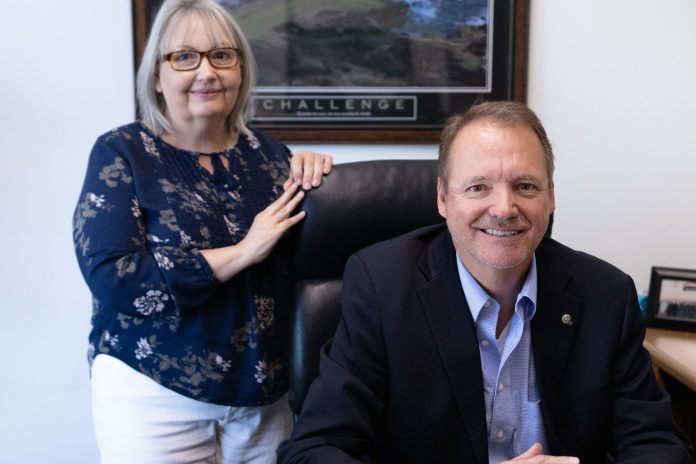 Insurance Broker Pete Dover Gives Back to the Eagle Community

Pete Dover has one major piece of advice for you: assess your life – in every way.

Dover’s American Family Insurance agency in Eagle is celebrating its 20th birthday. It was important to Dover that readers know how grateful he is to his many clients and to his incredible staff – particularly Joy – for not only their amazing customer service, but most importantly, for holding down the fort while he works with many community organizations, including the Eagle Kiwanis Club, The Eagle Chamber of Commerce and the Eagle Library board. He was instrumental in getting Sunday hours at the Eagle library, so that people would have more access to all the resources it has to offer. “For working families, this was critical.”

Dover prides himself in the way he is able to manage every aspect of his life in order to live to the fullest and give back to the Eagle community.

Pete Dover’s parents were from the UK. His mother grew up in the country and his father grew up in London and was evacuated during the WWII blitz. The Dover family eventually moved to Canada, where Dover’s father had taken a banking position.  His mother moved to Tasmania (a six week journey by ship), back to the UK, and eventually landed in Canada, where she met Pete’s father at a YMCA dance and married him shortly thereafter. The couple moved from Canada to La Canada in California. Similar names, vastly different cultures. Dover’s mother was an RN. One of Dover’s favorite childhood memories is of his mother regaling him with stories of having cared for Elizabeth Taylor after the family had moved to Southern California. “She was married to Richard Burton at the time, and when her stint was done, the couple gave her a beautiful angora sweater. Years later, when my mother’s dementia was in an advanced state, she would still talk about the angora sweater that Elizabeth Taylor and Richard Burton gave her.” After 12 years, the family relocated to the Bay Area which Pete calls home.

One of Dover’s jobs had him travelling to two to four cities per week. During one of these weeks, Dover serendipitously took an extra leg of a puddle jumper trip between two California cities. It was on that little jaunt that he met his wife, Twila. Pete embraced several careers, learning along the way, and Twila pursued her passion: working as a physical therapist.

September 11, 2001 was an auspicious day for all of us, but it was even more so for Pete Dover and his family.  Because of company downsizing, he learned on this already awful day that he had lost his job.  His personal life was faced with having to think through his family’s future. It turned out to be a blessing in disguise.

Dover’s wife Twila was raised in North Dakota, and he was raised in California. Though many components needed to be thought through, one thing was certain: they wanted the best place to raise their young children. After intense research, the couple decided to move to Eagle. That was twenty years ago, and the Dovers have not looked back since.

Pete Dover is as committed to his work with community organizations, as he is to his clients, which says a lot. His clients all have his cell phone number, and he is available 24/7 to help people navigate a crisis. His American Family Agency has one of the highest retention rates in Idaho. Though he works with many community organizations, it is working with Kiwanis projects that really touched his heart.  “While we make an impact on all aspects of the community, the joy I get when I help under-served children is incomparable,” states Dover.

Not only does Dover truly care about his clients, but he cares about everyone’s insurance needs. You do not need to be an existing client for him to do an in-depth analysis of your current insurance coverage. “My job is to evaluate, educate and provide guidance so that you can be as insured as you want to be. You will always get the whole body from us, all the pieces and parts that are available, and their corresponding costs.” It’s no secret that the cost of just about everything has gone up substantially, and your current insurance may not have kept up. If your home’s value has gone up 40% in the past few years, would your insurance cover replacement costs? “This is the number 1 question we get lately.”

When I asked what one of the most common insurance questions is, Dover replied: “Car rental insurance. The car rental companies are really good at putting fear into you. They will especially tell you that your insurance does not cover ‘loss of use’ if the rental car has to spend time in the shop. They would have to prove that there were no other cars available to rent before that argument would fly. You don’t need additional car rental insurance, as long as you have liability and Comprehensive/Collision coverages.” Dover leans in across the table: “There is one exception that people should know about. There’s a car rental platform called Turo. It is a peer-to-peer carsharing company based in San Francisco. The company allows private car owners to rent out their vehicles via an online and mobile interface in over 56 countries. Some insurance companies will not cover Turo rentals, so be sure to check with your insurance agent before you rent through Turo.”

“Education is everything,” states Dover, “Take the time to really understand your insurance coverage and see if it meets your needs. The old adage of ‘better safe than sorry’ could not be more true when it comes to insurance. Feel free to dop in – I’ll look forward to meeting you!”.

Previous article
Idaho2Fly, Cancer Support for Men
Next article
Vineyards in the Foothills