Close Up: The Finest Framer 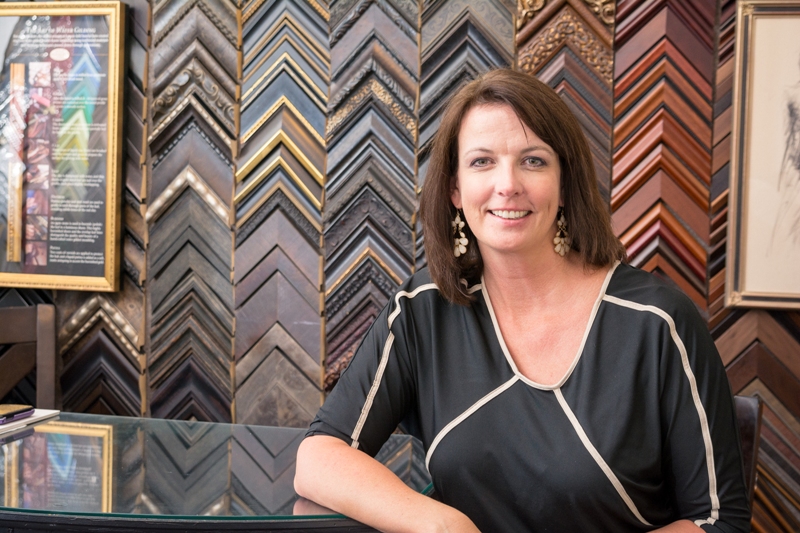 In 1990, a frame maker taught Idaho native Meg Glasgow the European style of framing while she was living in Portugal. Nine years later, Glasgow founded Finer Frames in Meridian and last fall moved her business to Eagle so she could be closer to home. An Eagle resident for the past 8 years, Glasgow says, “Eagle has a distinct sense of place that is unique in the valley. I love that! The river, character and people make it a great place to live.”

Finer Frames specializes in preservation framing that employs museum quality products and techniques designed to protect art and artifacts of all kinds. Finer Frames constructs shadowboxes for 3-D items, such as memorabilia for the Warhawk Air Museum and jerseys for the Idaho Steelheads. Glasgow also provides custom picture framing, art restoration and installation services and art consulting for businesses.

“People bring me the most interesting items to frame and I get to be creative to design a frame that will safely protect the work while complimenting the environment where it hangs. My challenge is to showcase the art, protect it and make it look great. After 20+ years of framing, just when I’ve thought I’ve seen it all, today a client brings me a WWII Japanese war artifact signed by dozens of famous fighter pilots. It’s always something new… I have a great job!”

Glasgow is an innovator and designer in her industry, and recently entered a new “Design Star” competition. Frame manufacturer Larson Juhl partnered with HGTV to create a picture framing competition held in Las Vegas last January. The competitors were assigned a frame style and a bold black and white graphic image designed by Thomas Paul. Glasgow’s entry won the first award for Best Frame Design. “Then to my surprise,” Glasgow shares, “my shop won the Grand Champion award for design, business practices, and marketing.”

Glasgow was then invited to create her own frame collection, which will be available at framing retailers throughout the United States next January. Glasgow began working with the design team at Larson Juhl, the world’s largest picture frame manufacturer, through Skype conference meetings. After several months, she was invited to collaborate in person at Larson Juhl’s headquarters in Norcross, Georgia, just outside of Atlanta. “The design room was hidden in a corner of the third floor, protected by a high security door. Behind the door was a large room with thousands of frames – it sparkled with glitz and glamour. It was so exciting to be brought into their secret inner circle.”

“It’s been a thrill to learn about the complexities of manufacturing on such a large scale. We have to create a product that satisfies a consumer demand, is of dependable and consistent quality for the frame builders and remains profitable to produce. It’s much more complicated than I imagined, with a lot at stake. I really want to get it right!”
Winning the Design Star: Grand Champion 2013 was not the only recognition Glasgow has received. She has also been recognized both nationally and locally with Décor’s Top 100 Art & Framing Retailers Award 2003; Décor Magazine: Footsteps Award for Marketing; Woman of the Year, Meridian 2005; Idaho Woman Entrepreneur of the Year Nominee 2004; and Small Business of the Year 2002.

An Eagle Chamber of Commerce member, Glasgow agonized over the decision to go into business for herself. “It was terrifying, but when I finally made the leap I never looked back. Despite the high number of competitors, I always knew there would be room for me at the top of the list, and that is what I set out to do: be the best! They say the only thing more over-rated than owning your own business is natural childbirth. After having experienced both… I think entrepreneurship is tougher!”

When asked if she has advice for other business owners Glasgow answered, “I’ll share my favorite quote from Steve Martin, ‘Be so good they can’t ignore you’.”

Adding a gallery space was a big factor in choosing to move Finer Frames to Eagle. “I love being able to showcase the amazing talent we have in the valley. Their creativity feeds the soul and it’s great to bring that to Eagle. I have a growing passion for public art. Hopefully there will be opportunities for more art in Eagle. Stay tuned…”