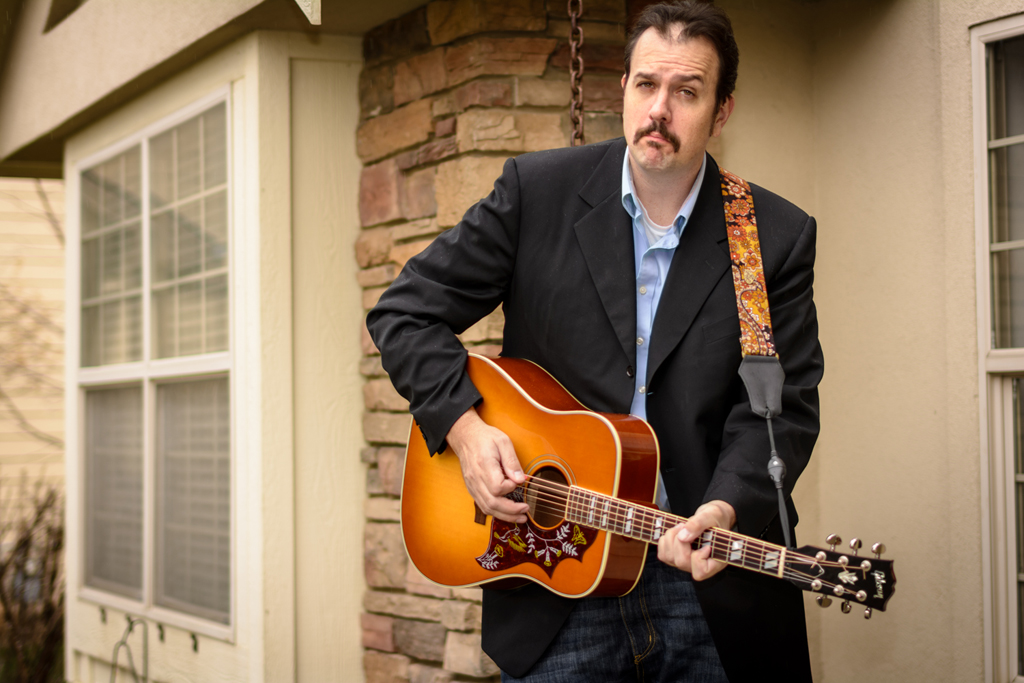 This was one of the questions I had for lawyer, musician, father, husband, corporate trainer and writer, Dave Butler. You see, when I first read the description of Butler’s book “City of the Saints,” it declared itself as “a four-part gonzo action steampunk adventure tale.” Even if I never read anything more about the book or the man I would have bought the book on the spot just because of that spectacular description. I then skimmed his website for an account of the next book, “Rock Band Fights Evil,” which is described as “an action-horror pulp fiction serial.” I don’t even read this genre, but with the cast of characters Butler has dreamed up, each an outstanding character study in their own right, I wanted to read it all.

This is a writer who is having fun.

Butler may wear a lot of hats, but since 2010 his life-long dream to be a writer has spilled forth. And the path Butler has traveled to this point has been interesting, to say the least.
When I met with Butler there was nothing suspicious about him—no clockwork tattoos, no third eye or mysterious blue box parked in plain site—nothing gave a hint to the Fantasy and Science Fiction writer lurking within.

Butler is easy going, quick witted and down to earth. And he loves what he does. Those elements were evident the moment we began talking. When asked when he knew he wanted to write, Butler quickly replied, “since I was a kid; from the moment I read Tolkien’s “Lord of the Rings.” Knowing that the life of a writer isn’t easy, he didn’t immediately follow that dream. Instead, he did what any smart person does: “go to law school,” he says with a laugh. Upon graduation he worked in securities law moving from London to New York, and finally to Idaho.

In 2010, Butler moved writing to the forefront of his life and began penning his works as D.J. Butler. If you visit his website, www.davidjohnbutler.com, you’ll see he has a massive amount of work that he’s both produced and self-published (15 books and counting). Yes, he does write that fast. And yes, he does all the editing, publishing and marketing himself. The only element of his books that he contracts out is the cover art, which is done by Carter Reid and Nathan Shumate.

Initially, when Butler wrote “City of the Saints” he wasn’t sure if it would have an audience, which was one of the reasons he looked into the burgeoning platform of e-book publication. But, whatever misgivings Butler had toward “City of the Saints,” both the industry and fans alike have embraced the book as their own. In fact, “City of the Saints” is a finalist for the 2012 Whitney Awards in the ‘Speculative Fiction’ category.

Butler has also published the “Rock Band Fights Evil” series, novella-length adventures released individually as e-books. He has seven books published of the twelve that will eventually complete the series. The reviews drool over “Rock Band’s” pulp-fiction feel, crazy worlds, and action-packed adventure, not to mention Butler’s “highly entertaining” prose.

When I asked Butler what he meant when he described his book as “gonzo steampunk”. He said ‘gonzo’ is, essentially, “over the top” and ‘steampunk’ a “modern reimagining of Victorian science fiction.” His re-imaginings are obviously hitting a chord with sci-fi fans. He has sat on panels at local fandom conventions and, if achieving some modicum of fame as a writer isn’t enough, his Filk Music (not a typo) has been recognized as well.

What is Filk Music? At an early Sci-Fi convention, there was supposed to be an hour of Folk Music. But typo in the program gave way to ‘Filk Music’, and a sub-sub culture of sci-fi fandom was born.

What is next for Butler? He is working on a young adult legal thriller, which he describes as “John Grisham for kids.” He would also like to record the audio books for his “Rock Band” series; reading the books himself and adding musical breaks between the chapters—music that he will write and perform himself. Until then, Butler’s books can be purchased at www.davidjohnbutler.com, where you can also find links to his endlessly entertaining Filk music videos as well.