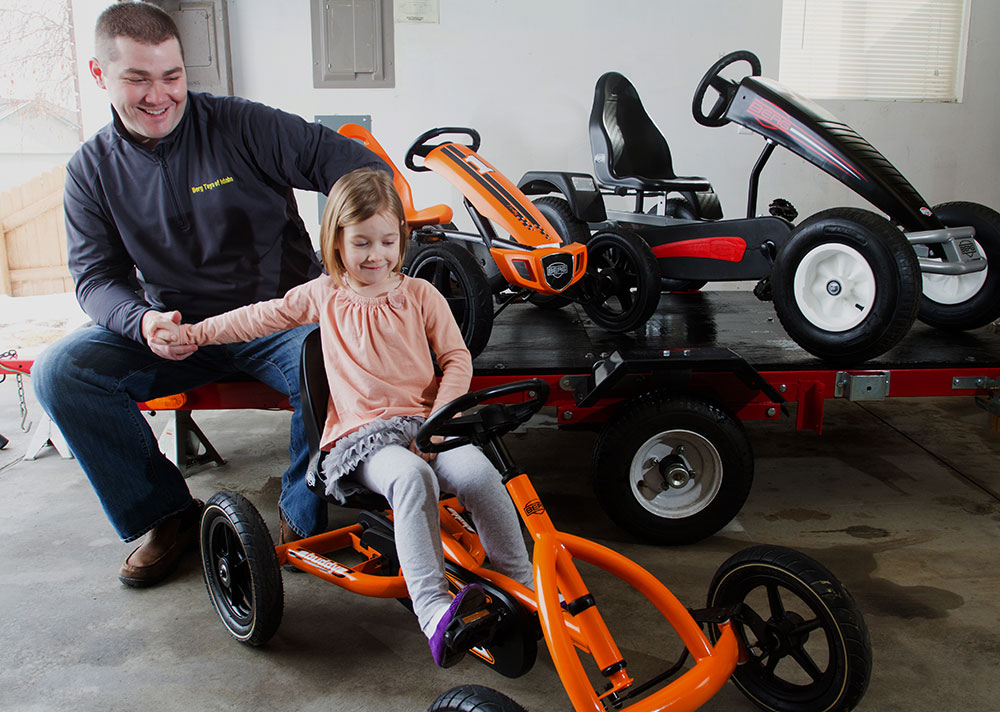 Local resident Scott Graf shares his connection and love for the Berg Go-kart.


Scott Graf says this story starts about a year ago when his then 4 year old daughter, Camryn, became enamored with a friend’s pedal go-kart. The friend’s family soon offered to let the Grafs borrow the toy.

“We had it for two months,” Scott says. “Camryn rode it almost every day. And when it was time to return it, she was pretty bummed. She definitely missed it.”

Scott and his wife, Kelly, waited just four days before deciding it was time to purchase their own go-kart. But they quickly figured out there was no local outlet that sold the toys. The company that makes the karts, Berg, is based in the Netherlands but is relatively new to the U.S. The family ended up ordering from a company in Kentucky.

“And when it came, I had to assemble it,” Scott says. “But that was sort of a blessing in disguise. I figured out that this was the best-built toy I’d ever seen.”

Scott and Camryn then spent the summer together riding around their Eagle neighborhood while Kelly tended to the family’s newborn son, Gus. Scott says it was fantastic exercise and a great way to get out of the house.

“We’d ride two or three miles at a time,” he says. “And when we’d get home, I’d tell Kelly about the all the people driving by who’d point and smile at the kart, or the kids who’d ask where we got it. We knew the karts were great but it was obvious they were catching other people’s attention, too.”

That got the couple thinking: Why not become Idaho’s first Berg dealer and connect other families in the area with the same kind of experience they were enjoying?

Scott contacted Berg’s North American headquarters in Pennsylvania. Within a few weeks, he was building a website, an online store and ordering several demo karts. Berg Toys of Idaho was up and running.

“We never thought of ourselves as business people,” Scott laughs. “But we knew how we reacted to the toys. And with all the young families and the pedaling culture here, we figured there had to be others who’d be just as excited to learn about Berg Toys. So we decided to give it a shot.”

Berg’s line of karts are available for ages 3 to adult. Scott says recent customers have included parents, grandparents and even driver’s education teachers who plan to use the toys as a way to teach students about the dangers of drunk driving. Berg has partnered with companies like Jeep, Ferrari and John Deere to offer specialty karts. Berg Toys of Idaho sells nationwide and offers free assembly and delivery to Treasure Valley customers.