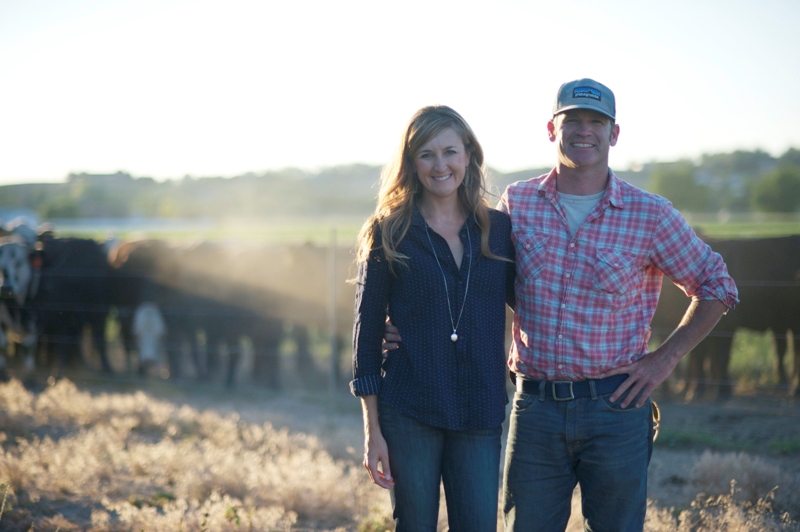 At 24 West Ranch, contented cattle graze on lush fields of mixed grasses and alfalfa, and acres of certified-organic vegetables and flowers waft in the breeze

Everyone who has lived in the Treasure Valley over the years has inevitably watched irreplaceable farmland gobbled up to become spiffy new subdivisions. The opposite scenario has played out in Star, where Jill and Joe Waterson and family have turned an abandoned, nearly 200-acre would-be subdivision into an organic ranch and farm.

The Waterson family has a rich history in Idaho agriculture. Joe grew up farming and ranching in Owyhee County and traces his farming background to family in Tennessee. The name of the ranch is the story of the Watersons’ arrival here. “The family has been in the valley since 1924,” Joe said. “My grandfather [also named Joe] wanted to come out west, so he hoboed out on a rail car to Nampa, then he walked to Emmet and got a job as a sheepherder for Andy Little.”

His grandfather saved enough to buy his own farm in Homedale, and Joe’s dad, Bill, kept farming and ranching the property. But Joe, who had been working in technology since shortly after high school, didn’t want any part of the farm until about four years ago. His dad was still running about 125 head of cattle, and Joe and family decided to partner with him.

“We wanted to be closer to the Boise market, and found a bank-owned property in Star,” Joe said.

The site, he said, had been farmed and ranched for about 100 years before investors started to develop it.
Joe and family bought the ground in 2010, “at the bottom of the market,” he said. “We spent almost a full year just putting the land back into agriculture. The nice thing was the ground had been fallow for five years, and there hadn’t been herbicides, pesticides or artificial fertilizers applied to the ground.”

Prior to Joe and family taking on the ranching duties, 24 West’s cattle had been taken to feed lots after being weaned at 10 months. Typically, weaned cattle are moved to feed lots and fed “a number of concoctions” including grain, corn and alfalfa, sometimes given antibiotics and growth hormones to speed up the process to 14-15 months of age until market, said Joe.

“But we wanted to focus on local, and on organic and grass-fed, all-natural beef,” said Joe.

At 24 West, weaned cattle now go directly to grass pastures, from about May-November. Those that aren’t quite finished get alfalfa hay from the ranch during the winter. The process takes about 18-24 months to finish the cattle for market.

“You end up with a better, healthier, cleaner product, and we feel from an animal humane and husbandry standpoint that our animals are given the best environment possible,” said Joe.

The Waterson’s planted all non-GMO organic seed for alfalfa, grass pastures and about 12 acres of organic produce. “One of the primary driving factors behind us was to prove not only to ourselves, but everyone else, that you can run a viable agricultural business being natural, organic and sustainable,” he said. Beef is sold retail to end users, in whole, half, quarter portions and a 40-pound variety pack. The cattle operation is their main revenue generator, while the produce is mainly a labor of love, he said.

The Waterson’s also invested heavily in new irrigation, including three pressurized wheel lines to help with soil erosion and installed a drip system, “which is extremely efficient for water use on our produce field,” said Joe. They drilled a fresh-water well for the produce so they wouldn’t be using ditch water that could be contaminated by upstream farms and ranches possibly using herbicides, pesticides and other chemicals.

On the produce side, the Watersons grow zucchini, squash, cucumber tomatoes, peppers, sweet corn, cantaloupe, onions, beets and pumpkins. Eggplant and fresh-cut flowers round out the plantings. Produce, including flowers, is wholesaled to Whole Foods and the Boise Co-op. Later this year, the Watersons plan to offer produce on the farm, “especially when the sweet corn hits,” he said.