In honor of Eagle Magazine’s 15th Year Celebration, we list the fifteen top historical events in Eagle leading up to Eagle’s incorporation as a city in 1971.

In 1863, Truman Coe Caitlin and Joseph Woods homestead on Eagle Island, becoming Eagle’s first documented settlers. Caitlin took up “squatter’s claim” on 160 acres before finally buying his land from the United States, while Joseph Woods claimed 103 acres from the government under the Homesteader’s Act of 1862.

In 1870, Polete Mace makes a home on Eagle Island, going on to be honored and respected by his neighbors for his hard work of bringing life to the town. He continued his work for the community by becoming Vice-President for the first bank in Eagle, and one of the most prosperous men in the area.

In 1877, “Town Father” Thomas Aikens arrives in Eagle and purchases 200 acres on Eagle Island where he builds a homestead. Aikens quickly amasses land and becomes a shrewd businessman, but is also known for his generosity. He proceeds to donate several small parcels of land to the Baptist Church and a larger parcel for the town community center. These donations gave a much-needed kick-start to the small town of Eagle. 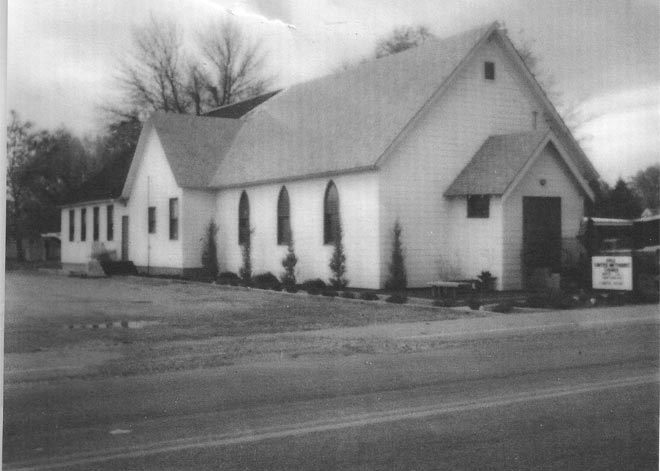 In 1889, area Baptists and Methodists organize Eagle’s first churches. The Methodists built a small church sanctuary on Hill Road, just south of the intersection of Pierce Park Lane, while the Baptists began their own church services at the Cox/Green Meadow Schoolhouse located on Highway 44. Seven years later in 1896, the Baptists gathered enough funds from the parishioners to build their own church. This attractive Gothic Revival-style sanctuary was built and then moved to its present-day location on Eagle Rd.

In 1893, Clyde Snider opens a blacksmith shop on the site that would become the town of Eagle, establishing the very first business in the community. The blacksmith provides several essential services to not just local farmers, but everyone. A horse can only be ridden so far without shoes, wagon axels will need to be repaired, and tools cost money; less expensive to have them fixed than order new ones. In 1915, The Polk Directory lists four different blacksmith shops in Eagle, showing their services were clearly indispensable.

In 1895, John R. Carpenter retires as a stagecoach driver in the newly formed town of Eagle; he quickly becomes established as one of the town’s builders. Buying 90 acres of land on the Northside of Old State street, he donated a plot of land for the Odd Fellows Lodge on the corner of Eagle and State. Teaming up with Thomas Aikens, Carpenter worked closely with town planners to develop the small community. John Carpenter lived out the rest of his days in Eagle, succumbing after a long illness, at the age of 90.

In 1900, Enterprise School becomes the first school in Eagle. Area parents had to petition the Ada County Commissioners to form the new Enterprise School District #12, as there were a few in the community who didn’t see the need for school and refused to pay the tax for the new district. With the new school close to the center of town, it would save the children from having to walk the 3 miles to Green Meadow School for their education. By 1909, Enterprise School was overcrowded and a new brick Eagle Elementary was constructed just north of town.

In 1907, The Boise Valley Interurban comes to Eagle. The Interurban began operations in 1890 with an initial Main Street track in Boise. During 1910, the trolley company decided to extend its lines from Boise’s North End, onward to Eagle, Star, and Middleton. Eventually, the Boise Valley Loop formed; a total of 66 miles of track were laid. The trolley not only allowed people daily transportation; those who lived along the “loop” enjoyed the benefits of electricity well before other valley residents. Unfortunately, with the automobile becoming a more common-place, the Interurban fell into bankruptcy and closed on May 18th, 1928.

In 1908, The first Post Office in Eagle begins mail service. The Interurban began delivering mail to Eagle in 1907, usually on the first streetcar out of Boise each morning. Eagle resident Louis E. Diehl takes up the task of Postmaster and begins running th

e first Post Office from boxes in his general store. Dielh held his position of Postmaster for the next 20 years, until 1927 when he was replaced by Wilbur J. Selbey.

On August 11, 1924, amateur bank robbers, Oliver “Derby” Jones and Chet Langer entered the Eagle Bank shortly after it opened and robbed the bank. They had left Jones’ girlfriend, Dora Douglass, waiting in a “getaway” taxicab, with the driver, Hank Endsley. After giving chase, a few hours later, all three robbers were arrested in Boise. Langer admitted his part in the robbery and identified Jones and Douglass as the other two participants. Chet Langer pleads guilty and received a 6-16 year sentence, while Derby Jones plead guilty and received 10-20 years in the Idaho State Penitentiary. Dora Douglass turned state’s evidence and was released on a $1,000 bond. During police questioning, it was determined that the driver, Hank Endsley, was an accessory to the crime. He pleads guilty and gets probation.

In 1929, The State Of Idaho purchases the Truman Caitlin ranch on Eagle Island, making it the new site of the 552-acre Eagle Island Honor Farm. An honor farm is defined as a functional farm, and usually part of a larger correctional facility, where prisoners are put to use working the farm as part of their sentence. The Eagle Island Honor farm opened in October of 1929, with just a handful of trustees, but over the next 48 years, thousands of prisoners came and went. In March of 1973, the Eagle Island Honor Farm came to an end. The brand-new Idaho State Correction Institution had opened, and the inmates were moved after riots and general lack of living quarters led to the closing of the Old Penn.

In 1940, Bill Woods purchases 120 acres just east of Eagle, making it the future site for the Floating Feather Airport; Eagle’s first and only airport. Woods built his own airfield and hangers for use by fellow pilots. The now built-over airport was located off of Horseshoe Bend Road and has now bee 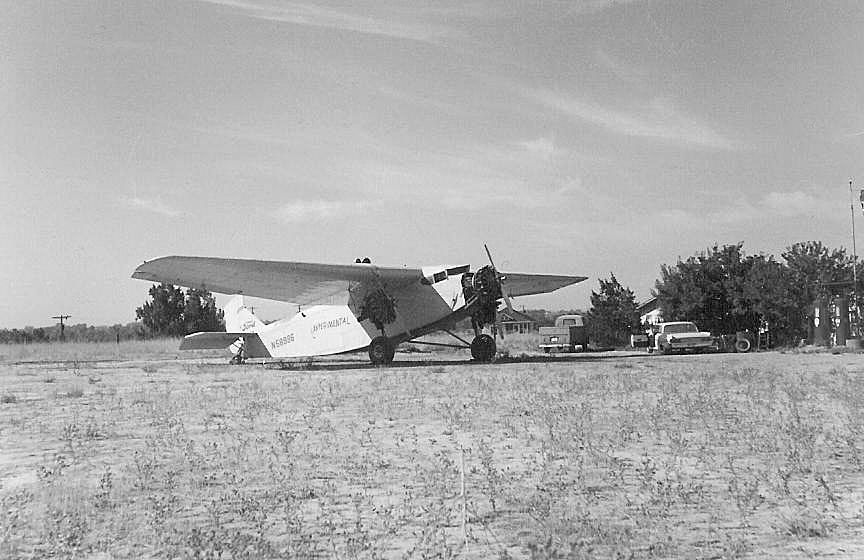 n subdivided into one-acre parcels. After Woods completed his airfield, he immediately began training pilots for the Civilian Pilot Training Program. A Federal program that trained fliers to be ready should America be pulled into World War II, which happened 2 years later.   Floating Feather Airport went on for some 25 years. It was in 1972, just two years before his death, that Bill Woods would liquidate his assets and close down his beloved airstrip. Floating Feather sat abandoned until 1994, when the Eagle City Council annexed the land into the city, forever closing that chapter of history. The Eagle Merc catches fire during a 4th of July celebration in 1947; burning the back half of the building and threatening the other buildings on Main Street. At that time, the City of Eagle had no fire equipment except metal drums of water kept in the alley and a bucket brigade. This near-disaster led directly to the formation of the Eagle Fire District and Volunteer Fire Department in 1950.

The Eagle Merc catches fire during a 4th of July celebration in 1947; burning the back half of the building and threatening the other buildings on Main Street. At that time, the City of Eagle had no fire equipment except metal drums of water kept in the alley and a bucket brigade. This near-disaster led directly to the formation of the Eagle Fire District and Volunteer Fire Department in 1950.

In 1953, Reid Merrill buys 1,000 laying hens and begins one of the most iconic industries in the Treasure Valley. Merrill’s Egg Farm began life with one remodeled barn and one 30’ by 80’ chicken house that Merrill built himself. For its first 14 years, the business was run by Reid and his family. Then, in 1966, Farrin Farnworth was taken in as a partner and the egg farm became Merrill Egg Farm, Inc. 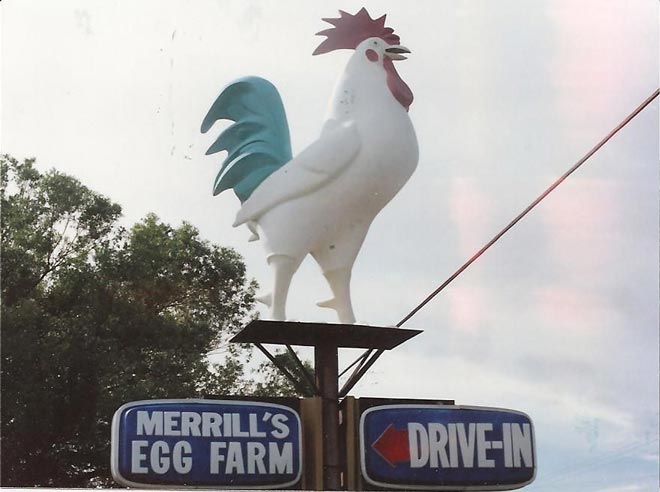 At its peak, the operation was made up of 225,000 to 250,000 laying hens, five laying houses, a large processing center, numerous chick pens, and a salesroom. However, on November 30, 1989, tragedy struck. An electrical malfunction caused a fire to break out in one of the five laying houses. The Merrill’s lost 90% of their hens, as well as two-thirds of the farming complex.

In 1963, The Eagle Public Library opens as a small volunteer library operated by Ruth & Norval Ostroot. The library is managed out of a private home until 1968 when it is established in a rented building. During that year, the future of the Eagle Library is set in motion, as the Ada County Commissioners approve the Eagle Library District. A few months later, in 1969, permanent home is secured for the library. The City of Eagle purchases a building at 67 E. State Street to house the library and remained in this building for 30 years. In 1974, The City of Eagle adopts the financial responsibility for the library, and our city library is born. This action ensures that the community will always have a public library, one more step in the eventual success of the City of Eagle.