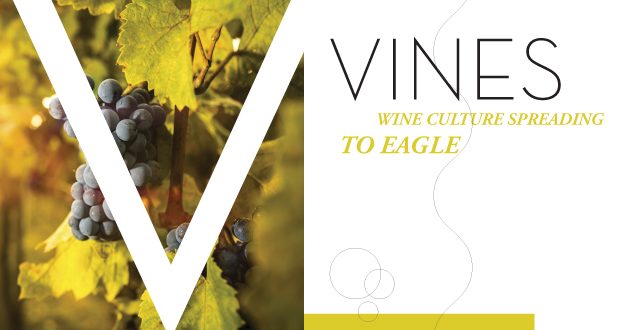 On November 25, 2015, the Eagle Foothills AVA was approved by the Tobacco Tax Bureau (TTB) and the State of Idaho welcomed its first unique AVA, solely within Idaho boundaries. An American Viticulture Area (AVA) is used by wine enthusiasts to identify a sense of place. It brands a wine region to bring acclaim to the area for the quality.

An AVA must have a unique terroir—the combination of climate, soil composition, and slope that separates it from surrounding areas. Part of designating an AVA is proving name history and identifiability. When Martha Cunningham started writing the Eagle Foothills AVA three and a half years ago, she realized that the City of Eagle had already identified the Eagle Foothills as an area of special interest.

The approval of the AVA comes at an important time for Idaho wine. Historically, Idaho wine has not gained national recognition, leaving many people unaware of its presence. But over the past several years, Eagle has experienced a renewal of its wine culture, and the city is working to support the local wine economy.

An Eagle City Council member and the owner of local cafe Wild West, Naomi Preston, pointed out the impact that the Eagle Foothills AVA could have on Eagle’s economy using Walla Walla, Washington as an example.

The city previously known for its sweet onions has experienced a huge surge in wine tourism since becoming a world renowned grape growing area and AVA. Walla Walla’s wine industry has also had a secondary impact on their economy, thanks to increased business in restaurants and hotels.

Preston believes the same thing could happen for Eagle and said that the wine industry in Walla Walla has brought tens of millions of dollars to the town.

“When you look at what’s happening in Walla Walla, that’s a model for what we could have here in Eagle. I would like to see Eagle City Council identify the Eagle Foothills AVA as one of our top priorities in terms of economic development.” In order to further support the Idaho Wine Industry, Preston would like to see Eagle create an environment where wine-related industries want to come and build their businesses.

“Part of our plan could be to encourage wine- related business.”

2016 is a big year for development in the City of Eagle; the city comprehensive plan is being rewritten.

In March 2016, The City of Eagle Park and Recreation Department saw a lot of excitement in the city of Eagle at a wine event they hosted. They offered their first wine and food pairing course at local restaurant Bella Aquila, which featured wines from 3 Horse Ranch Vineyards. They also offered information about the new AVA designation and how participants could support this new industry.

In an email, Caitlin Straubinger, Recreation Coordinator, said that based on their registration numbers and the feedback that they received, it was apparent that many people in the Eagle community were excited about the burgeoning wine industry. To support this, they will be offering additional wine-related classes in the future.

Dave Faulk, the owner of Porterhouse Market and Grit restaurant in Eagle, has always been a supporter of local products because of their connection to the local economy. Faulk said that he has seen a change in Idaho wines since opening Porterhouse in 2000; they are getting better and better. Faulk said that someone who tried an Idaho wine ten or twenty years ago needs to try it again.

“There are a lot of good key players in the area now,” Faulk said.

Tom Holloway, the store director of Albertsons in Eagle says that he has also noticed increased interest in local wine at his store.

“There’s been more of a buzz about 3 Horse over the past year and a half… People are talking about it [local wine] more than ever before, and we’re seeing it here in the marketplace.”

Even as a national chain, Albertsons tries to feature local products as one of their core values. Holloway says the selection of products they offer depends on the store’s demographic. He said that he considers the Eagle Albertsons to be a ‘wine store’.

Because the Idaho wine industry is still developing, some buyers at stores or restaurants face a dilemma when bringing in new wines. Especially if the shop does not have a designated wine steward to help their guests make informed purchases, most wines will need to sell themselves by inspiring recognition in consumers. So, many buyers balance their desire to source unique products with the necessity to meet consumer demand.

As the Eagle Foothills AVA’s recognition grows, local consumers have an exciting role to play.