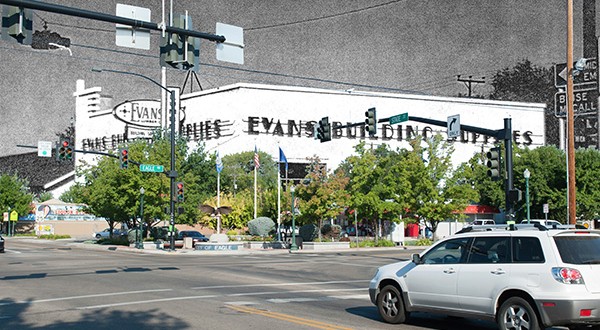 The familiar name of Evans Building Supplies adorns its original location at Eagle and State where the Shell station and Jackson’s now lives. The Evans name moved down the road under new ownership many years back.

The arrow turns green on the signal at the Eagle Rd. and Hwy. 44 bypass.  I’m headed eastbound, turing left to get into downtown for an appointment at the Eagle Historical Museum.  It’s noon and, well, I should have scheduled my meeting for a different time.  With enough cars ahead of me stopped at the signal at E. Plaza Dr., our lane isn’t moving and I’m stuck waiting through another cycle.  Errrrrr!  I try initiating some of the techniques I learned in anger management class, and find myself using the time to think about how different things are in 2014 than when I moved here in the early 1990s.  I’d like to impress you with facts about how there are more cars going through this intersection in a long afternoon today than an entire two weeks back then.  But whatever I tell you would be a lie.  This intersection didn’t even exist then. Eagle wasn’t much more at that point than what it had always been, a sleepy rural outlying community west of Boise.  It began seeing the first surge of development in the previous two decades as Boise became a hotpot for big-city transplants looking for a quieter lifestyle, fewer cars, lower crime and clean air.  Those who wanted horses in the back yard or simply desired a little more land came to Eagle.  Subdivisions had started, too.  Lexington Hills was just being built and it was obvious that Eagle was creating an upscale destiny. The 1960s saw Eagle with as few as 200 hardy folks.  By 1990 there were a “whopping” 3,300.  That’s a big jump percentage wise, but you’d hardly call that a lot of people.  Having come from the San Francisco Bay Area, I feared the move might create too much culture shock if it ended here, so I opted for northwest Boise.  At the risk of sounding like I’m recounting my days during the bronze age, I’ll go on to say that back then my drive would have me encounter six, maybe seven cars coming in the opposing direction from my home near Glenwood and State to Star Rd., on to Hwy 20-26 to Franklin and then south to my office near I-84 in Nampa, some 20 miles.  Yes, I said six to seven as in…6 to 7.  Orville Jackson’s was still a general store.  Eagle Rd. was two lanes along its entire length through Meridian and south to Kuna Mora Rd.  And the bypass that we are so familiar with it that seems like it’s always been here, wasn’t even on the drawing board.

So, enough of my rambling, let’s talk about what this feature is about.  Many of you, I’m sure, are familiar with those displays where someone has obtained some old photos of an area, gone out with a camera and found the spots where they were made and “rephotographed” the scenes and the changes that have occurred.  It’s fun to do, more fun to look at, and your local Eagle Historical Museum has some terrific examples if you’re ever inclined to check them out (RECOMMENDATION ALERT: definitely do this, the museum is wonderful). Onions were a huge cash crop in Eagle and remain so in the Treasure Valley to this day. When it’s time to retire selling the land to make way for new homes is less work and more profitable.

After slogging my way through the midday rush, I finally got to the museum where Alana Dunn, Museum Coordinator, assisted me in researching old photographs from the archive for use in this article.  I’m glad I set aside the afternoon for this because not only is there a pretty large stash of material, but it’s a lot of fun to look at and ponder what it was like in the “early days”.  “What are you looking for”, asked Alana “maybe I can help you find it”.  I stared vacantly at her, and shrugged, offering that I’d know it when I saw it.  I really did just want to come in and look at what was available and think about it compared to what I know things to be today.  After a couple hours or so I went away with about 15 photocopied pages of possible shots and started driving to the places referred to in the picture descriptions.

My treasure hunt took me all over the city limits and then some, from Beacon Light to the Boise River, and from Hwy 55 to Palmer Ln.  I hadn’t had a reason to be in some of these areas for several years and was amazed to see the amount of residential development.  There are still many old barns, out buildings and the occasional farmhouse from yesteryear standing firmly against the rising tide of progress.  A few are nestled right between new housing tracts and, while making for some compelling photographs on their own, didn’t work for me here because I couldn’t find an “old” photo of those particular houses.  What I did find, and the results that you see on these pages, are some wonderful contrasts and familiar settings that provide for some intriguing pictures.

I made a lot of photographs on my two trips through Eagle in search of “rephotographs”.  Back at my studio, I went through them while alternately leafing through the shots from the museum, thinking about creative ways to put them together that would be educational as well as interesting to look at.  As I considered my options I remembered some pictures Alana Dunn had shown me; images by San Francisco photographer Shawn Clover and by her husband, Andrew Dunn who has some work currently hanging at the Eagle Idaho Pizza Company location.  Rather than the usual side-by-side, then-and-now presentation, the images are blended together, color and black & white, into one image that moves your eye back and forth and challenges the viewer to figure out which is old and what is new.  A quick refresher on some basic Photoshop skills and I was off and running, erasing here, enhancing there and adjusting various elements to bring what you see here.  I hope you have as much fun looking at them as I did making them!

One last observation I’d like to make is this; a tip of my hat to city planners because, despite the significant build-out that has gone on especially in the last 10-12 years, Eagle remains the charming, rural community that caught my eye when I moved here.  Another special note is this plea to you readers. If you or your family are long-time residents of Eagle, I urge you to dig out your old photos and give them a look.  If you come across anything that shows Eagle in its original condition, no matter how silly or insignificant it might seem, please bring it to the attention of the museum or me personally.  I will be happy to assist in making copies and returning the originals to you in the condition you lent them and make sure that your record of those earlier times becomes a valued element of Eagle’s visual history.

The Eagle Historical Museum is located at 67 E. State St. in Eagle., next door to Wild West Bakery.  Hours are 10:00AM to 6:00PM Wednesday through Friday, and Saturdays 12:00PM  to 6:00PM.  Admission is free but donations are accepted.

Previous: 3 Horse Ranch
Next: Eagle – Then and Now 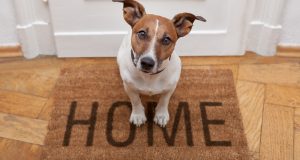