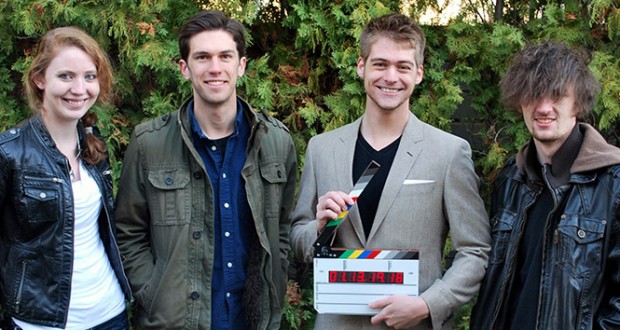 Jake Fullilove’s neighbors have gotten used to seeing crowds of kids making films near his residence in Eagle. Jake became fascinated with film at the tender of age of 12. While attending Meridian Technical Charter High School, a unique charter school with a special focus in technology, he and several friends created a promotional video with computer-generated special effects that the school now shows to visitors.

Currently, Jake is making waves in business and filmmaking communities with the founding of Imperium Cinema.

“Being a filmmaker myself, I noticed a dire need for an industry standard rental service,” shares CEO Jake Fullilove.

“I was never able to pick just one artistic thing to do, which is why I think I initially gravitated to film. Filmmaking is an amalgamation of every artistic medium.”

Jake, whose personal long term-goal is to be a narrative director, produced and directed an independent short film last June called Spring Garden, a psychological thriller about a man suffering from paranoia. The film was produced with the festival circuit in mind.

“We’re not hoping to make any money back on it, which is why I funded it myself,” Jake shared.
“The purpose is to make a visually aesthetically pleasing film. We hope to take it to festivals in America and get our names out there, and get Boise’s name out there.”

One of the friends Jake met while in high school is Dustin Montierth, who designs and creates many of the visual effects in Jake’s projects. Dustin is the Chief Technology Officer of Imperium, and he acts as a visual effects supervisor and creates computer-generated scenes. As a high school student, Dustin was a member of a specialized high school club called SkillsUSA, which promotes youth involvement in a myriad of technological fields. Dustin took first place in the State SkillsUSA competition for 3D Animation and Visualization, a notable achievement. His interest in animation started when he was a child, when he was entranced by the antics of the genie in Disney’s Aladdin. Since exploring animation at the age of 12 in a program called Truespace, he has since strengthened his skills in all facets of visual effects and filmmaking. He has strong production and post-production experience working in roles such as camera operator, 1st assistant camera, and being a digital image technician. He is currently working on visual effects for John Travolta’s film, The Forger, with Chris Ervin of Velocity Ape FX. Dustin also developed key poses and animations for the Disney Junior game Mickey’s Super Adventure.

Kearney Thompson met Jake and Dustin at a local meeting in March of 2013, and two months later worked on a web series Jake directed called 4Hire, a crime thriller. After Kearney and Jake worked together again on Spring Garden and as production assistants on the PBS show Antiques Roadshow last summer, Jake invited Kearney to join Imperium Cinema. As Chief Operating Officer, Kearney is in charge of business operations including the equipment rental and crew staffing sides of Imperium. Kearney has directed several short films and has her own photography business, which you can check out on her Facebook page: Kearney Thompson Photography.

Also on the Imperium team is Chief Financial Officer Brandon Williford. He met Jake at Boise State, and his studies in business there prepared him for his current role at Imperium. Brandon oversees bidding, budget breakdowns, and client proposals for Imperium. Brandon has previously worked as director of photography on Converting the Campus, one of the promos that Jake directed to encourage students to attend a 17 hour dance marathon at BSU to raise funds for the St. Luke’s Children’s Hospital.

Founder/CEO Jake Fullilove sums up his goals for Imperium Cinema as this: “My short-term goal is to form the premiere film rental company in the state, serviceable to any scale of production. Second is to train a crew on all our equipment to fill the crew gap in the Idaho’s film industry. Finally, my goal is to mold a team open-minded to opportunity that stays above the curve of innovation.”

Dustin Montierth shares, “I have always enjoyed movies as entertainment, but I have been more fulfilled in movies that change you as a person. Films that make you aspire to become something better than you are. Those are the films that stick with me and those are the films I want to make.”

Kearney Thompson, COO of Imperium leaves me with this, “I was born in L.A., but it’s easier to find an opportunity to work on a film here in Boise. Now that Imperium has state of the art equipment to rent locally, the visual quality of films made here will put Idaho on the map which gives Idaho filmmakers a reason to celebrate.”

For more information about Imperium at their website, www.imperiumcinema.com, or find them on Facebook by doing a search for “Imperium Cinema”.