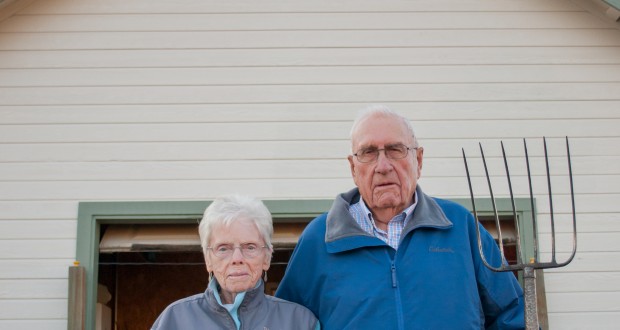 “Don’t worry; she’ll be all right,” Charlotte Campbell’s ailing husband was told by her cousin. These were the reassuring words that John Campbell needed to hear about his beloved wife before he died.

John, a police officer, was admitted to the Whittier, California hospital by a nurse who was the daughter of Dean Garrahan, a retired police officer. The Garrahans were a police family. Though the two never met, Dean’s son Mike was a cadet at the same police department where John Campbell had served. After John’s untimely death, Mike Garrahan actually took John Campbell’s spot on the force, though Charlotte and Dean didn’t realize the coincidence at the time.

After John passed away, Charlotte, a widow in her forties, worked three jobs to pay off medical bills and tried to keep things together for two college-age daughters. With a house and an acre of land to care for, she kept busy. But because money was tight, she reluctantly began selling her high school sweetheart’s “toys.” First went the sports car, and then Charlotte put an ad in the PennySaver to sell the boat.

Meanwhile, Dean Garrahan, a fairly recent widower in his fifties with three older sons and a daughter, just happened to be shopping for a boat—but not any boat, an IMP (Iola Molded Plastics). A friend called Dean to tell him about the PennySaver ad for the boat Charlotte was selling. Dean drove to Charlotte’s to take a look—and got a whole lot more than he bargained for.

The rest is history. He bought the boat, but Dean was also quite taken with its kind and beautiful owner. On a whim, he asked Charlotte out on a date, one of the first since his wife had passed on. Charlotte hesitated until Dean told her they’d be going to a police academy dinner. Then she relaxed, since she knew several police officer relatives would be there. At that point, Charlotte and Dean suddenly realized how they were connected: Dean had heard of John Campbell, Charlotte’s first husband, from both his nurse daughter and police cadet son.

On their first date, Charlotte kept her distance. As they continued to see each other, each night Charlotte would race for her front door. When Dean asked why she ran to the house, Charlotte said she felt more comfortable there. She was afraid of getting close. Dean also struggled over his own feelings for the wife he missed. It didn’t take long, though, for Charlotte to see that this former officer, World War II veteran, and family man was “a pretty nice guy.”

Still loyal to their late spouses, neither Charlotte nor Dean had intentions of marrying. Both were still adjusting to life on their own, and both believed their children needed to come first. But as they continued to spend time together, they began inviting their both of their families, including in-laws, to events like holiday dinners.

About eighteen months after they’d met, Dean asked, “Don’t you think you’ll ever get lonely?”

Charlotte answered, “I don’t think so! I’m working three jobs and taking care of my family. Who’s got time for stuff like that?”

Her mother had once asked her after John died, “Honeygirl, how can you go on?”

Charlotte, always courageous, told her mother that she had to be strong for everybody.

But in the conversation with Dean, the marriage seed had been planted. Dean felt that his children knew and liked Charlotte, but respectfully, he approached his first wife’s family for their blessing, which they gave. They were happy to see him happy. With that, he proposed to Charlotte, and she decided to say yes.

To this day, the Campbell-Garrahan clan still jokes, “If you’re looking for a (spouse), just go to the PennySaver.”

The happy couple lived in Whittier for a few years, then decided to trade the California smog for the fresh air of Idaho. Accompanied by a friend who lived in the Eagle subdivision of Banbury, Dean and Charlotte picked out a nice home and property during a classic Treasure Valley inversion. Laughing over the thought of buying a home they couldn’t really see, they trusted the realtor who told them that the house had a nice view of the mountains. Every splendid thing they had been promised turned out to be true when it came to their Eagle home, and they’ve loved living there for many happy years together.

Looking back over their 34-year marriage, Dean, now 90, says with a gleam in his eye, “I bought the boat, and I’ve been paying for it ever since!”

Charlotte, 80, chuckles nearby and says, “He’s not kidding! One thing about him, he’s honest. It really did cost him!” As she calls her husband a “gentle giant,” the affection in her voice is evident.

She adds tenderly as the couple sits side by side on their sofa, holding hands, “I can thank my first husband for that boat. Because I wouldn’t be married today. How grateful I am, and we’ve been blessed. We really have.”

The Garrahans have a rare gift for bringing good people and things together. When Dean married Charlotte, he moved into her home, and his officer son, Mike, bought Dean’s place. When Dean and Charlotte moved to Idaho, Mike purchased Charlotte’s home, too, so both families’ childhood homes remained with them, the same way the boat stayed in the family.

Another thing they kept was the annual tradition of fishing at Trinidad, California each summer, something they instituted early on. When Dean and Charlotte first invited the entire family to join them, they wondered if they’d tire of it. Instead, Trinidad turned out to be the glue that cemented extended family relationships. They’ve been going to Trinidad for over thirty years, and they credit the family’s closeness to those vacations. Kids, grandkids, and great-grandkids gather for a week or more to enjoy the outdoors and each other, Campbell-Garrahan style.

When the family lost Dean’s daughter earlier this year, her wish was for a burial at sea, with her name inscribed on a plaque near the lighthouse that looks over the harbor at Trinidad.

Although they’ve been through their share of hard times, the Cambell-Garrahans have two strong, capable leaders in Dean and Charlotte. They are positive people, feeling that there are many years ahead with much to offer their children and grandchildren. They walk together every morning, enjoying the beautiful Idaho scenery. They believe that “negative stuff’ can take people downhill fast, so they focus on the positives.

The Garrahan home proudly displays a vast array of family photos on hallway walls, representing first their original families, then their combined family.

“Who would have dreamed, thirty years ago?” Charlotte says happily.

For Dean’s 90th birthday party last year, their home was carpeted in wall-to-wall sleeping bags and air mattresses. The walls echoed with talk and laughter as the smells of delicious cooking wafted from the kitchen.

“We get along well,” Charlotte smiles.

“You know what?” Charlotte muses aloud, “It’s really a miracle. It’s been a gift.”

The Garrahans note they’ve been married longer to each other than they were to their first spouses. Dean says he can’t remember a time he wasn’t married, joking that he’s been married “all his life.”

For 34 years, the Garrahans have accomplished with grace what so many couples struggle to achieve. They’ve built a loving marriage and successfully blended two large families. When asked how they succeeded at such a challenging and rewarding goal, the Garrahans point to their thoughtful decision to give their early relationship time to blossom. They allowed everyone the space and opportunity to bond naturally, and that seemed to make all the difference.

Previous: The Council
Next: Portrait of an Artist