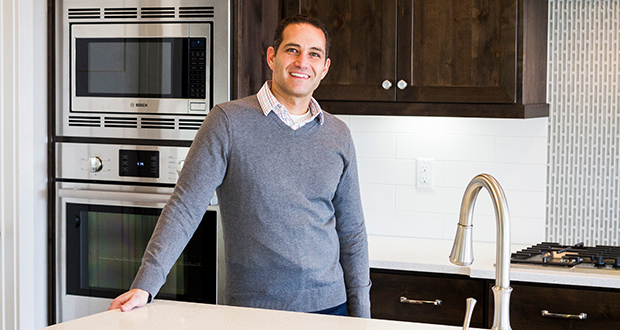 This year marks the 10th Annual St. Jude Dream Home Giveaway in Boise. I’m sure you’ve heard the ads before: buy a ticket for a chance to win a house! It’s a fun and charitable event—the proceeds from the campaign go directly to help save children battling cancer and other deadly pediatric diseases at St. Jude’s Children’s Research Hospital. What better way to donate money? While the giveaway itself is an excellent example of the good Boise can do, the story behind how it came to be is even better. Turns out, not only is this campaign a great fund raiser, but at its core an amazing community story. Three years ago, The Berkley Building Company was approached by the Dream Home organizers to be part of the program in Boise, and President Joe Atalla jumped at the opportunity. Recently, I was given the opportunity to speak with Atalla about his experience.

Atalla has been building homes since 2008. He has a background in architecture and real estate, a combination which led him to found the Berkeley Building Company. He designs the house plan for the dream home himself, and then his company coordinates the builders, the donated supplies, and the donated time of many amazing locals. The St. Jude Dream Home giveaway ties in well with the children’s health charity work that Atalla’s company is already a part of. They have built playhouses for Make-A- Wish and also for St. Luke’s Children Hospital to auction off in the past.

“As a father, I can’t imagine the horror of having a sick child,” Atalla says sympathetically when I asked him why he donates his time for this project. “When a child is sick, the devastating effects on the family are far reaching,” he remarks, noting how the illness can affect jobs, bills, and the life of the whole family. “St. Jude’s is special because they take care of everything. They don’t just heal the child, they heal the whole family,” he says.

“There is no one thing I can do that can make this kind of an impact or raise this much money for a foundation.”

Last year, $800,000.00 was raised for the hospital, a tremendous feat that could not have been accomplished without the support of the Treasure Valley. “For such a relatively small community to make almost a million dollars for the organization is heartwarming,” Atalla says.

Atalla would be the first to tell you that he couldn’t do what he does without the continued support of the community. Personal contractors donate their time to work on the house. Suppliers donate the goods. A non- profit organization, Epsilon Sigma Alpha, organize the ticket sales. Even though this is such a large national organization, there is a local push to put it all together. Atalla is always amazed at how the community comes together. “So many local small business owners help put a lot of effort into this project as well,” he says.

This year, the Dream Home will be located in the Foxtail Estates, on the corner of Linder and Chinden. Atalla designed the 2600 square foot home. Known for his secret rooms, he tries to make sure each of his designs are unique. The house has an entry courtyard, 3 bedrooms, 2 1⁄2 baths, a bonus room, as well as a den. It’s expected that the home will take about three months to complete, and will open for the pubic to view May 16th through June 21st. On April 10th, tickets go on sale and on June 28th, the giveaway will be televised live on KTVB.

Previous: More Than A Game
Next: Start Talking and Stop Pouting